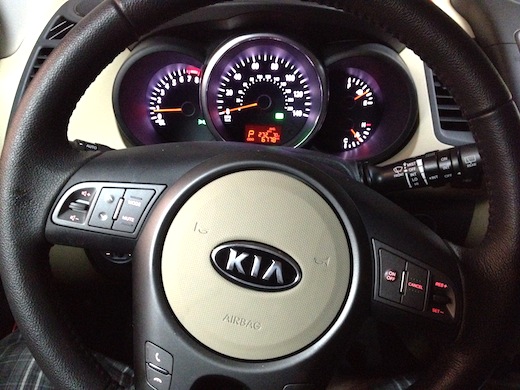 Sometimes, for reasons that are beyond my comprehension, companies offer to let me use really cool stuff for a few days to see if I’ll want to write about it. So when Kia got in touch to see if I’d like to drive one of their cars for a week, I jumped at the chance. After falling head over heels for its Optima Hybrid during a recent trip to Detroit, I was curious to see what else the company had been up to.

So last Tuesday, a Kia Soul ! (yes, that’s the model, pronounced as “exclaim”) was dropped off in my driveway. Draped in a fire-engine red paint that Kia calls Lava, it’s anything but inconspicuous. The size sits somewhere between an SUV and a large hatchback, so we’ll call it a crossover. The model that they delivered had every available option, including a $2,500 “Premium Package” that includes navigation, leather, heated seats, automatic climate control and a push-button starting system.

Now, TNW is a tech blog, not an auto blog. So I wanted to drive something that would be fitting to our geek culture. The Soul wrapped this up in spades. With 2 power ports and a USB connection in the front dash, plus another power port in the rear there was plenty of juice for our family of 4 to head on a road trip.

The Soul also looks…well…geeky. In a good way. It’s akin to the Scion xB or perhaps the Nissan Cube, though has a bit less cargo space than the former, and more than the latter. But Kia has also managed to make this toaster-on-wheels-machine fun to drive. 18-inch wheels, low-profile tires and a lot of glass around the cabin all add to the overall feel.

As for the rest of the technology-heavy features? While it’s arguable that everything in a modern car is tech-heavy, the driver-focused things consisted of Bluetooth integration, a reverse camera and LED mood lighting around the speakers.

The thing I used the most, bar none, was the Bluetooth. It interfaced directly with my iPhone 4S, pulling in my contacts list, allowing me to stream music and even giving me a readout on the dash display of my current battery life and signal strength. Call quality was stellar and the built-in navigation system of the Soul didn’t clash with the streaming audio at all.

The reverse camera is pretty slick. I’ve driven cars with them before, but not often. It took a few minutes to get used to using it instead of relying solely on mirrors, but the change came rather easily.

Oh, and about that mood lighting. Here’s what it looks like, and yes you can turn it off:

I also have to admit to geeking out a bit over the “keyless” system, which uses only a fob. If the fob is in the right proximity of the vehicle, you can lock and unlock the doors from the outside, as well as start it, without ever taking it from your pocket. It’s far from the first car to do this, but it’s the first I’ve driven with the feature.

So it’s a cool car. No doubt. Having sold cars myself, I guesstimated the price to be somewhere in the upper $20k range, and was blown away to find that this fully-loaded model came in at a mere $23,000. You can go much, much lower on price, if you give up features, but there’s almost no reason to do so unless you simply can’t afford the slightly higher payment.

On a 7-hour trip with my family of 4 and our 40-pound dog, the Soul averaged 29 miles per gallon. Mind you, that’s through the rather large hills of Tennessee and Kentucky. If you live somewhere a bit more flat, you’ll do better. The rear cargo area gives my dog more than enough room to walk around comfortably, and my 7 and 9 year old kids enjoyed the 2nd-row bench seat.

I’m a big guy, at least as far as width is concerned. Shoulder room is almost always a concern for me. The Soul was very comfortable, though I’d prefer that the center arm rest was a bit higher. The high ceiling of the Soul makes for great head room. I’m short, so I had no problem with legroom, but it looked like the Soul would be a good fit for almost any reasonable height.

So what’s the verdict? I’m sold. No, really. I’m working with a local dealer to buy a Soul that’s identical in every way save for the color. Am I suggesting that you do so? Not really. But if you’re even moderately in the market for a new car, give the Soul a shot. It’s a lot of fun, has all of the tech stuff that you need and it’s instantly-lovable.

Read next: Evernote for Windows and Web Clipper for Chrome get brand new features in today's updates