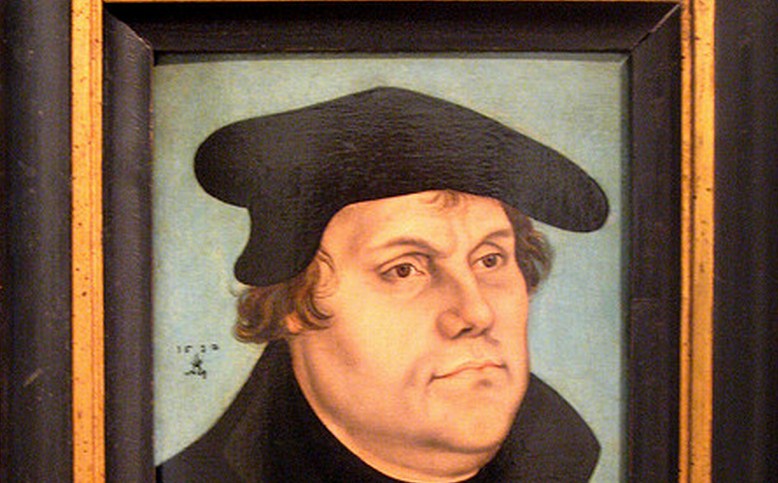 Prithee, dog, dost thou wish to treat with me? No, really, how are you doing today? Good? Alright, that’s perfect. It’s my job to bring you down to level, to cut you down a notch. Only, I’m not going to do it alone. Please meet Martin Luther.

If you don’t know Martin, he’s a rather important figure in world history, and especially the history of religion. His world-shocking 95 Thesis document, railing against the sale of indulgences, nailed to the door of a German house of worship led to the Lutheran Church (you must have heard of it), and other massive changes in the course of human progress. From Wikipedia:

His translation of the Bible into the vernacular (instead of Latin) made it more accessible, causing a tremendous impact on the church and on German culture. It fostered the development of a standard version of the German language, added several principles to the art of translation,[4] and influenced the translation into English of the King James Bible.[5] His hymns influenced the development of singing in churches.[6] His marriage to Katharina von Bora set a model for the practice of clerical marriage, allowing Protestant priests to marry.[7]

Now, sounds pretty good, right? Not a bit of it! Luther wrote extensively, and included more than a few zingers in his work. A website has collected some of the best of Luther’s barbs and insults and compiled them into nearly never-ending list of verbal slams.

Some of our favorites:

Are you not mad, and crazy, and crass Nestorians, not knowing when you say yes and when you say no, stating one thing in the premise and another in the conclusion? Away with you stupid asses and fools!

Even Lucifer was not guilty of so great a sacrilege in heaven, for he only presumed to be God’s equal. God help us!

You are the cousins of the Antichrist.

You know less than does a log on the ground.

Those are epic. Hit the site for more. Of course, every entry is well sourced, so you can check its context for yourself. Luther’s legacy lives on, in more ways than one.