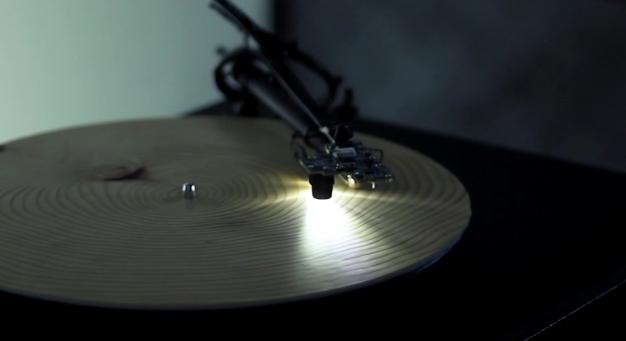 If you’re a fan of experimental technology, Arduino hacking or post-modern music, this project is going to make you smile. Years is a piece by Bartholomäus Traubeck, and it consists of a record player that plays slices of wood. Yep, you read that right.

As you probably know, you can estimate how old a tree is by counting the rings across its trunk. This record player reads that “ring data” and translates it into music. More specifically, the tree’s year rings are analyzed for strength, thickness and growth rate. All of these details affect the final sound.

This data serves as basis for a generative process that outputs piano music. It is mapped to a scale which is again defined by the overall appearance of the wood (ranging from dark to light and from strong texture to light texture).

The foundation for the music is certainly found in the defined ruleset of programming and hardware setup, but the data acquired from every tree interprets this ruleset very differently.

As you’ll see in the video below, Years utilizes a wooden disk created out of a finely sliced tree trunk. It is similar in thickness and shape to a traditional record. And instead of the typical needle you’d find on most record players, it’s been replaced by a hacked PS Eye Camera.

The resulting music is eerie and a bit whimsical. There’s a definite pattern present, and cracks or knots in the wood yield a particularly disruptive response.

The idea of turning something physical into music creates a new sonic identity. It would be very interesting to apply the same idea as technique for reading other objects too, and the technique of mapping things like color to specific notes or chords could become an awesome inspiration tool for musicians!

Read next: The end of a micro era: When to quit that meme