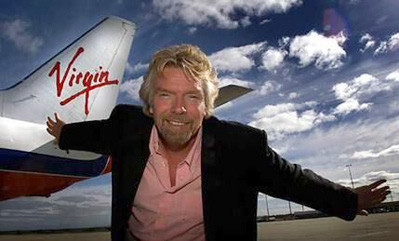 The entrepreneur’s entrepreneur Richard Branson has just gone and bought himself a new toy for his private island, an underwater plane called The Nymph.

Costing a mere $575,000, the Nymph can go down into the water up to 130 feet, allowing people to view the depths of the sea in the comfort of a sleek plane. It can hold up to three people at a time including the pilot, and was built using fighter jet technology.The Necker Nymph’s typical speed is 2 to 5 nautical miles per hour and it can dive more than 100 feet, said Karen Hawkes, a spokeswoman for Hawkes Ocean Technologies, the company that designed the Nymph.

“Gliding on the water’s surface like an aeroplane on a runway, one of the three pilots will operate the joystick to smoothly dive down,” Virgin explained in a statement released Friday.

The Necker Nymph claims “near-zero” environmental impact because its “positive buoyancy prevents the sub from landing on a reef, and its low light and noise emissions ensure the fragile ocean ecosystems remain undisturbed,” Virgin said.

Branson plans to lend the plane out to guests of his private island for $25,000 a week, pocket change to his typical visitor.