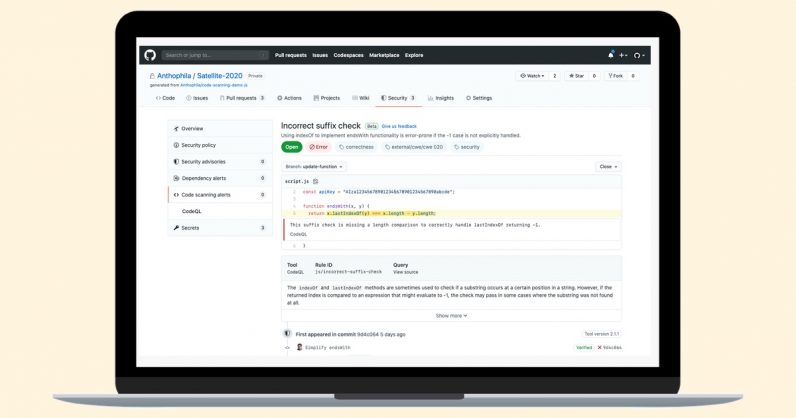 The company says that code-scanning is a native experience, and it scans every ‘Git Push’ for potential exploits. It uses CodeQL, a tool to query the codebase for potential bugs, to find vulnerabilities in your project. This feature is free for any open-source project.

[Read: GitHub Codespaces lets you code in your browser without any setup]

Along with this, GitHub also introduces secrets scanning for private repositories. Notably, this feature was already available for public repositories under the token scanning name since 2018.

If you hosting your code on GitHub, but running an instance on any popular cloud service such as AWS, Alibaba Cloud, Google Cloud, or Azure, these services might issue a secret token or a private key. So, if your secret — such as a password or a key– is stored in your publicly readable file, GitHub will notify you and urge you to move it to a secure location. You can check the list of cloud providers this feature supports here.

For its enterprise customers, the company also launched private instances, a server instance managed by GitHub, and tuned according to the company’s requirement.

He added that with these security features a major theme with these features is not just to make it easier to fix vulnerabilities and alert users, but to prevent them from ever getting introduced.