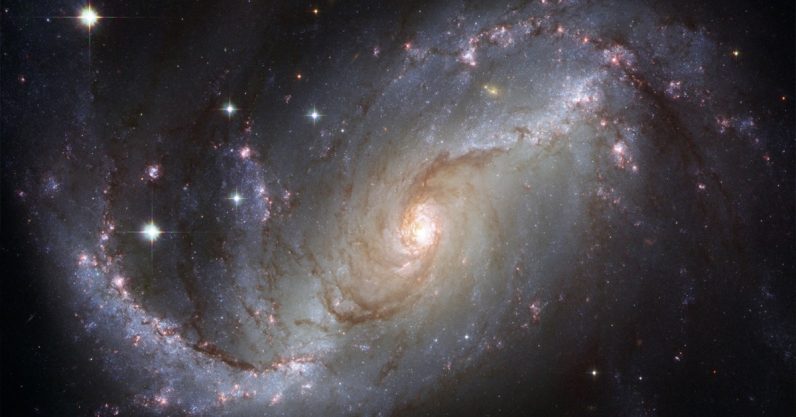 Current models of massive galaxy formation suggest that they evolve as part of a slow growth process, gradually increasing in size through mergers with smaller galaxies and the accumulation of clumps of hot gas. This means that most galaxies should have reached massive size relatively late in the course of the Universe’s 13.8 billion years history.

However, the discovery of a massive rotating disk galaxy, much like our own Milky Way, when the Universe was just 1.5 billion years old calls these models into question.

The discovery that the galaxy DLA0817g — nicknamed the Wolfe Disk after the late astronomer Arthur M. Wolfe — existed at such an early stage in the Universe’s development was made by a team of astronomers using the Atacama Large Millimeter/submillimeter Array (ALMA). At 12.8 billion light-years from Earth, it is currently the most distant disk galaxy ever observed. This means it is also the furthest back in the Universe’s history.

The fact that such a massive galaxy, spinning at 170 miles per second, was able to exist when the Universe was just 10% of its current age, strongly suggests that galaxies may grow a lot more rapidly than currently believed. The team’s research is published in the journal Nature.

“With the unparalleled power of ALMA, we have revealed a massive, rapidly rotating disk galaxy that resembles our Milky Way but formed only 1.5 billion years after the Big Bang,” says co-author J. Xavier Prochaska, professor of astronomy and astrophysics at the University of California Sant Cruz. “The ‘take-home’ message is that galaxy formation can proceed rapidly enough to generate massive, gas-rich galaxies with surprisingly “cold” kinematics at early times.”

The existence of early rotating massive galaxies rich in gas has been suggested by previous research, but this is the first clear evidence of such a galaxy.

“While previous studies showed indications of rotating, disk-like galaxies, these ALMA and VLA data provide unambiguous evidence that gas-rich, massive cold, and rotating disk galaxies occur as early as 1.5 billion years after the Big Bang,” says Prochaska. “Such a well-formed system contradicts many, although not all, simulations of galaxy formation at early times.”

The team’s discovery of the Wolfe Disk challenges commonly posited galaxy formation models that suggest such cosmic structures should only begin to show well-formed discs when the Universe is around six-billion years old. Finding the Wolfe Disk at only 1.5 billion years means that there could have been other dominant formation processes.

“Most galaxies that we find early in the universe look like train wrecks because they underwent consistent and often ‘violent’ merging,” explains lead author Marcel Neeleman of the Max Planck Institute for Astronomy in Heidelberg, Germany. “These hot mergers make it difficult to form well-ordered, cold rotating disks as we observe in our present universe.”

This rapid formation rate leaves an important question to be considered. “The key challenge,” Prochaska says “is to rapidly assemble such a large gas mass while maintaining a relatively quiescent, thin and rotating disk.”

The Wolfe Disk was first observed by Neeleman and his team when they examined the light from a more distant quasar back in 2017.

The team discovered that the light from the quasar was being absorbed as it passed through a reservoir of hydrogen gas. They were able to conclude that such a massive cloud of hydrogen was surrounding a galaxy. This is a technique that is often used by astronomers to spot fainter galaxies, especially normal galaxies in the early Universe.

“The fact that we found the Wolfe Disk using this method, tells us that it belongs to the normal population of galaxies present at early times,” says Neeleman. “When our newest observations with ALMA surprisingly showed that it is rotating, we realized that early rotating disk galaxies are not as rare as we thought and that there should be a lot more of them out there.”

The discovery and its further investigation were only made possible thanks to the incredible sensitivity of ALMA which the team used in conjunction with the Hubble Space Telescope and the Very Large Telescope (VLT) array, based on the Cerro Paranal mountain in the Chilean desert.

Aside from the importance of the discovery, and its significance to our understanding of how galaxies evolve, for Prochaska the study has an importance on a much more personal level. The research is the culmination of the work of his Ph.D. advisor and astrophysicist, Arthur Wolfe, who passed away in 2014.

“In 1986 he discovered and leveraged a new technique to discover distant galaxies in an era when only a handful was known,” Prochaska explains. “Then, in the 1990s when I joined the project, we collected data with the then-brand-new Keck telescopes that suggested these galaxies may be rotating disks, not so unlike our own Milky Way.

“We were widely criticized because this picture did not conform to the leading theories of the day.”

Prochaska says that it was then a matter of waiting for technology to catch up in order to test Wolfe’s theory, with ALMA finally allowing this testing to be realized.

“It is only unfortunate that Art didn’t live long enough to witness it himself,” concludes Prochaska. “This is why we memorialize him by naming this galaxy the Wolfe Disk and we are encouraging astronomers to refer to the class of objects as Wolfe Disks.”

Read next: How do marketers actually connect with a post-COVID audience? This might help