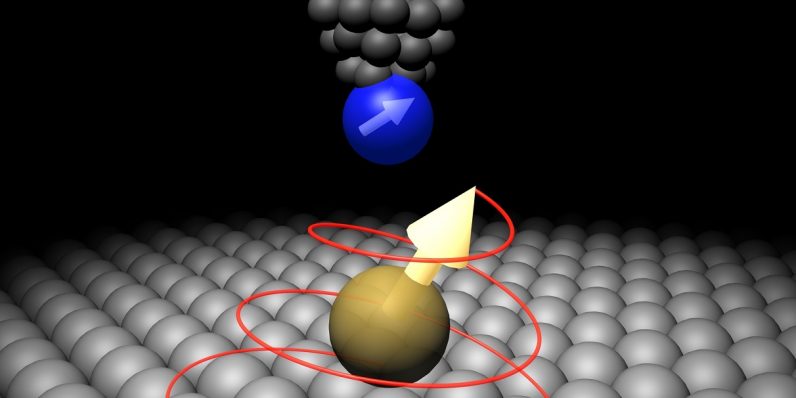 IBM Research today revealed a breakthrough nanotechnology technique that allows researchers to position individual atoms and control their quantum properties. This could be a watershed moment on the path to generally useful quantum computers.

The research team developed the technique in order to build a quantum computing simulator. Binary computers – like the kind you’re using to read this article on – only understand ones and zeros. They work like a light switch, they’re either on or off. Quantum computers have a third option. They can be both on and off at the same time. This is because of a quantum property called superposition.

Superposition is like being able to flip a light switch halfway on to create a weird state that’s neither dark nor light, or perhaps it’s both dark and light.

IBM Research created an analog superposition simulator by making titanium atoms exhibit magnetic properties analogous to quantum superposition. In essence they used a special device called a Scanning Tunneling Microscope (STM) with a needle-like instrument to find the atoms and push and pull them around.

According to IBM‘s blog:

In our experiments, we use a quantum property of a titanium atom called “spin” to represent one qubit. The spin property makes each titanium magnetic, so it behaves like a tiny compass needle. Like a magnet on a refrigerator, each titanium atom has a north and south magnetic pole. The two magnetic orientations define the “0” or “1” of a qubit. We placed the titanium atom on a specially chosen surface, an ultra-thin layer of magnesium oxide, to protect its magnetism and allow it to show off its quantum personality.

Apparently titanium atoms are brimming with personality. The researchers used microwave bursts to arrange, order, and direct the atoms. The bursts emanated from the tip of the STM and forced the atoms to spin one way or another, like orderly ballroom dancers. Through this technique, the researchers successfully simulated quantum entanglement in a 2-qubit quantum system.

Aside from being mind-breakingly cool – just making individual titanium atoms dance on the point of a needle, no big deal – this research has immense implications for the field of quantum computing. Despite a litany of recent breakthroughs, we’ve been in a sort of “pre-abacus” age where physicists have been brute-forcing quantum interactions with lasers and experiments that jump through more hoops than an NBA season has.

This feels like an abacus moment. If this technique is all it’s cracked up to be, we could be looking at an entirely new approach to researching quantum computing problems.

We haven’t had the opportunity to read the entire research paper yet, so we’re still sorting out the details. But, considering co-author Kai Yang’s previous work embedding memories in single atoms was likely the precursor to this breakthrough, this is exciting research from IBM.

Read next: Facebook is about to reveal its News tab