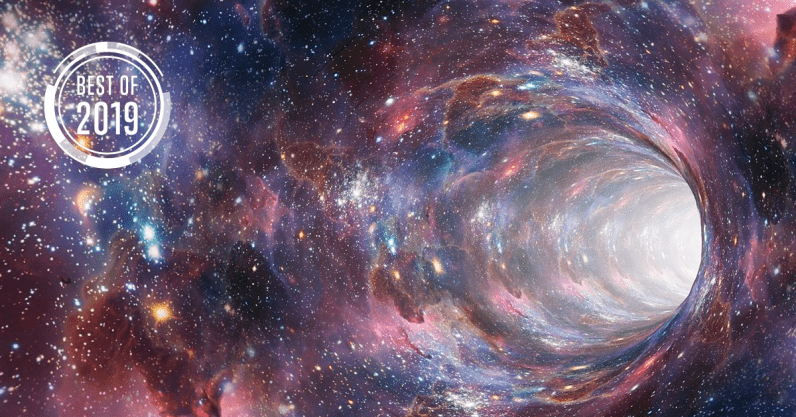 An international team of researchers recently placed an entire molecule into a state of quantum superposition. This huge breakthrough represents the largest object to ever be observed in such a state – essentially occupying two places at once. And it may just be the eureka moment that defines our species’ far-future technology.

Quantum physics is about as close to a faith-based field of scientific study as there is. It’s not our fault, the universe is infinite and complex and we’ve been here for a relatively short amount of time. It’s excusable that we still don’t understand all the rules and, in lieu of a blueprint, we’re forced to come up with theories to explain the things we don’t know.

Up until recently, we didn’t know if the last century’s worth of work in the field of quantum physics would ever truly translate into the classical world. Superposition is one of the basic concepts of quantum mechanics. Essentially, the idea involves an object being in more than one different “arrangement” or configuration at the same time. For example, if something could potentially be either “here” or “there” in the classical world, it is both “here” and “there” in the quantum world.

When Physicist Markus Arndt and an international team of researchers observed an entire molecule in a state of quantum superposition, they likely became the first humans to witness evidence of the reconciliation between the quantum and classical worlds. Or, at a minimum, they’ve recorded what appears to be the strongest evidence yet for the bridge between them.

What we see and experience doesn’t always jive with what’s supposedly going on in the quantum world. Have you ever seen a tree in two places at the same time? This isn’t to say they “saw” superposition with their eyes, but they observed the quantum state through measurements.

According to Arndt, this is a breakthrough that, at a larger scale, would boggle the mind. He told Popular Mechanics:

The experiments we do show that very complex things can be prepared in states that you would never believe existed if you saw them for a billiard ball, a man, or a car. But why should nature be different on a small scale? Is quantum physics not valid at the macroscopic scale?

Does this mean we’ll be able to put sports equipment, people, and vehicles into quantum states one day? Maybe. Scientists are looking for a hard limit to superposition. But what would that even mean?

One theory, based on what would obviously be far-future technology, involves harnessing the powers of quantum mechanics to place humongous objects – think planets and stars – into a state of superposition. This would, theoretically, allow anyone with the “place giant things into superposition” app on their iPhone (you don’t know how they’ll operate these things either) to manipulate space-time through the precision distortion of gravity waves.

This would effectively be time-travel, allowing humans to move about through the cosmos with relatively little regard for the passage of time – at least in small bursts, perhaps even arriving in the future without having aged.

That’s getting a bit ahead of ourselves, however. Arndt and his colleagues didn’t just snatch a molecule out of thin air and force it into superposition. They created a synthetic molecule made of up to 2,000 atoms and a special interferometer just to create the perfect conditions for their observation. It could be a millennia or two before we’re at the billiard ball or planet-sized state of quantum experimentation.

But, according to the team’s research paper, we have a road map to the future:

With advances in beam sources for biomolecules and metal clusters, techniques to cool the particles below 80K, and refined grating and imaging technologies, our experiment is scalable and will push matter-wave interference and macroscopicity tests by another order of magnitude.

Read next: Magic: The Gathering is getting a My Little Pony crossover set