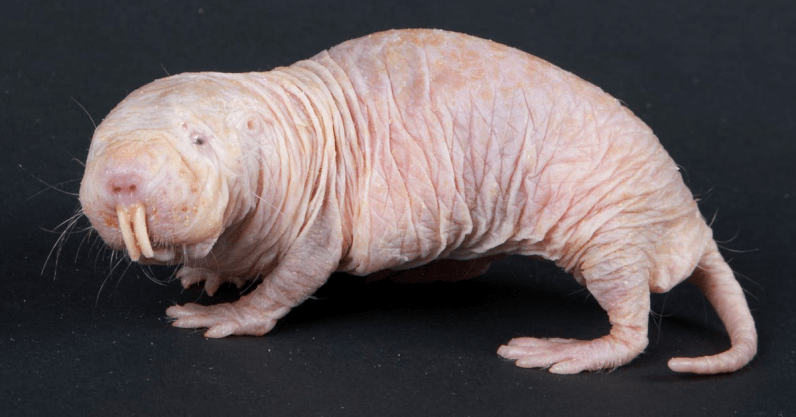 The naked mole-rat is perhaps one of the most bizarre beasts on the planet. At first glance, it looks like little more than a cocktail sausage with legs and teeth. But beneath its wrinkly pink skin, this creature’s strange and beautiful biology has me fascinated – so much so that I set up a whole research group devoted to studying them. Largely immune to cancer, impervious to some forms of pain, and seemingly blessed with the elixir of life, you may well owe your life to them one day.

As the name might suggest, naked mole-rats buck the mammalian trend by almost completely lacking hair or fur. Living underground in complex networks of tunnels in East Africa, their thermally stable environment means that a few orientation-aiding bodily hairs and facial whiskers are all they need. Lacking evolutionary pressure to regulate their body temperature, they’re also the only known cold-blooded mammal on the planet.

The way naked mole-rats mate and socially organize is more akin to certain insect species than to mammals. Like some species of bees and ants, naked mole-rats are eusocial, living in 100-strong groups headed by a sole breeding female, the queen. But while insects command their colonies with pheromones, the naked mole-rat queen uses physical aggression to keep their groups digging tunnels, foraging, and defending entrances.

A key tool for both digging and combat is their teeth. Their incisors are exterior to their lips, so that when they bite through hard soil they don’t get a mouthful of earth each time. Naked mole-rats can also move their lower incisors to manipulate objects, and have a large sensory area of their brains dedicated to their teeth in the same way that hands have dedicated brain space in humans.

The peculiarities of naked mole-rat behavior are captivating in themselves. However, to most scientists, what makes them really exciting is the potential some of their incredible biology holds for making biomedical breakthroughs.

The naked mole rat’s resistance to cancer, diagnosed in humans every two minutes in the UK alone, is a particular area of focus for researchers. In studying why there are just a few documented cases worldwide in naked mole-rats, scientists are hoping to identify new ways to prevent or treat the deadly disease.

As yet, we’re not exactly sure what gives them their resistance. Some evidence suggests that a key difference in one of the meshwork of substances providing structural and nutritional support to cells prevents them from reproducing uncontrollably. However, others have observed different results, so further investigation is needed.

Not content with just being immune to cancer, naked mole-rats are also impervious to some normally agonising chemical stimuli, such as capsaicin (the substance that makes chilli peppers taste hot) and acid (what gives lemon juice and vinegar their kick). For their acid-insensitivity, researchers are clearer about why. A subtle difference in one particular molecule of the animal’s pain-sensing nerves turns acid into an anaesthetic. That is, rather than stimulating pain-sensing nerves, it actually numbs them – just like an anaesthetic that your dentist administers before the drilling starts. Sadly, this superpower only works with specific chemical stimuli – heat and pressure are just as damaging to them as us.

Scientists are now further studying the naked mole-rat to see whether we might be able to make the human pain system similarly impervious to acid pain. This could be extremely useful for cancer and arthritis sufferers, for whom build-ups of acid in body tissue can be a major contributor to chronic pain. The molecule responsible for insensitivity to acid in mole-rats also plays a role in human genetic conditions that drastically alter pain perception, and as a result of this convergent research, potential painkillers targeting this molecule have made it into clinical trials in humans.

Naked mole-rats are also highly resilient to low oxygen conditions. Their nerve cells can function for almost one hour in the complete absence of oxygen, by instead using fructose to power energy production. In studying this remarkable ability, my lab and others are hoping to uncover novel treatments to prevent brain damage in stroke patients.

Naked mole-rats are also renowned for their longevity. Broadly speaking, a larger body equals longer life in mammals. Standard lab mice weigh around 35 grams, and usually live a maximum of two to three years. Naked mole-rats can be up to twice as heavy, so might be expected to live four to six years, but can actually survive for more than 30 years in captivity. That’s longer than the lifespan of polar bears and giraffes. And while humans experience many ageing-associated health problems (for example, osteoarthritis), naked mole-rats appear to age without issue. Research into the ageing processes of naked mole-rats is only in its infancy, but could have multiple implications for treating ageing-related conditions in humans.

Naked mole-rats may look comical, but their magical biology is no laughing matter. Studying their hidden powers will not always result in preventions, cures and treatments for human ailments because of fundamental differences between the species. However, every new insight has the potential to lead to a breakthrough – as animal research has continually done throughout recent history. By unlocking the secrets held within their cells in a responsible manner, we may one day improve countless human lives.

This article is republished from The Conversation by Ewan St. John Smith, University Senior Lecturer in Pharmacology, University of Cambridge under a Creative Commons license. Read the original article.