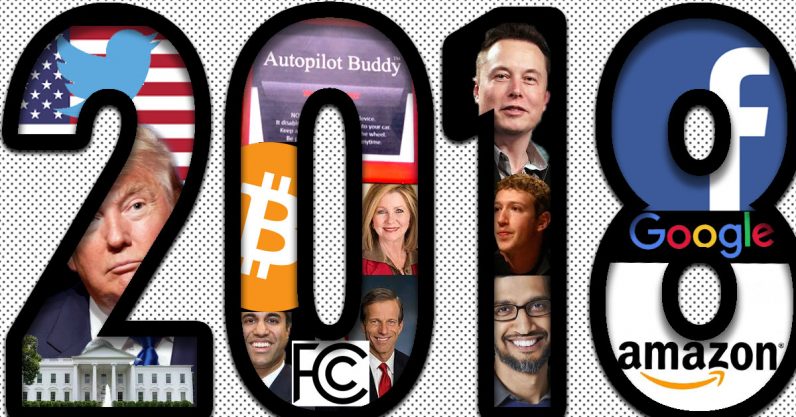 Here at TNW every day is a present, so it’s always our birthday. But we understand that the world can be a bit of a bummer for everyone else. After all, we write about the dark underbelly of science and technology: Elon Musk.

Kidding, actually there’s a lot more wrong with science and tech than just Musk’s penchant for accusing random cave divers of pedophilia. Or his Trumpian war against the mainstream media. Or his insane tweet declaring that Tesla would go public. Or him throwing his garbage into space.

If you thought I was going to bring up Musk smoking pot on a podcast: don’t be ridiculous. That was one of the only normal things he did all year — in fact we think more tech CEOs should imbibe.

Also, Musk was in California, where such activities are perfectly legal. What wasn’t normal was NASA sticking its nose into his business over it. Poor play, NASA.

And Musk certainly wasn’t the only big tech CEO who was out of control. Mark Zuckerberg spent the year apologizing, bragging about his reading habits, and basically turning Facebook into an evil empire worthy of applause from Skeletor and Phillip Morris.

Jack Dorsey at Twitter came under fire this year, as did Jeff Bezos. But of all the big tech CEOs, Google’s Sundar Pichai may have taken the rotten cake this year.

I’m not even sure to begin, but here’s a few links to explain just some of what’s gone wrong in Android-ville.

It wasn’t just big tech that went off the rails in 2018. Science and academia also went a bit nuts. And, of course, US politicians were even worse in the year net neutrality officially died.

But science first (because it should know better). We expect nonsense from big tech. But cheating on white papers? Hiding research behind a paywall? Systemic misogyny and sexual harassment? Ridiculous.

And, speaking of bad science, there were enough experts penning articles declaring quantum computing a dead-end to make us all wonder if there was some sort of a troll-war going on in the world of physics.

We remind those naysayers of the immortal words of IBM‘s Watson. No not the AI, former company president Thomas Watson who, in 1943, said:

I think there is a world market for maybe five computers.

But, where science experts are entitled to their opinions, and deserve to be respected for contributing to the debate, a number of US politicians just spent 2018 proving they were ignorant, corrupt, or both when it came to matters concerning technology and science.

There were also some engineering downfalls in 2018, including one in particular which deserves mentioning again. Tesla’s continuing use of the term Autopilot for its cars assisted-driving feature may not be new – it’s still disappointing – but it this year it inspired a truly evil product: Autopilot Buddy.

It’s a device you place on your Tesla’s steering wheel so that the car thinks your hands are on the wheel, essentially disabling the warning system designed to prevent people from using Autopilot as – well, as an autopilot. Because it’s not. It’s an assisted-driving system that’s only safe to use if the human driver is engaged and able to take over at a split-second’s notice.

Considering that at least two people have died as a result of misusing Tesla’s Autopilot system by ignoring warnings to put their hands back on the steering wheel, it seems reprehensible to market a product that overrides that warning system.

In a lot of ways, 2018 sucked, but hopefully that wasn’t your experience. And, no matter how good or bad your year was, we hope 2019 is a better one.