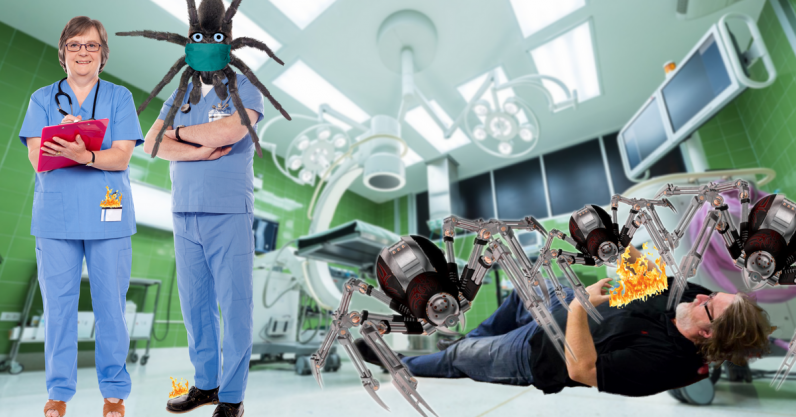 If I was a scientist, I’d hope everything I created would weird people out.

This is why I’ve got such glowing admiration for the team of researchers who have created a tiny robot spider that could one day potentially conduct operations inside humans. Bravo, team, bravo.

An issue facing medical scientists has been creating non-rigid robots small enough to work in environments that are impossible for surgeons to access. While there has been some success in this field – some have managed to make soft, centimeter-sized devices for example – overall, this goal has evaded experts.

Researchers at – and take a deep goddamn breath here – Harvard’s Wyss Institute for Biologically Inspired Engineering, Harvard John A. Paulson School of Engineering and Applied Sciences (SEAS), and Boston University, have developed a new process that allows the creation of millimeter-sized flexible robots. Published in Advanced Materials, the researchers outlined how they made a tiny device that had micrometer-scale features, meaning it could operate in small, inaccessible areas.

And when you say tiny device…

I, of course, mean a robotic soft spider modeled after the Australian peacock spider. Which, for your information, looks like this:

They created their version of this horror from a single piece of an elastic-like material. And, it looks like this:

Right, but what makes this freaky robot spider so special?

I’ll hand this over to Shelia Russo, one of the co-authors of the study: “The smallest soft robotic systems still tend to be very simple, with usually only one degree of freedom, which means that they can only actuate one particular change in shape or type of movement.”

In other words, this would make them pretty useful for micro-operations that involve movement in more than one direction, which, and let’s be honest here, is most of them.

She continued: “By developing a new hybrid technology that merges three different fabrication techniques, we created a soft robotic spider made only of silicone rubber with 18 degrees of freedom, encompassing changes in structure, motion, and color, and with tiny features in the micrometer range.”

The idea behind creating the, uh, soft robot spider was to show the potential of this new fabrication process. This is a first-of-its-kind technology called a Microfluidic Origami for Reconfigurable Pneumatic/Hydraulic (MORPH) device.

Right – how does this new process work though?

It’s a long and complex process involving a variety of techniques that take place over several days. Basically, thin layers of elastic silicone are cut out and placed on top of each other. Some of these layers also contain channels, which can then be pressurized to get the device into its final shape. It’s not a too dissimilar process from origami (hence the ‘O’ in the MORPH acronym).

This video has a lot more information regarding the specifics:

What’s the future of this tech then?

Wyss Institute Founding Director, Donald Ingber, sums it up best: “The MORPH approach could open up the field of soft robotics to researchers who are more focused on medical applications where the smaller sizes and flexibility of these robots could enable an entirely new approach to endoscopy and microsurgery.”

So, arachnophobes best watch out: soon your insides might be crawling with soft robot spiders. In a good way, I hope.