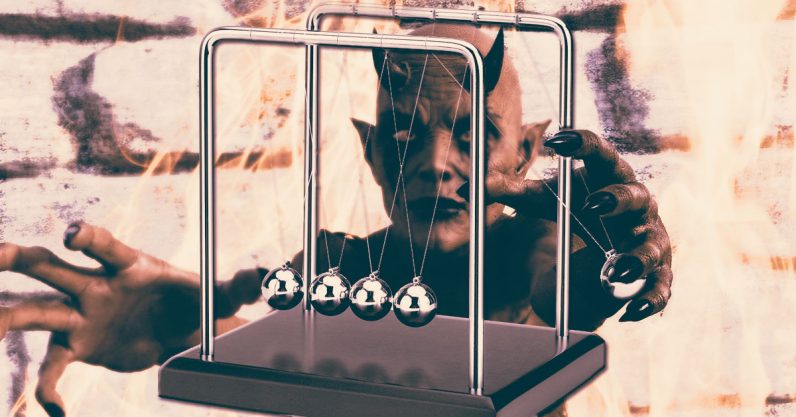 An international team of physicists recently published research indicating quantum computers aren’t the way to go for those hoping to break the second law of thermodynamics, the one that says there’s no free lunch in the universe.

Perpetual motion has long been the dream of those of who don’t want to do any work but still want to reap the rewards of a job well done. If you can imagine a machine that requires no fuel to run, or a motor capable of producing an electromagnetic current without consuming any resources, you can see why scientists have pursued perpetual motion for thousands of years.

Before we dive into quantum computers and perpetual motion, a little background is in order.

Unfortunately, like the second law of perpetual motion says, there’s no such thing as a free lunch. You simply can’t get something for nothing, even if you cheat. A clever scientist named James Clerk Maxwell came up a wacky theory about a demon that had the world of science confused and befuddled for about a hundred years before anyone figured out the riddle.

In Maxwell’s theory, there’s a box filled with molecules bouncing around at two different speeds: fast and slow. The fast molecules are warmer than the cold molecules, because that’s part of how thermodynamics work. Unfortunately, when the molecules are all mixed up – full of entropy – there’s nothing useful about them.

However, if you were to put a demon above the box (don’t ask me why it has to be a demon, probably because people couldn’t fathom AI back in 1867) who could open and close a door in the box letting one molecule at a time move from one side to other, you could regulate the temperature of the box.

So, imagine our demon (or AI, if you prefer) doing its job perfectly until all the fast molecules were on one side, and all the slow molecules were on the other. Once that happened you could get “work” out of the box. A temperature fluctuation like that could be used to generate power, for example driving a gear or piston. If you were able to mix up and sort the molecules over and over without using any energy, you’d have something for nothing.

This bugged the hell out of scientists for a long time until someone figured out that the “information” in the demon’s head was responsible for the “work” produced by the molecules. And because the demon had to perform calculations, host and recall memories, and make predictions, it was increasing entropy in the universe. The damn demon was costing the universe more energy than the box was producing – and that’s exactly what the second law of thermodynamics states: entropy is always increasing.

But, if we’ve learned anything about quantum computers in the past few years, it’s that they just don’t give a dang about rules, laws, or physics. Quantum physics are unruly and punk rock, but sometimes that’s a good thing. The researchers hypothesized that quantum particles, notorious for breaking the rules of physics by being in two places at the same time, could be the secret to perpetual motion.

So here’s the way it works: quantum particles can be excited or grounded, they’re like teenagers that way. When they’re excited we can exploit them for work by grounding them – again, just like teens. All a scientist has to do is measure what state the particle is in and then decide whether to ground it, or leave it be if it’s already grounded.

This never worked with classic particles because it takes energy to ground or excite a particle. But, since quantum particles can be grounded and excited at the same time — a phenomenon called superposition — the researchers had an interesting idea. The mere act of observing a quantum particle makes it change. If you look at an excited particle it’ll ground itself, so the scientists wondered if this could be used to get something for nothing.

But, just like other punk rockers who fought the law and lost, quantum particles are no match for the will of the universe. Looking at the particles caused them to change, which meant the scientists would never be able to know ahead of time whether a specific particle needed grounding or not. And looking at them again was like looking at an entirely different particle.

When the scientists tried to observe the particles using a stealthy technique that didn’t disturb them enough to cause them to change, they were able to discern whether a particle was in an excited state or grounded, but they weren’t able to act on this information because that’s when things got weird.

The stealthy technique that allowed the scientists to determine the state of a quantum particle involved sending photons of light into the system and measuring the photons that came back. Unfortunately, only about half of the photons return and the others are lost. The lost ones aren’t measurable, but they still affect the system. In essence it’s a puzzle that changes if you look at it, and if you sneak a glance it’ll change all the parts you can’t see so that any measurements you glean are worthless.

According to Kater Murch, associate professor of physics in Arts & Sciences at Washington University in St. Louis, and an author on the team’s research paper:

Do the rules of thermodynamics for a macroscopic, classical world still apply when we talk about quantum superposition? We found that yes, they hold, except there’s this weird thing. The information can be negative.

There’s no easily explained reason for this, perhaps quantum systems are arbitrarily mean. Maybe Maxwell was on to something when he chose a demon to represent his free lunch theory instead of an angel.

The fact that a quantum system can take away information that you already have by changing itself just because you’ve observed it is beyond strange. The more we learn about the universe, the more complex and odd it’s revealed to be.

Read next: Gamefly to shut down its streaming service at the end of August