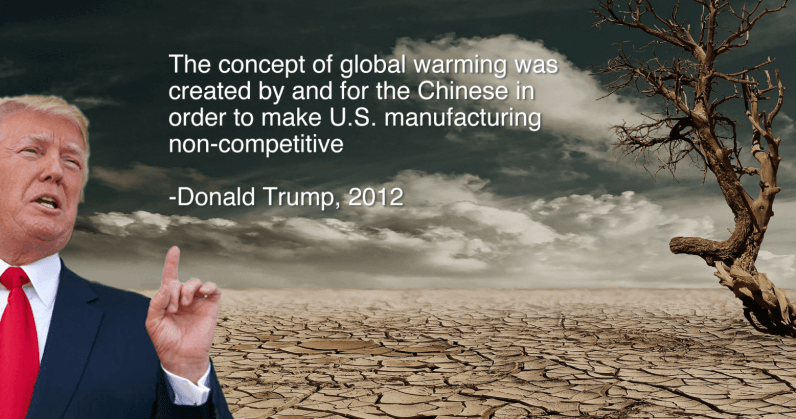 The last time Earth experienced a cooler-than-average month, a non-insignificant percentage of our readers hadn’t been born yet. Ronald Reagan was President, “Like a Virgin” was the earworm of the moment, and I was two years old.

Since that fateful December, we’ve been on an incredible run of 400 months with above-average temperatures, according to scientists from the National Oceanic and Atmospheric Administration.

Except, it does exist, and we’re the ones causing it.

It’s getting hot in here

To come to the stated conclusion, climate scientists use the 20th century average as a benchmark. It’s a long enough period allowing for several cycles of climate volatility, while still being short enough not to skew the average too much from the days when we weren’t as reliant on fossil fuels.

While Earth is undeniably getting hotter, the United States is experiencing somewhat of a cool down.

Last month, North America experienced its coldest April since 1997, and 13th-coldest on record — 2.2 degrees below average. This is a stark contrast to Europe, which had its warmest April on record, and Australia, its second warmest.

Looking back to last year, April was unseasonably warm across most of the globe. Argentina experienced its warmest April on record, and Pakistan suffered through a miserable 50.2 degree (122.4 degrees Fahrenheit) day.

It’s this, though, which leaves a window for climate change deniers to attempt to crawl through. And they definitely try. Take this comment, to CNBC, by EPA chief Scott Pruitt:

I think that measuring with precision human activity on the climate is something very challenging to do and there’s tremendous disagreement about the degree of impact.

Except, there’s not. The science on this is clear: climate change is real, and humans are causing it. According to NASA, 97 percent of scientists agree that climate change is real, and that humans are the likely culprit. For context, that’s about the same rate (98 percent) as those who believe in evolution, and significantly more than the number of scientists who believe vaccines should be required (86 percent).

But herein lies the problem: while the scientific community may overwhelmingly agree on a topic, that doesn’t mean the general public does. Take genetically modified foods. 88 percent of scientists agree that they’re “generally safe” for human consumption. Only 37 percent of the public agrees.

As for climate scientists, only 39 percent of people report “strong” trust in the information they report. That’s bad news. For the bulk of the population, this means relying on second-tier information. Instead of trusting those in the field, charting the changes and taking quantifiable measurements, they instead rely on reports from sources that could be less-than-reliable. And many of these reports are funded by those who stand to profit most by lifting regulations that could slow climate change.

One of those companies, Shell, seemingly understood the impact of fossil fuels on climate change since the 1980s. As you might expect, they didn’t exactly publicize their findings. Quite the opposite, in fact. According to Scientific American:

Like other energy companies, Shell also has been a member of lobbying and trade groups that promote climate skepticism and oppose climate policy, including in recent years. The company was part of the American Legislative Exchange Council, a group that raised doubt about mainstream climate science, until 2015.

Exxon, on the other hand, reportedly knew about the risks of climate change, and its role in causing it, since the 1970s. In a 1982 memo, the company revealed, internally, that slowing climate change would “require major reductions in fossil fuel combustion,” and unless that happened “there are some potentially catastrophic events that must be considered.” “Once the effects are measurable,” the memo continued, “they might not be reversible.”

Regardless, the company continues to lobby Washington lawmakers, spending over $11 million last year alone to fight climate change initiatives or to buy influence in shaping policy.

Lastly, there’s the fundamental misunderstanding of climate and weather. Science, in this case, is partly to blame.

When oceanographer Wallace Smith Brocker penned a paper called “Climate Change: Are We on the Brink of a Pronounced Global Warming?” back in 1975, it’s the latter phrase that stuck: global warming. For two decades, both scientists and the general population referred to the climate change phenomenon as global warming, a misnomer we later put to bed after learning that increased emissions wouldn’t necessarily warm the planet everywhere — but would lead to significant climate shifts by region.

The global warming epitaph persisted, even as our views on climate change have shifted as we better understood the science behind it. So as the United States contradicts the trend of global warming, its 2.2 degree cool down doesn’t mean we’ve slowed climate change — especially as most of the rest of the world bakes under record high temperatures.

This lack of understanding, unfortunately, still leads to comments like this one.

It's freezing and snowing in New York–we need global warming!

Put simply, weather is a short term pattern of warming and cooling whereas climate records often encompass years and decades. Weather, is the near-term: a cold day, an unseasonably warm week. Climate, is 400-plus months of hotter-than-average weather.

Until we understand the difference, we’re all going to have to suffer through government leaders (or your crazy aunt on Facebook) who equate cold weather with “climate change hoax.”

Ultimately, all of this was just the long way around a simple fact: something’s gotta give.

There’s the media. Unfortunately, public trust in the media when it comes to delivering climate change news is about the same as it is for energy industry leaders. Both groups, in a Pew Research poll, saw only seven percent of respondents say they place “a lot” of trust in either institution.

That leaves politicians. If you thought the prospects were bad with media or energy industry leaders, the same poll showed only four percent of respondents trusted elected officials to give full and accurate information on climate change. That’s fair, I mean we did elect a man who appointed a climate change denier to head the EPA and then look the other way when lobbyists paid for his Washington D.C. condo.

So what’s that leave? Hell, I don’t know. I’d imagine it probably starts with voting in the midterm elections though.

Read next: Steam's app for streaming PC games to your phone works like a charm