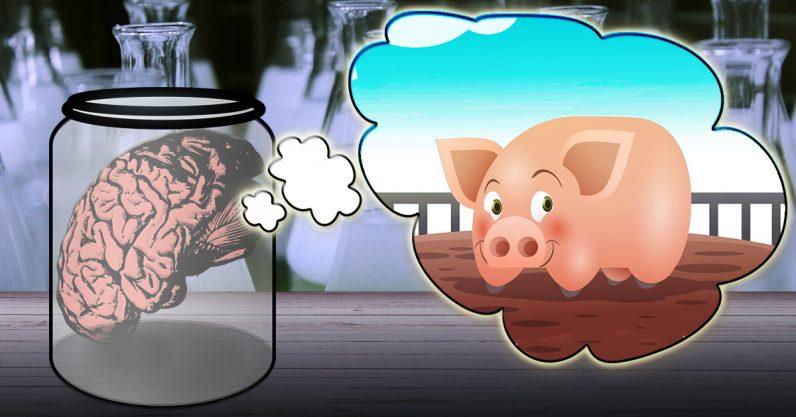 A team of scientists recently revealed they’d successfully conducted experiments on hundreds of pigs that involved keeping their brains alive for up to 36 hours after the animals had been decapitated.

Maybe Sergio Canavero, the mad scientist who wants to perform a brain transplant on a human, isn’t so crazy after all.

Researcher Nenad Sestan, who lead the team of Yale University scientists, disclosed the nature of the research in a meeting at the National Institutes of Health last month to discuss the ethical concerns surrounding edge research with the human brain. In essence they were able to successfully remove the pigs’ heads and resuscitate their brains while no longer connected to a body.

Through a delicate, complex process they were able to keep the brains alive by connecting them to a closed-loop system called “BrainEX” that pumps oxygen-rich artificial blood through the necessary areas of the brain to sustain life.

The researchers intent, reportedly, is to create a complete atlas of the connections between human brain cells, a monumental undertaking that’s never been done. By keeping the pig brains alive, they’re able to study them in ways that will contribute to further breakthroughs. This could lead to a radical enhancement of our understanding of the human brain.

The research itself is remarkable and, if it’s as legitimate as it’s been made out to be, it could change everything. We may have to evolve the way we think about death, consciousness, souls, and what it means to be a human – just not yet.

According to a report from MIT’s Antonio Regaldo in Technology Review :

Sestan told the NIH it is conceivable that the brains could be kept alive indefinitely and that steps could be attempted to restore awareness. He said his team had elected not to attempt either because “this is uncharted territory.”

Can it think? The Yale team added chemicals to prevent swelling during the procedure that could possibly have inhibited consciousness. So the jury is still out on whether its possible for a brain to “think” without a body.

But according to the scientists, the pig brains they operated on were definitely not living or thinking. “That animal brain is not aware of anything, I am very confident of that.” Sestan said, according to the MIT report.

The team did express concerns over the ethics of the situation. Before anything like this could ever make it to human trial there’s a lot of things that need to be considered.

What happens when you wake up inside of an environment of complete sensory-deprivation? If scientists determine that ‘normal’ brain activity can continue outside of the body, by EKG for example, is it a form of unlawful imprisonment to keep someone “alive” in that condition without their expressed consent?

There’s dozens of concerns that’ll need to be met before we start cutting people’s heads off to spite their bodies, but the path to immortality has to start somewhere.

Read next: Someone made Soulja Boy's old website point to a bunch of dragon dongs