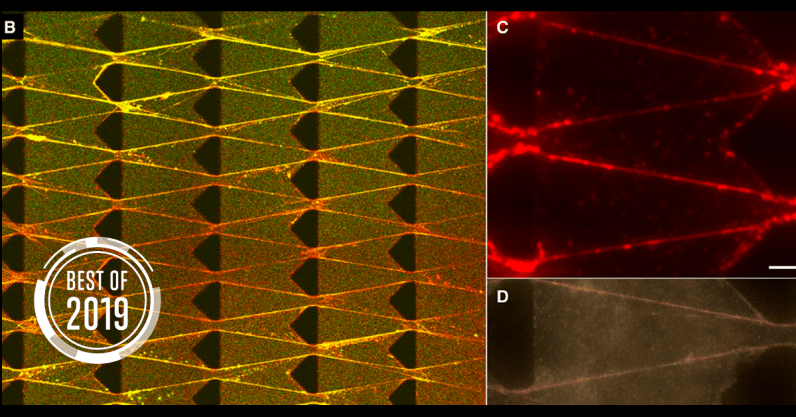 The field of robotics is going through a renaissance thanks to advances in machine learning and sensor technology. Each generation of robot is engineered with greater mechanical complexity and smarter operating software than the last. But what if, instead of painstakingly designing and engineering a robot, you could just tear open a packet of primordial soup, toss it in the microwave on high for two minutes, and then grow your own ‘lifelike’ robot?

If you’re a Cornell research team, you’d grow a bunch and make them race.

Scientists from Cornell University have successfully constructed DNA-based machines with incredibly life-like capabilities. These human-engineered organic machines are capable of locomotion, consuming resources for energy, growing and decaying, and evolving. Eventually they die.

That sure sounds a lot like life, but Dan Luo, professor of biological and environmental engineering in the College of Agriculture and Life Sciences at Cornell, who worked on the research, says otherwise. He told The Stanford Chronicle:

We are introducing a brand-new, lifelike material concept powered by its very own artificial metabolism. We are not making something that’s alive, but we are creating materials that are much more lifelike than have ever been seen before.

Just how lifelike? According to the research they’re on par with biologically complex organisms such as mold:

Here, we report a bottom-up construction of dynamic biomaterials powered by artificial metabolism, representing a combination of irreversible biosynthesis and dissipative assembly processes. An emergent locomotion behavior resembling a slime mold was programmed with this material by using an abstract design model similar to mechanical systems.

And the racing part is no joke, the paper goes on to state:

An emergent racing behavior of two locomotive bodies was achieved by expanding the program. Other applications, including pathogen detection and hybrid nanomaterials, illustrated further potential use of this material. Dynamic biomaterials powered by artificial metabolism could provide a previously unexplored route to realize “artificial” biological systems with regenerating and self-sustaining characteristics.

Basically, the Cornell team grew their own robots using a DNA-based bio-material, observed them metabolizing resources for energy, watched as they decayed and grew, and then programmed them to race against each other. We would have made them compete in a karaoke competition, but Cornell’s application is also impressive.

As unbelievable as it sounds, the team is actually just getting started. Lead author on the team’s paper, Shogo Hamada, told The Stanford Chronicle that “ultimately, the system may lead to lifelike self-reproducing machines.”

This work is still in its infancy, but the implications of organically grown, self-reproducing machines are incredible. And the debate over whether robots can be “alive” will likely have an entire new chapter to discuss soon.

For a deeper dive you can read the research paper here.

Read next: Readitfor.me boils down bestsellers in just 12 minutes