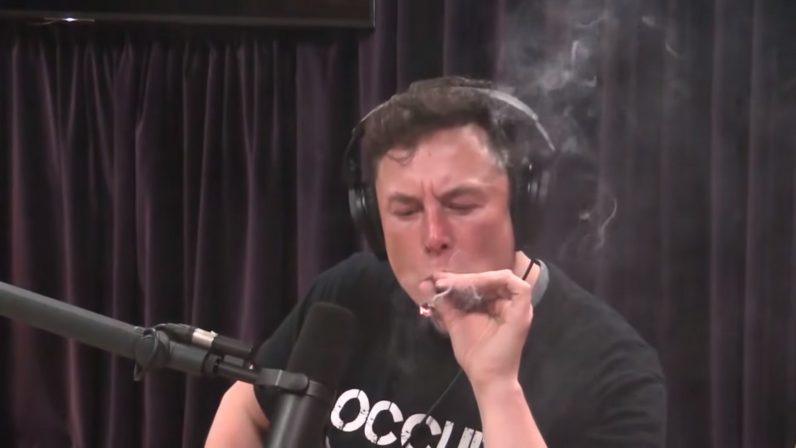 Remember when Elon Musk got high with Joe Rogan during an interview last year? It seemed like good, legal fun at the time. It turns out that toke cost US taxpayers five million dollars.

NASA Chief Jim Bridenstine initiated a safety and culture review of SpaceX the moment he found out that Elon Musk, a contractor who holds a top secret security clearance, had been filmed consuming drugs.

Per a report from The Washington Post last year:

The review was prompted by the recent behavior of SpaceX’s founder, Elon Musk, according to three officials with knowledge of the probe, after he took a hit of marijuana and sipped whiskey on a podcast streamed on the Internet. That rankled some at NASA’s highest levels and prompted the agency to take a close look at the culture of the companies, the people said.

Cannabis may be legal for adult recreational use in California, where Musk was during the interview, but it’s illegal at the federal level. In fact, the US government classifies cannabis as a Schedule I drug – just like heroin and crystal meth. This means, for all intents and purposes, Musk did the legal equivalent of shooting up heroin on live TV. That may sound stupid, and it is, but you can blame the DEA.

NASA’s response to Musk’s illegal use of “drugs” was to order a safety and culture review of SpaceX and Boeing. Musk has nothing to do with Boeing, but both companies are working on similar projects for NASA.

Politico today broke the news that NASA restructured the SpaceX contract to include an additional five million dollars worth of payments from the US government to the Musk-helmed company, for the explicit purpose of compensating it for expenses associated with the safety review.

Boeing received no such extra payment.

NASA, for its part, said it is “standard practice” for a company to receive additional money for work not included in the original contract , but did not directly respond to questions about why it didn’t offer the additional funds to Boeing.

Paying a contractor extra to do such a review does not appear to have any precedent, according to several space industry veterans.

It’s hard to swallow the idea that SpaceX‘s contract with NASA didn’t originally have a proviso for “safety” reviews.

Anyway, US taxpayers, here’s what we got for our $5 million:

Read next: Giphy debuts Arcade, a platform for making and playing 'microgames'