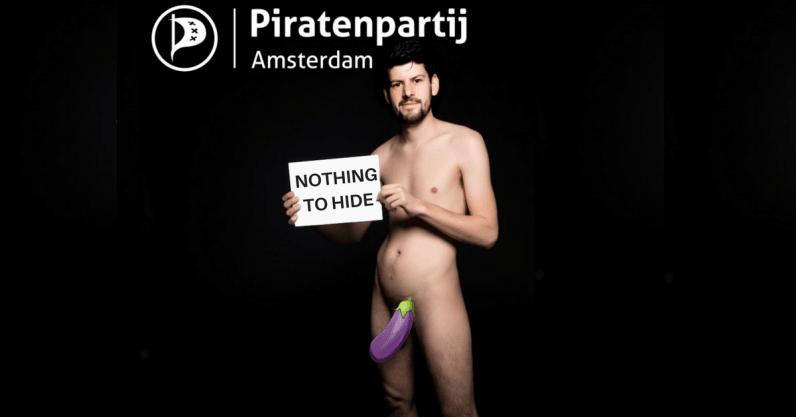 In the age of online campaigns, you’d expect political parties which specialize in tech — like the Pirate Party — to have elections in the bag by employing some digital voodoo. However, it seems that the Amsterdam Pirate Party is going with a more old school approach to grabbing voters’ attention: nudity.

According to Dutch news site FOK! the Pirate Party has hung up posters all over the city of Amsterdam featuring a naked photo of the city’s party leader, Jelle de Graaf, holding a banner saying “Nothing to hide.”

The picture — which you can find a NSFW version of here — isn’t meant to draw voters attention to de Graaf’s genitalia in the municipal elections on March 21, but rather the citizens’ right to privacy.

“Opponents of the right to privacy usually say that they don’t have anything to hide,” de Graaf told TNW in a phone interview. “But I disagree. I think everybody has something to hide, although I might have little bit less to hide after this poster.”

Alongside the municipal elections, the Dutch people will also get to vote on the controversial Sleepwet, a bill that will give intelligence agencies more options for online surveillance of citizens. De Graaf says that the posters aren’t just meant draw attention to the party’s campaign in Amsterdam, but also to oppose Sleepwet — emphasizing that everybody has something they’d like to hide — not only guilty people.

The Pirate Party is currently polling in Amsterdam at… well, nothing. In a recent poll the party wasn’t even included, which doesn’t bode well for the pirates and their stance on privacy. Four years ago, the Pirate Party was 182 votes short of a seat in the city council, perhaps this year de Graaf’s penis will save the party from being shafted.