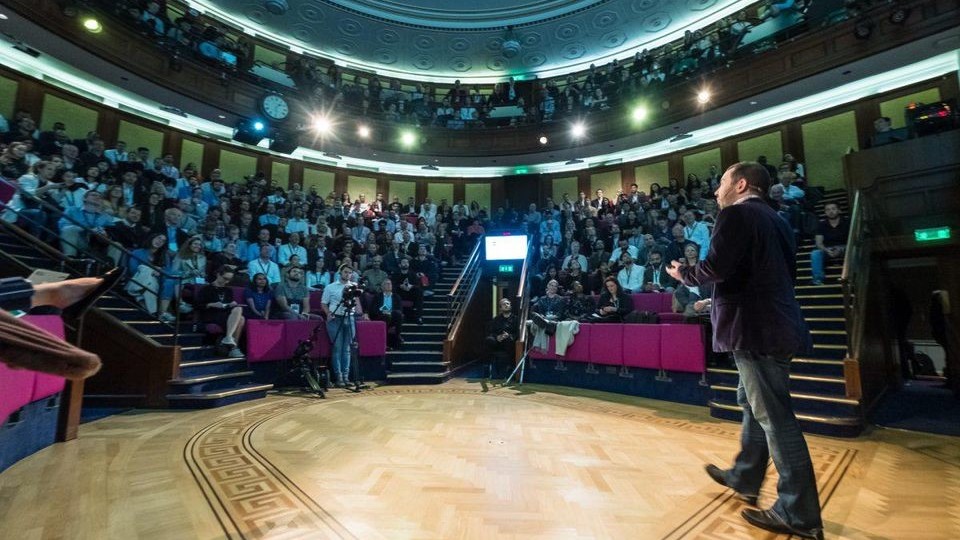 With new British Prime Minister Boris Johnson seemingly dead set on steamrolling through Brexit despite the high risk of a no-deal situation, it would be easy to assume that most foreign entrepreneurs would be giving London and the rest of the UK a wide berth until there is more clarity as to what the future holds.

However, a wander around the bustling tech hub of Shoreditch in East London reveals business as usual. There are no boarded-up accelerators, tumbleweeds rolling past WeWork, or abandoned cold brew coffee stands. On the contrary, it seems that the local tech scene is booming and as diverse as ever.

Despite the current administration’s hard line on immigration, it is important to note that foreign nationals have played a huge role in the development of the London startup ecosystem.

After all, a 2016 study revealed immigrants moving to the UK are three times more likely to be entrepreneurial than people born in Britain. With regulatory freedoms such as the FCA Sandbox, access to a bigger developer community than in Silicon Valley, and one of the most active VC networks in the world, London will continue to be a key player in the global startup ecosystem for years to come — Brexit or no Brexit.

However, due to extensive competition, and high costs of hiring and living, it is important that foreign startups launch in the right way to maximize their chances of survival. I spoke to a number of foreign founders and key ecosystem players in London to put together this startup guide for foreign entrepreneurs.

There are more than 100 co-working options in London. For newly-arrived founders, this tends to be the best way to get started in terms of securing office space and making early connections.

However, before signing any contracts, first decide which area of the city you want to live in. London is one of the biggest cities in Europe, and setting yourself up requires planning if you want to avoid hour-plus commutes.

In London, coworking spaces with multiple locations include Mindspace, LABS, Runway East, Huckletree, Workspace, and Work.Life. Later this year, The Wing, a female-focused co-working space and community hub, will also launch its first site in the city.

For startups looking for more hands-on support, TechHub offers affordable work space, in addition to support and funding to early-stage companies via its networks. More than half of its community are foreign-born founders, and the organization recently rolled out its TechHub Accelerate grant program for underrepresented groups. With a mission to improve diversity in the local tech ecosystem, the grants offer free office space, visibility, and support to foreign founders, women, people of color, the LGBT community, and veterans.

Google for Startups runs a residency program in London offering office support, mentorship and a toolkit of free digital tools for early-stage companies, and for Fintech companies Rise by Barclays is worth checking out. Aside from hosting its own accelerator program and also being home to TechStars London, the hub also has a busy calendar of events and meetups for fintech players. Rise’s community manager Tony Margiotta, known as ‘the startup whisperer’, previously worked for London & Partners and is known to be a great connector and ecosystem builder, in addition to Amrit Dhir, who heads Startup Connections for Google for Startups.

Talking of Techstars London, it would be unwise for foreign founders to overlook the established accelerator programs based in the city. With Founders Institute, SeedCamp, and corporate accelerators from Microsoft, Visa, Barclays and many more, there are loads of options – however, there is also plenty of competition for spaces on these programs. For startups wanting to split their time between London and their own home countries, StartupGrind runs a remote accelerate program which in 2019 alone has inducted 107 companies from 26 countries.

It is worth mentioning that admittance to some of these programs can help fast-track visas for founders coming from outside the EU. TechNation, an organization launched in 2011 to support the growth of tech in London, has a mandate from the Home Office to endorse a number of types of visas for startup entrepreneurs. Several accelerator programs work with TechNation to endorse candidates, by providing a letter of recommendation along with evidence they are making an investment into the company.

Eamonn Carey, Managing Director at Techstars, told me this doesn’t guarantee the visa, but it certainly can improve the likelihood it is approved due to the strict vetting systems these programs have in place.

There are also a number of foreign government-backed support organizations in London. For example, JETRO supports Japanese companies that want to expand into the UK market, Tech Italia runs an accelerator and support network for Italian companies, and PLUGin offers support to Polish entrepreneurs. The Irish government also offers a hub for incoming founders and runs programs like City Insights to connect Irish companies to the London ecosystem. Larger international companies are also active in the city’s tech ecosystem – for example, British sports and entertainment technology provider Deltatre and Microsoft worked on a project to build a ML motion detector tracking football shots in London.

Events are a great starting point for founders who have recently arrived in the city. At least in the first couple of months founders should try to attend multiple events like New Tech Meetup each week to extend their networks and start getting the lay of the land in terms of who to speak to and where to spend their time.

Some good resources to get started are Startup Digest, Tech.London from the Mayor’s office, as well as Eventbrite and Meetup. It is worth signing up to newsletters from leading accelerators too.

A number of large scale general tech/startups events take place in the city throughout the year, such as LondonTechWeek, Unbound, Startup Grind Europe, or Tech. Festival. However, it is worth checking who the sponsors and speakers are for these events to see if it’s worthwhile, given the price point.

With so many events and meetups taking place founders will find that they need to start being more selective or end up burning through time and resources. To make connections that drive business growth, niche groups linked to a startup’s vertical is the best approach. Targeting demographics relevant to founders such as female entrepreneur support networks, groups based on nationality, or groups like the YSYS Meetup. Anna Tsyupko, CEO of Paybase, recommends signing up to the ICE list and checking out invite-only groups and communities, such as Sharing Economy UK, The Entrepreneurs Network or Fintech Circle.

With four of the top 10 universities in the world (University of Oxford, University of Cambridge, UCL, and Imperial College London) in or very close to London, the city offers a wealth of highly skilled talent. However, hiring is also very competitive in London, and more expensive than other European hubs.

As mentioned before, a number of local colleges run entrepreneurship and accelerator programs. The K-20 Accelerator at King’s College is particularly esteemed. Getting involved with these programs gives entrepreneurs access to engaged interns working for university credits who could turn into future employees. Universities in the city are increasingly partnering with tech companies, for example with University College London working on an initiative with Great Ormond Street Hospital and Microsoft to improve care for children with Cystic fibrosis.

Platforms like WorkInStartups, Gradbay, and AngelList are useful for scoping out talent. But Dina Bayasanova, CEO at PitchMe, warns that foreign founders should always do their own due diligence rather than blindly hiring based on ratings or recommendations. Multiple founders have mentioned to me that while interview skills are on point in London, they have often found that applicants will up-sell themselves to improve their chances.

Also, rather than just paying the London premium for the sake of it, spreading a wider net across the whole of the UK. As far north as Dundee in Scotland, there are respected university accelerator programs like the Dundee Centre for Entrepreneurship offering more affordable, and attainable talent, from locations just an hour’s flight away.

For startups looking for entry-level developer talent, there are many coding boot camps in the city such as Le Wagon, General Assembly, Flatiron School, Product School, Founders and Coders, along with more specialized schools like Data Science Dojo. But just remember, there are coding boot camps dotted all over the UK too.

The UK government and the City of London local authorities have been making a major push to establish London as the European Tech Hub for the last decade, and really ramped up promotion around the London Olympic games in 2012.

There are a number of public organizations that can help out foreign founders with soft-launching in the city. The Global Entrepreneurship Program by the Department of International Trade is very supportive in connecting important ecosystem players and investors. It has helped 340 businesses relocate to the UK and raised over £1 billion of private investment for companies.

London & Partners, the mayor of London’s promotional agency, is also available to help founders soft landing, R&D tax credits are available from the UK government and programs like InnovateUK offer grants of as much as £700K plus without taking equity.

Andrew Tibbitts, COO of TechHub, argues that startups in London have the unique opportunity of being able to directly influence policy via COADEC, the body which represents the startup community to government. Tibbitts notes that being in the same city as policymakers means startups who are looking to explore in terms of licensing or regulatory changes can generally make connections with people with real influence, even if they are not UK citizens.

In terms of regulations, the UK government has been quite forward-thinking especially in terms of financial regulations. The FCA regulatory sandbox allows businesses to test innovative propositions in the market, with real consumers, making London a hotspot for high growth fintech startups from all over the world. After all, all of the fintech unicorn founders in London to date have been foreign.

However, getting your slice of the funding pie requires a lot of work. One founder told me that she went to upwards of 80 first meetings before securing her seed round.

Like other crowded ecosystems like Silicon Valley, being able to show traction in home markets and recognition from global organizations definitely helps. Across the board, founders told me introductions and pitches to London investors need to be well researched and highly personalized.

Warm introductions are essential in the London ecosystem. If a foreign founder is lacking the warm introductions they need, it would be worth checking out investor conference NOAH, demo-days from leading accelerators, or investment sessions at organizations like TechHub, where you know investors will be spending time.

Londoners may have a reputation for being hard-nosed, and you are certainly unlikely to make many new friends on the tube at rush hour. Nonetheless, all of the foreign founders I spoke with consider ‘the Big Smoke’ to have a welcoming startup ecosystem, bolstered by a startup-friendly government and local authorities. However, one can only hope that regardless of what happens, the UK government will establish immigration laws for skilled workers which continue to allow startups to flourish with the international talent which has played such an important role in the development of the ecosystem to this point.

The prospect of the UK crashing out of the EU with no deal will undoubtedly make British and foreign investors, founders, and talent skittish. Regardless of the hardships to come, there is unlikely to be a tech exodus out of the UK. Brexit or no Brexit, one can only hope that foreign entrepreneurs will continue to play a key role in British society, culture and economy, as they have done for the last century.