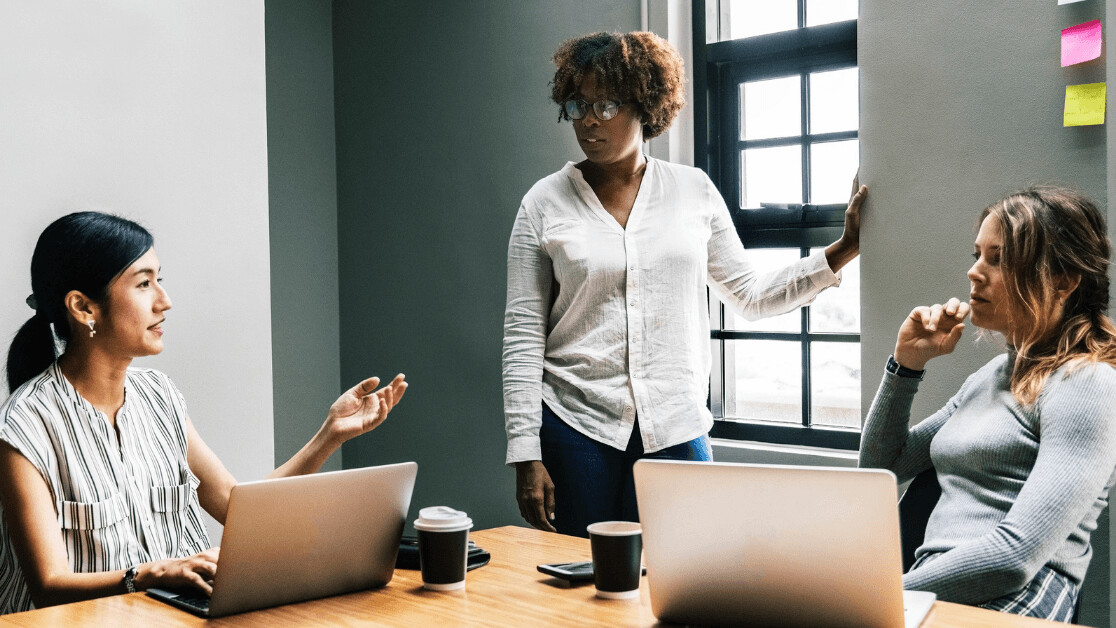 It’s recently been confirmed that female-led startup companies get just 10 percent of venture capital investment. And according to the report, it’s not just female leadership that puts investors off, it’s the mere presence of a woman — the report states that having a woman on the pitch team means you will get just a tenth of funding compared to those without.

The reality, of course, is far more complex. The report makes clear that the proportion of female-led startups that received investment (4 percent) was roughly the same as those who asked for it (5 percent), so we need to look deeper into why women are not doing so. Why are there so few female led startups and scaleups? The problem, the findings suggest, is not that women are being overlooked for investment — it’s that not enough women are coming forward with their ideas.

And when we do, it seems we tend to do rather well. The report found that in three of the ten industries studied, all-female teams actually outperformed all-men, and by a considerable distance in areas like consumer goods and recreation.

What’s more, a separate study found that while female founders get less funding than males, they make double the revenue.

The report was completed in conjunction with Diversity VC, a non-profit dedicated to freeing venture capital from bias. Diversity VC takes an ‘intersectional’ approach to bias — meaning females have it bad, but white females not so much, and able-bodied, white, cisgender females even less.

You get the point — Diversity VC thinks that what matters to investors is not so much your idea, but how much your identity conforms to the ‘default’ (their word) identities of society.

As a female, non-white Founder and CEO of a company developing artificial intelligence and blockchain technologies to improve education, I could be seen through this mindset as one who broke through the mould. But I have never stopped to think about my gender or skin color before walking into a funding pitch and I have never felt I missed out on a deal because of either.

The obsession with attributing failure and success to immutable characteristics risks sending a dangerous message. In a time when we should be teaching our children that they can achieve whatever they set their mind to, we are doing the exact opposite — that your success will be determined by your biology.

Raising girls to be comfortable with failure

The most solvable issue holding women back is how we raise girls to be overly-reluctant to pursue risky ventures. Girls learn from an early age to take fewer risks — partly through biological, maternal instincts, but too much of it unnecessarily reinforced by our parents and peers. Research shows mothers are far more protective of girls than boys in playground environments, cautioning them against risky behavior more, while even encouraging boys to take risks.

Research also found that women are more hesitant when crossing a busy road, while men arrive at bus stops later than women in order to minimize waiting time. Not only are girls encouraged to take fewer risks, but studies show that in stressful situations women take fewer risks, while men take more. And with financial risk-taking being long-associated with testosterone levels, girls may be hard-wired to take fewer risks. At least in theory, it is no surprise we are less present in funding pitches.

But in reality we both over and underestimate our influence on children, with both sides of the politico-psychological divide getting it wrong. The blank slatists of the left claim that we are all products of our environment — a narrow path that leads to the dead end of believing that intersectional prejudice is to blame for a lack of female investment.

Equally, the right’s view that we are biologically determined falters when confronted with the evidence. The reality is more complex, but research suggests you can ‘fake it til you make it’ with risk-taking, while parents can positively encourage children towards developing certain personality traits.

Intentionally setting yourself up to fail

If girls are taught that failure is to be feared, then it should be no surprise that so few of them go into business. We should be harnessing the power of failure, a position Cristal Glangchai’s enterprise school VentureLab embraces. It intentionally creates scenarios that set students up to fail, acclimatizing them to hardship but also teaching them how to pick themselves up and improve.

To be clear, I am fully-conscious of the real pressures women face, especially in the often predatory world of investment. Sexual harassment is real, as is the stereotype of the ‘handsy’ old, male investor. It is also vital that we calculate the gender breakdown of investments, if only to understand society further. But the categorization should not be confused as the reason and the cause of the problem.

If we want more women to lead successful businesses, we should ignore the pushers of prejudice and raise our girls to be comfortable with failure.