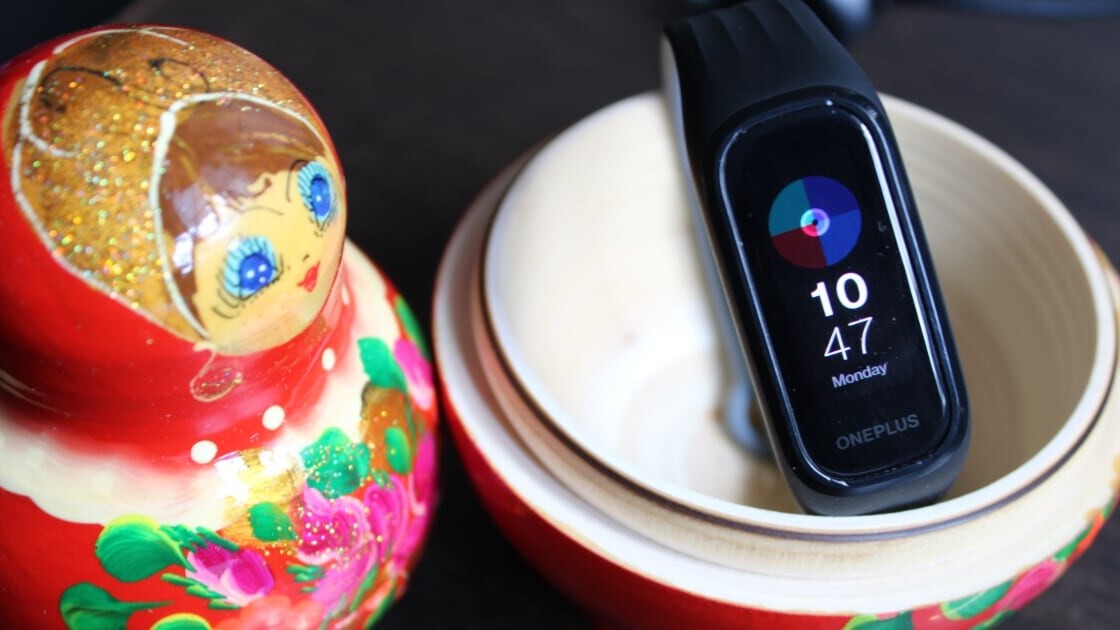 All major Chinese phone manufacturers have an accompanying fitness band or smartwatch to their name. Xiaomi and Huawei have been producing these gadgets for years now.

Other firms such as Vivo, Oppo, and Realme have joined in the last few years. So, why do OnePlus have to feel like the guy in the “They Don’t Know” meme?

The company has finally launched its first wearable, the OnePlus Band, in India at a price of ₹2,499 ($34). A rather basic affair, it falls under the same category and budget range as the Mi Band 5.

I’ve been using this band for more than a week, and while it’s a promising product, it has some first-version jitters.

At first look, the OnePlus Band looks like a cousin of FitBit Charge. It has a square fob with a 1.1-inch AMOLED display and a silicone rubber band with liner markings.

The band comes with an optical heart rate sensor and 3-axis accelerometer and gyroscope to track your movements. Plus, there’s an optical blood oxygen sensor to measure your SPO2 levels and track sleep. However, this is not a medically certified measure, so don’t use it for precise reading of this parameter.

There are 13 workout modes including running, walking, outdoor cycling, yoga, and cricket — and you’ll have to launch them manually. OnePlus‘ app concentrates on four key stats for your daily health tracking: step count, calories burnt, workout minutes, and activity sessions. The company counts walking at 100 steps per minute as a workout even if you’re not in the workout mode. The app counts an activity session when you move a certain unspecified distance in an hour — something akin to Apple Watch’s Stand activity.

You can connect the band to any phone running Android 6.0 and above with the new OnePlus Health app. The company said that iOS support is coming soon.

The band can pretty much do everything you expect a basic fitness device to do: mirror your notifications, control the music, and provide a remote camera button.

OnePlus claims that the band will last you 14 days on a single charge. To charge it again, you have to pluck out the fob out of the band and stick it to its wired cradle. The band has an IP68 rating so you can safely wear it for swims and in the shower.

On paper, everything looks set for the OnePlus band to grab a good chunk of the market upon its debut. However, the device suffers from some questionable design choices.

First, there’s the charger. There’s nothing wrong with the cradle per se, but other manufacturers have come around and made it possible to charge the device without removing it from the band.

Now, this wouldn’t be so much of an inconvenience if I were charging the battery every two weeks. But I had to put it on charge within a week — less than half of the advertised time.

The band doesn’t have an ambient light sensor, so at default brightness, it’s hard to read stats outside the house.

Also, when you tap on a watch face, it doesn’t take you to a respective screen — for example, your activity stats. Instead, it shows you the status of the connection and battery percentage. An odd UI choice.

If you’re syncing your notifications with your phone, you’ll have to swat every notification out even if you have already deleted some of them. And, you can’t really take any action on them.

It’s not all bad news for the OnePlus’ debut fitness product though. It does basic fitness tracking well, and if you’re starting your fitness journey, it’ll motivate you to complete your steps and calory burning goals. I used it to track my daily workout (have to classify it under freestyle), and walks and runs outside and basic stats were captured well. If you are using the band for runs, you’ll have to take your phone along to use its GPS for greater accuracy.

The band doesn’t aggressively track calories you burn if you are moving around the house or resting. Keep that in mind while setting your goals on the device.

The OnePlus Band is lightweight and comfortable to wear, and I have taken it off only once or twice in the past week or so. I usually take off fitness bands while sleeping, but while using this device, I didn’t even notice that I was wearing it.

I try and make sure I get enough sleep without any device to nag me about it; as such, I don’t rely much on sleep tracking features. From my basic observations, I found the OnePlus band notes your sleep time pretty accurately. Just don’t expect it to track your sleep cycles precisely down to the minute.

Should you buy the OnePlus Band?

The OnePlus Band has feature-parity with other fitness wearables in the same price range such as the Mi Band 5 and the Samsung Galaxy Fit e. However, some software design flaws and bugs thwart it from being an overall winner.

The band also doesn’t reach anywhere near its advertised battery life on a single charge. Plus, it doesn’t offer any other visible advantages over other fitness bands.

The OnePlus Band could be a good option for you if the company fixes some of the issues with firmware updates, and offer a deal when someone’s buying a new OnePlus phone.

The OnePlus Band is therefore a decent performer, but it’s hard to recommend given the competition. For your basic fitness tracking needs, opt for the Mi Band 5, which has longer battery life at a similar price.