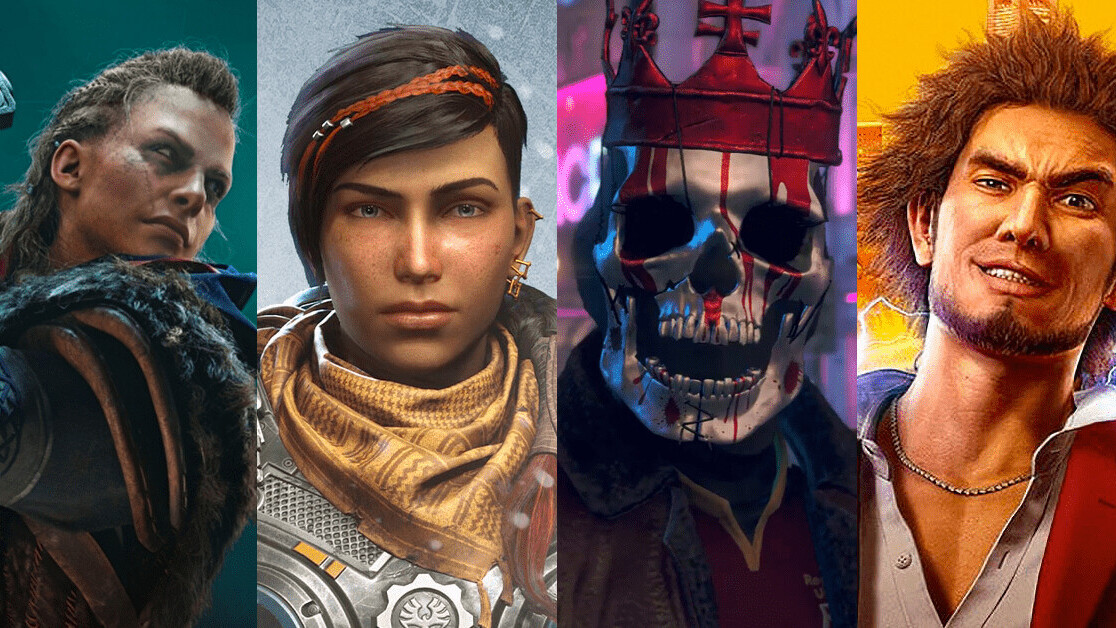 It’s the biggest week in years for gamers across the globe, as both Microsoft and Sony are releasing their next generation of consoles. A console is only as good as the games that are available on it, so here are (almost) all the Xbox Series S and X games rounded up.

At the launch of the previous generation devices, the PlayStation 4 dominated the Xbox One in terms of horse power. You’d often see games running in lower resolutions, or at worse framerates, on the Microsoft console. The power difference was corrected with the launch of the Xbox One X back in 2017. Microsoft proudly proclaimed that the One X was the most powerful console on the market, and games did indeed run a lot better on the One X compared to its competition.

This generation, Microsoft is coming out of the gates with a split approach.

On the low end, it’s launching the Xbox Series S (pictured on the left), a $299 console made for 1080p screens. We haven’t gotten our hands on the Series S yet, but it looks cute and seems to do what it says on the tin. Be wary of the smaller HDD though, it only has 362GB of storage available, which could become a problem down the line.

The storage space is expandable but it’ll come at a price, as all these new consoles rely on expensive NVMe SSD hard drives. These are amazing for load times, but a 1TB upgrade will set you back $220, which is more than the price difference between the Series S and the Series X.

On the high-end, there’s the $599 Xbox Series X. A fat little tower that is eight times more powerful than the Xbox One X according to Microsoft. We’ve had our hands on the final hardware for a couple of weeks now and you can read Rachel’s full review here, but the tl;dr is that this console is an absolute beast. Like the PS5, it packs a one terabyte hard drive, that should have enough space for most consumers.

Unfortunately, there are not a lot of games available at launch for these new Xbox consoles. It’s all ports of games that are available on the old consoles, running at higher resolution and with higher graphical fidelity. That doesn’t mean there’s nothing to play on them though, here’s the full list of everything we’ve been playing so far:

Rachel: This year-old game proves to be a treat on the new Xbox, with stunning visuals and gorgeous character models. I loved this game because it finally made Kait the main character she was always intended to be, but I’m not a fan of its attempt to be more open-world. You can read my full review here.

Compared even with the PC release, the Series X version of the game has so much more visual bloom. It’s locked at 60FPS, which makes the combat feel even more snappy. This feels like the version of the game we were meant to play, and I’m almost sorry it wasn’t saved as a launch game for the next-gen release.

Rachel: Out of all the games on here, few radiate joy and character as much as the latest entry in the Yakuza franchise. Departing a little from the series tradition, Like a Dragon is an RPG starring new protagonist Ichiban and a cadre of colorful companions. It’s an easy point of entry even if you’re not a series fan.

The next-gen offering gives you the option of playing in different modes for high framerates, high resolution, or an in-between “normal” mode that compromises on both. Personally, I prefer the compromise as it keeps things at a steady 60 FPS, which looks great with the RPG action.

Nino: I can not stop playing or thinking about this game. Read my review if you want to get the full story, but the gist is that it’s a more streamlined, cohesive experience that’s probably my favorite entries in the series.

Valhalla already looked great on PS4 Pro, but it looks even sharper on the Xbox Series X and playing it at twice the framerate makes me never want to go back. It doesn’t have any fancy ray tracing features we’ve seen in Ubisoft’s other open world launch title, but I’ll take a high framerate over fancy reflections in this case.

Nino: Assassin’s Creed Valhalla isn’t the only open world game that Ubisoft has ready for the next generation of consoles, Watch Dogs Legion is also upgraded for the new Xboxes and the PlayStation 5 at their respective launches.

Watch Dogs Legion didn’t blow me away (read my full review here), but the next-gen upgrades are cool. The lower resolution and bad texture filtering on the PS4 Pro made the game a bit hard to navigate, which isn’t a problem in the next-gen versions.

The biggest upgrade in the next-gen versions of Watch Dogs Legion is the addition of ray traced reflections. The London environment is filled with puddles and other reflective surfaces, so it’s a great showcase piece for this new reflection tech. It unfortunately also means that the game’s framerate is locked at 30FPS.

Rachel: I haven’t had the chance to play this game on a previous-generation console, so all I can say is that it’s absolutely stunning on a next-gen console. I can think of few genres that benefit more from higher FPS and resolution than racing. The new graphics mean better weather, sharper environments, and dynamic effects. If you want a game that feels like a real test of what the Series X can do, you might want to give Dirt 5 a try.

Nino: My favorite racing game of the last generation got even better on the Series X, though it’s not a huge upgrade.

According to its developer, the Xbox Series X patch for Forza Horizon 4 also boosts the shadow, reflection, and particle effects quality, but those differences are so minor that they’re hard to distinguish. But that’s ok, Forza Horizon 4 was already a stunning game on the previous generation of consoles and seeing it run in native 4K at 60FPS is a treat.

Rachel: Few games of this generation or the last exude sexy, gothic energy with as much abandon as Devil May Cry V. I was in love practically from the moment I booted it up, and the game only got better from that point on. You can read my full review here.

The great thing about action games like this is that they’re usually always locked at high frame rates — and if they aren’t, they should be. The game gives you the ability to turn ray tracing and 120FPS mode on (though not at the same time) if you choose. It’s nice to have the option. Also, you get to play as Vergil — and that’s awesome!

Nino: It’s safe to assume that every popular free-to-play game from the old consoles is going to receive an update to take advantages of the new ones sooner or later. Fortnite has already been patched and it looks great.

The graphical improvements aren’t going to set the world on fire, but Fortnite looks and runs great on Xbox Series X. The game now runs in 4K (it ran in 1728p on the One X), has faster load times thanks to the new SSD and the split screen mode now also runs in 60FPS.

The physics engine also received an upgrade. Grass and trees now respond to explosions, and fluids like smoke and water look more realistic on the Xbox Series X.

Rachel: Hey, remember when No Man’s Sky was kind of an alternate word for “fundamentally undercooked game released ahead of schedule”? It’s taken years, but NMS is finally the game it’s always meant to be. Not only is it visually spectacular, you can now play with up to 31 other players.

What was originally a rather lonely experience can now involve a full-blown community, with the ability to build bases and colonies together. The new visuals and fast loading times supported by the Series X’s SSD definitely give the game the upgrade it’s always longed for.

Nino: The Falconeer is a neat indie game about aerial dog fights with huge falcons. Think Ace Combat, but in a fantasy setting. It’s a cool concept – we don’t see a lot of narrative-driven flight ‘simulators’ – but I found the controls and the structure to be a bit frustrating. It would’ve been a perfect game for Game Pass, but at $29.99 I find it tough to recommend. Unless you’re desperate for some aerial combat of course.

It runs well on Xbox Series X with a ‘minimum‘ resolution of 4K and support for both 60FPS and 120FPS. It’s still an indie game made by a small studio, so don’t expect Pixar-level graphics, but it’s not unpleasant to look at.

Rachel: Gears Tactics is a turn-based strategy game that marries XCOM-style gameplay with a uniquely Gears-flavored campaign — and if you like either one of those things, you’ll like what Tactics has to offer. It also comes with an excellent story campaign that features some new faces (and at least one familiar one).

The biggest benefit you’re likely to get from going next-gen with this game is the speedy load times and 60FPS. It won’t makes as big a difference as it makes in, say, Gears 5 (see above), but it’s still nice to look at nevertheless.

Nino: I absolutely, unconditionally LOVE Tetris Effect. I loved it when it came out in 2018 (review here) and I still love it just as much two years later. Tetris is one of the best game concepts ever conceived and it blends phenomenally well with Rez and Lumines creator Tetsuya Mizuguchi’s acid-laden audiovisual style.

Previously a PlayStation 4 exclusive, Tetris Effect now launched on the new (and old) Xboxes in the form of Tetris Effect: Connected. As the title implies, this version adds (online and local) multiplayer to the mix. Tetris Effect was already a great party game, so the addition of local multiplayer is more than welcome.

Ori and the Will of the Wisps

Rachel: Nino will probably fight me on this, but I think the glowing jewel that is Ori is the prettiest game available on either console. A delightful platformer, it’s a great expansion on the rather simplistic original, adding such amazing things as weapons and actual characters other than Ori themselves. You can read my thoughts on why characters make the game better here.

If you played this game on a decent PC or an Xbox One X, you might not see a huge improvement — it’s not like this game has ray-tracing or realistic graphics. But if you haven’t yet experienced this game at 60fps, you’re doing yourself a disservice. Also, the pretty environments look spectacular on a 4K TV.

Nino: Mortal Kombat 11 got a free upgrade for next-gen consoles that improves load times and resolution. I had to squint to see the difference between the old and new versions, but that’s more of a testament to the game’s already stellar visuals.

Another neat addition in MK11’s next-gen offering is the ability to play against people who are still on the previous generation of consoles. On the Xbox version your progress also carries over, so you have no reason not to install the free patch.

Some titles – like Control, and FIFA 21 – are set to receive their next-gen patches in the coming weeks. We’ll be sure to update this article as we get our hands on these.