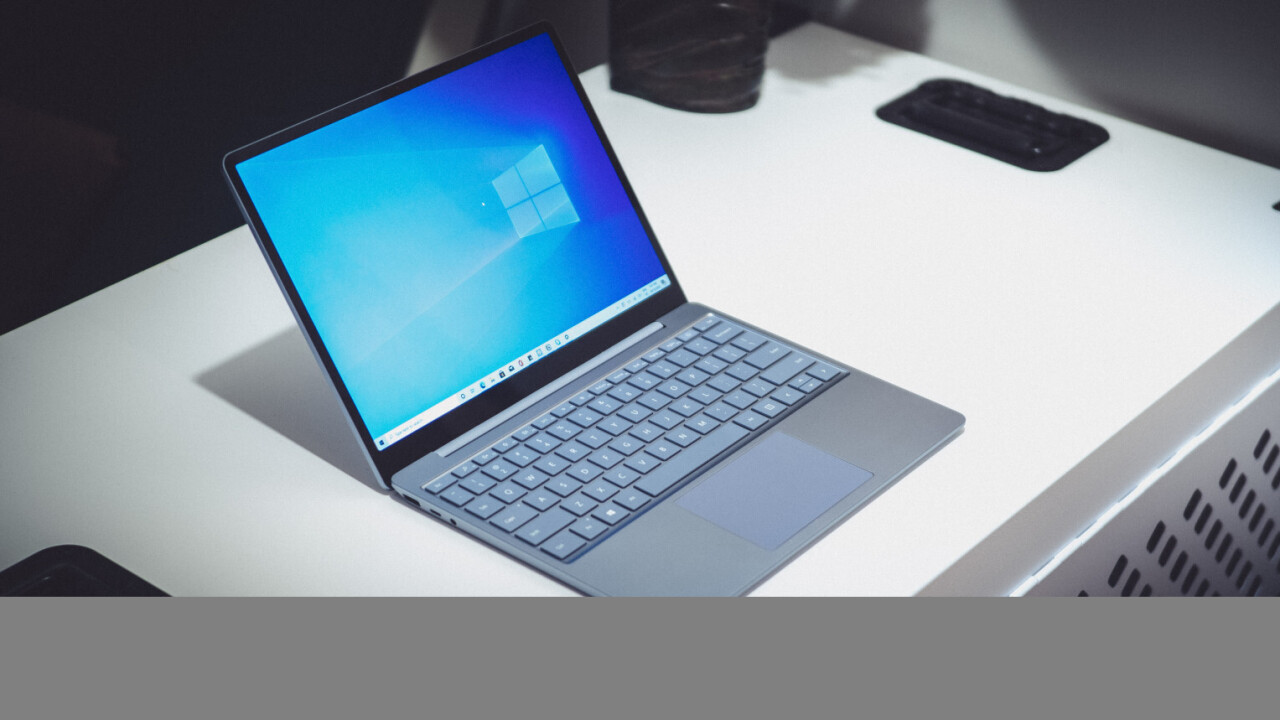 There’s not much you need to know about the Surface Laptop Go, Microsoft’s new entry-level device, that I can’t summarize in a bullet list. I’ve been using it for the past week, and I love this little thing for a variety of reasons:

Let’s talk about those compromises then, as they might be what make or break this laptop for you. To me, there is just one thing that keeps the Surface Laptop from being a no-brainer recommendation: the 3:2 display has a resolution of just 1,536 x 1024. I can’t remember the last time I used a laptop with resolution lower than 1080p, much less from the Surface family.

So you’ll first have to decide whether you can deal with a less than ‘Retina-quality’ display. But if you can get over the resolution, it’s not really a bad screen.

The 148 pixels-per-inch sharpness is not so far behind the norm for the price. There are plenty of 13-inch 1080p-ish laptops on the market, and those are only a little bit sharper, at about 165 ppi. The Laptop Go’s sharpness is basically equivalent to a 1080p display on a 15-inch display. More importantly, the Laptop Go’s colors are accurate and decently saturated. Its contrast is good, and it gets bright enough for outdoor use. There’s no uneven backlighting, yucky IPS glow, or annoying tint.

It won’t win any awards, but the Surface Go’s display is still better than what I normally see in this price class. The display also features narrow bezels and rounded corners, which give the Laptop Go a more modern look than either the Surface Laptop 3 or Surface Book.

It’s also still a touchscreen, although that brings me to compromise #2: there’s no pen support. That makes me sad as a long time Surface stan, and weakens it a bit as a proposition for students. Granted, it’s not a 2-in-1, so you probably wouldn’t be doing much doodling anyway, but I wish I could use the pen for annotations and the like. If you prioritize the display over CPU performance, you should consider the Surface Go 2 instead. That one has a 1920 x 1280 display and full pen support.

Compromise #3 is the fact that the keyboard has no backlighting. That was a surprise, as it’s not something you’d think would be particularly cost-prohibitive, and it can be a little irksome if you’re typing late at night.

And lastly, compromise #4 is the fact that the $549 configuration has just 4GB of RAM and 64GB of slow eMMC storage. This is clearly intended to be the cloud-first configuration, and there’s no microSD slot for semi-permanent storage expansion like on the Surface Go.

And… that’s it. Once I got over the initial shock of the resolution, there were no bad surprises — everything else about the Surface Laptop Go was a joy to use.

Aside from what I’ve already mentioned, the built-in fingerprint reader works swiftly, the speakers are surprisingly good for the category, the 720p camera isn’t godawful, and the dual microphones are nice and clear.

I might care more about the lack of keyboard backlighting if it didn’t feel so darn good to type on. It has a satisfying 1.3mm of travel and nary a sign of keyboard flex. It’s as good as the keyboard on any Surface Laptop, which is to say it’s among the best in the market.

Performance from the Core i5 processor is what you’d expect: solid for everyday tasks. Photoshop and Lightroom run smoothly, and web-browsing with my usual cavalcade of tabs didn’t slow it to a crawl (granted, I do use Edge, which is better at RAM management than Chrome). I also tried connecting it to my 4K monitor, and it handled my typical workloads with surprising aplomb. The best I can say about the Surface Laptop Go is that I normally work on a Surface Book 3 and a desktop, and I did not miss them for the week I’ve switched over.

The last part of the equation is battery life, which was similarly solid. Microsoft claims 13-hours of real-world use, and while I couldn’t quite reach those heights, an 8-hour workday was realistic so long as I didn’t keep brightness on max.

I got what I wanted from my time with the Surface Laptop Go: A good laptop that barely betrayed its sub-$1000 nature. The fact that you can have a laptop this fancy for $549 is pretty awesome. And even if I recommend you upgrade one tier, I do think 4/64GB setups are totally usable, especially paired with a decent processor.

I’m sure some readers will exclaim: “you can get better specs for less money from _____!”

Yes, you can. The HP Envy x360 and Asus ZenBook 13 are great alternatives that offer a bit more value in the $900-ish price bracket, for instance. You can also buy a used laptop and get even more bang for your buck. Stretch the comparison and you probably pick up a used desktop from Craigslist for even more performance.

But that’s missing the point of this device: the Surface Laptop Go is a nice cheap laptop. A really nice one. Frankly, I prefer its design and size to the more expensive Surface Laptop 3.

It’s a product I’d be genuinely happy to own on its own merit – not just because I couldn’t afford a more expensive option. It’s one I’d be happy to recommend to friends and family who don’t care about specs and simply want something that feels good to use.  I just don’t think the mainstream user — and this laptop is decidedly mainstream — cares that much about nickel and diming every specification. For many of these buyers, owning a laptop that feels good and looks good is more important.

The elephants in the room are Chromebooks, some of which do offer nice design (though not quite this nice) and even smoother performance at lower prices. But the inability to run full-fledged desktop applications makes the comparison moot for many users. I’ve tried to make Chromebooks my primary PC several times over the years, but I’ve never succeeded — there’s always something I need that’s available on Windows or Mac but not on Google’s OS.

No such worry with the Laptop Go – it’ll run anything you throw at it. It’s small, it’s light, the battery lasts, the design is stunning, and the compromises are few; for many people, that combination will outweigh the performance-per-dollar you might be able to get from competitors. If you can get over a fuzzy screen, the Laptop Go is the easiest Surface to recommend yet.