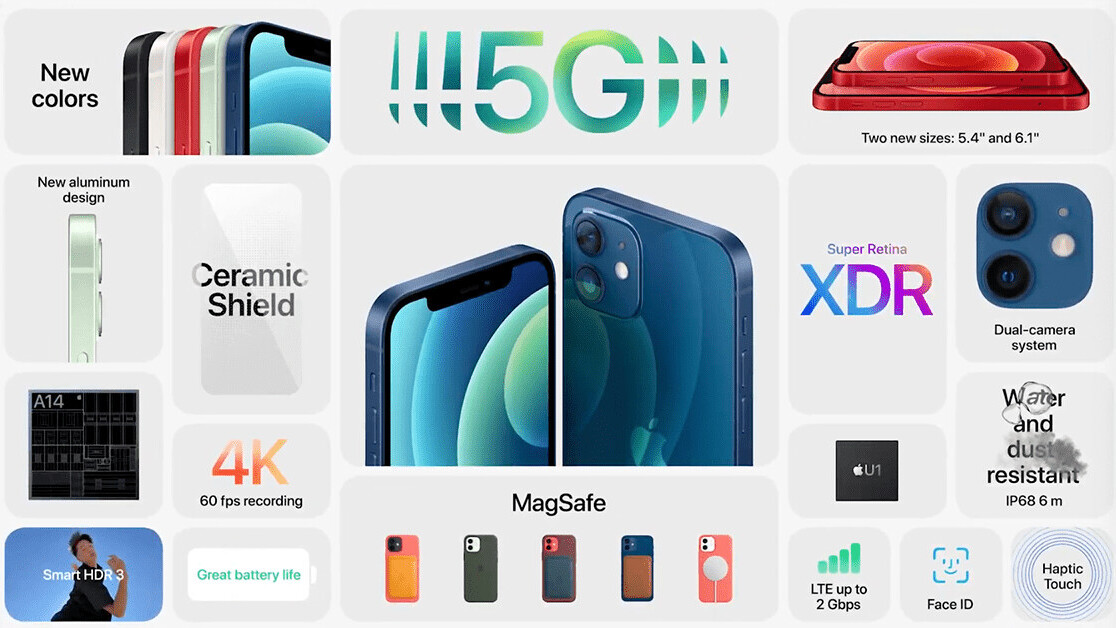 In this piece we’re going to drop all of the relevant information you need to get up to speed on the device.

This is the cool thing — the only difference between the two is that the iPhone 12 mini is teenier. Exciting, right?

God it was hard not to repeat the joke. Basically, it’s smaller than the recently released iPhone SE. Check out this helpful little diagram:

And what about the screen?

This is the meat. The iPhone 12 mini has a 5.4-inch OLED display. This is substantially bigger (and better) than the 4.7-inch LCD on the latest iPhone SE (pictured above).

It also has the same display technology as the regular iPhone 12 — what Apple calls the Super Retina XDR. This includes 1,200 nits of brightness, HDR, and Dolby Vision.

Oh, and how could I forget? The phones also come with something Apple called “ceramic shield.” Long story short, the screens should be tougher.

And what’s up with the cameras?

There are gonna be two lenses on the rear: a main 12-megapixel f/1.6 camera and a new 12MP ultra-wide.

Also — excitingly — the phone will also have night mode, a first for the standard Apple phones.

Damn right it does! According to Apple, it’s the smallest 5G-supported device around.

How about the chipset?

It has the A14 Bionic, the company’s flagship chipset.

This is meant to be the first chip in the world built on 5nm technology. It has 11.8 billion transistors, an increase of almost 40% over the previous model.

Effectively, this is going to be a fast phone.

Any other iPhone 12 mini specs or details?

Well, the base model comes with 64GB of storage (which is too little in my opinion).

It’s also going to come in five colors, just like the regular iPhone 12.

When will the 12 mini be launched?

It’ll be shipped on November 13.

The iPhone 12 mini is an interesting phone for Apple to introduce. It definitely muddles Apple’s phone collection a bit more, but does also offer people a wide range of devices to choose from.

Maybe the company aims to target people who like one-handed phones, which isn’t a bad shout. I also think the iPhone 12 could find fans amongst people with smaller hands.

Another interesting thought is that this slightly cheaper Apple device could be a good shout for teens.

Whatever goes on though, I’m happy to see Apple expanding its iPhone range, and the 12 mini is an intriguing new direction.