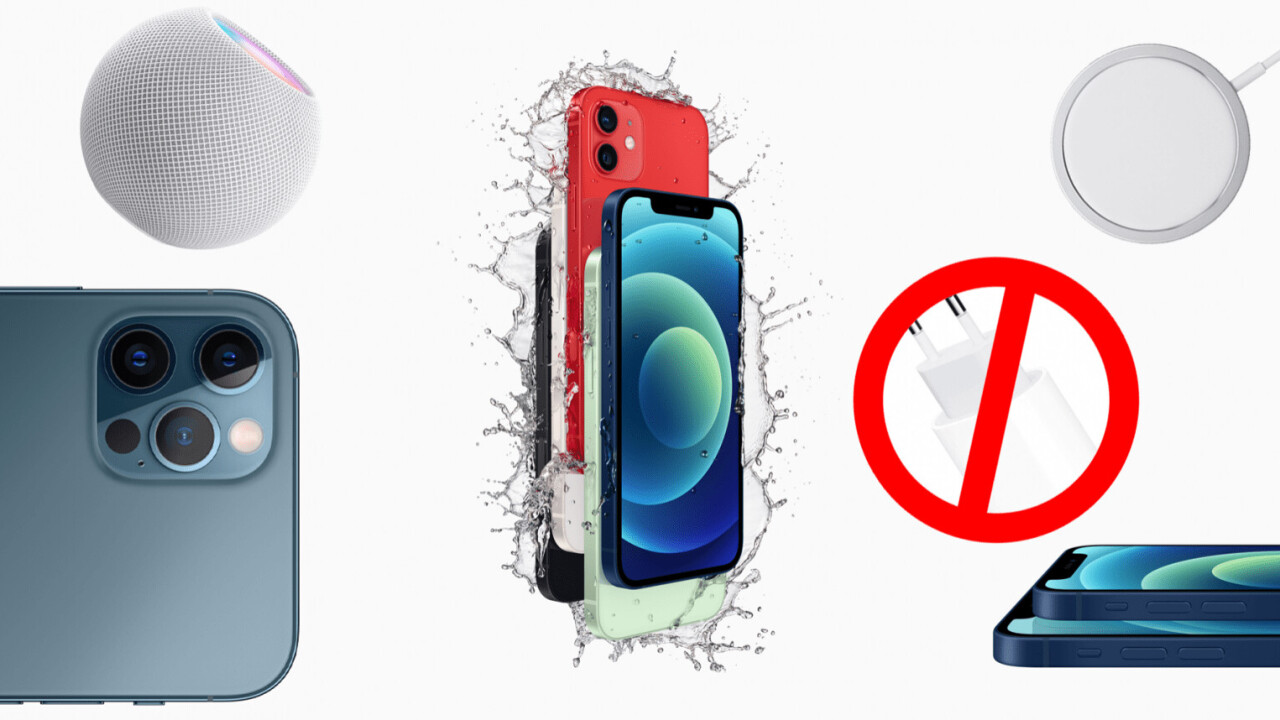 It’s been a busy few months for Apple. Fresh after releasing new iPads and Watches, the company today unveiled its iPhone 12 lineup, about a month later than usual (thanks, corona). There’s a lot to run through, so here’s everything Apple announced today in one handy list.

Apple revealed the long-awaited HomePod mini which is… a smaller version of the HomePod. Really small, at just 3-inches tall.

Apple claims that ‘computational audio’ allows the speaker to automatically tune itself to different kinds of music to provide optimal performance. It can play music in stereo automatically (assuming you buy two of them), and naturally, it supports Siri as well. Apple claims the tiny speaker has some serious sound quality, but we’ll have to see what it ends up like in person.

Other than changing the camera bump to a squircle, Apple has used roughly the same phone design since the iPhone X. The iPhone 12 refreshes that design a bit, moving away from the rounded edges and glass that characterized the old devices to a new design with flat edges — more akin to the iPad Pro and new iPad Air.

The display gets a big jump to an OLED Super Retina XDR panel compared to the old LCD, and it also essentially doubles the resolution. Perhaps more interesting is the new ‘ceramic shield’ glass — developed in partnership with Corning — which Apple claims is the biggest jump in durability ever on an iPhone.

The phones are powered by an A14 Bionic processor, as in the iPad Air, which Apple says is “the fastest chip ever in a smartphone.” That’s not a surprise, considering it’s the first chip built on a 5nm process, offering up to 50% boost in CPU and GPU performance over “the latest competing smartphone chips.”

The iPhone 12 features dual cameras with wide and ultra-wide  lenses. the wide camera gets the spec bump this year, with an F1.6 aperture that results in 27 percent more light for photos and videos. Deep Fusion and Night Mode also now work on each camera, giving you more flexibility in tough lighting situations.

Oh yeah, the phones support 5G too — assuming you have the signal.

The iPhone 12 will start at $799 and comes in blue, green, black, white, and (PRODUCT)RED colorways. It’ll be up for pre-order Friday, October 16, and will become widely available October 23.

Mini is the theme today. For the first time since the iPhone 5S, Apple has made modern a flagship phone that can rightfully be considered ‘small’ by today’s standards — the original iPhone SE notwithstanding. In fact, the iPhone 12 Mini is smaller than the current iPhone SE, which is based on the iPhone 6 design.

Despite the smaller size, it maintains essentially the same specs as the iPhone 12 — including the Super Retina Display.

The iPhone 12 Mini will start at $699 in the same colors as the iPhone 12. Pre-orders begin Friday November 6, and it will be available starting the 13th of that month.

The iPhone 12 Pro and Pro Max

The iPhone 12 Pro and Pro Max build on the features and internals of their cheaper siblings. They feature a fancy stainless steel frame in a glossier finish than the regular iPhone 12, and come in graphite, silver, gold, and pacific blue colorways. The 12 Pro gets bumped up from a 5.8-inch diagonal to 6.1 inches, while the Pro Max goes from 6.5 to 6.7 inches.

They will be available for pre-order Friday, October 16, and be available a week later on October 23. Pricing begins at $999 and $1,099 for the Pro and Pro Max, respectively.

The camera system is the real story here. The 12 Pro has essentially the same cameras as the regular iPhone 12, plus a 52mm equivalent telephoto lens for faraway subjects. A new LiDAR sensor on both phones also allows the devices to have more realistic depth and augmented reality effects thanks to accurate distance estimations. It also enables Night Mode portraits and fast low light autofocus.

The Pro Max cranks things up a notch with a 47 percent larger wide sensor with 1.7μm pixels and sensor-shift image stabilization, providing an 87-percent boost in low light performance. It also features a longer telephoto lens at 65mm-equivalent that actually deserves the name ‘telephoto.’

The new camera system and processor allow the phone to shoot not just photos with improved dynamic range, but video as well. The cameras support Dolby HDR video in 4K, 60fps, along with better video stabilization too.

But perhaps the most important feature for serious stills photographers is…

Apple will allow you to capture photos in RAW while maintaining the full processing of the A14 chip. Finally.

I’ve been waiting for someone to do this for years. Our phones are capable of impressive processing, but that’s all for naught once you want to do any kind of serious image editing in software like Adobe Lightroom. This will give photographers a ton more flexibility and creative opportunities for their mobile photography.

MagSafe is back — for the iPhone

Each iPhone 12 model has a circular array of magnets on the back, which lets you attach a wireless charger that can operate at a relatively sprightly 15W. Luckily, it still works with older Qi charging too.

Moreover, the magnets allow for a new ecosystem of accessories, such as wallets that can attach to the back without the need for an ugly case covering the entire thing.

I can see accessory-makers quickly capitalizing on this functionality.

Apple announced it plans to have a net-zero carbon impact by 2030, an aggressive goal considering the company’s massive output of hardware. Apple says it managed to do so by using recycled rare earth materials, better-sourced materials, and…

No chargers or EarPods in the box

As foreshadowed by the iPad event last month, Apple is no longer including a charger in the box — nor EarPods either. The company says its cumulative changes will allow it to save 2 million metric tons of waste annually, and have an equivalent impact of getting 450,000 cars off the road per year.

And that’s it! If you want to watch Apple’s event yourself, it’s already up on YouTube — or you can watch the embedded video below.