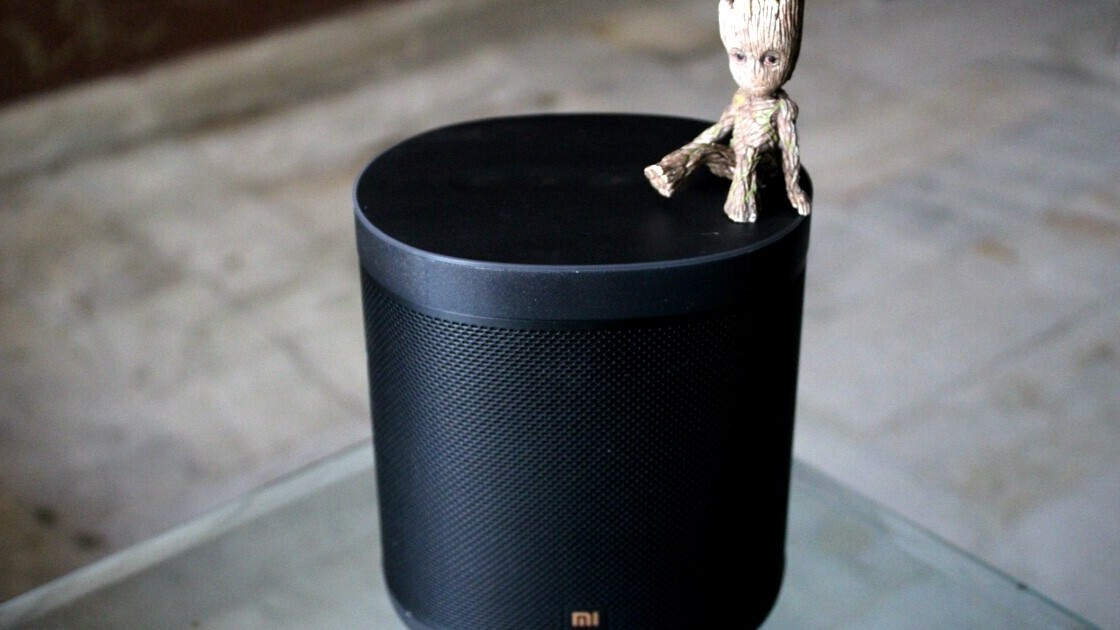 These speakers are not exactly cheap by domestic standards in India. You’d have to spend anywhere between ₹3,500 ($47.50) to ₹5,000 ($68) to get their smallest speakers — namely, the Echo Dot and the Nest Mini.

Xiaomi is aiming to take over that segment by offering better specs at an affordable price with its Mi Smart Speaker. The device is a spec-equivalent to the mid-sized Amazon Echo and Google Nest. Its introductory price is just ₹3,499($47.50), after which it’ll likely increase by a bit, but remain in this price segment.

I’ve been using the Mi Smart Speaker for more than five days, and it manages to provide you all smarts while being loud enough sound for your desk or a small room.

The Mi Smart Speaker has a semi-cylindrical design with a 0.7mm thick metal mesh surrounding the speaker. On the top, there are touch panel controls for volume, play/pause, and muting the mic.

This is not a ‘portable’ speaker per se, so you’ll need to keep it plugged in all the time. That being said, the device is not too heavy, so you could take it with you from one room to another if you’re just getting the one speaker for your home.

The ‘smartness’ of the speaker is courtesy of Google Assistant — so you can expect it to answer your questions or set your alarms and timers just as accurately and easily as any of Google‘s offerings.

What’s more, you can use the in-built Chromecast to beam audio content directly to the speaker. This allows you to pair the speaker up with your smart TV and use it as an external audio source. If you have two of these (or one other Chromecast enabled speaker), you can use them as stereo speakers.

Then there’s all your usual smart home stuff. You can easily control your lights, security cameras, smart plugs, and appliances through the speaker.

The Mi Smart Speaker has a front-firing driver. So, don’t expect the 360-degree sound experience you get from something like an Amazon Echo or a Google Nest (Home).

That driver is a 63.5 mm unit that is rated at 12W. Xiaomi claims that the device also has a Texas Instruments Hi-Fi audio processing chip to aid in sound reproduction.

For listening to commands, it has two far-field mics on either side of the touch panel. A blue “aurora” light ring surrounds the top surface, and it glows when it’s listening to your requests.

The sound tuning is exceedingly bass-heavy; you’ll be able to hear bass lines, kick drums, and other percussion instruments clearly. Vocals and instruments in higher registers are reduced to mere sidekicks, and if you step away from the speaker, you’ll instantly notice this.

I observed this with Foo Fighters’ peppy rock single Run, and I could only hear the drums when I was more than a few feet away from the speaker set up in my living room.

After this experience, I set the speaker up on my desk, and played Placebo’s The Bitter End. Once again, the vocals, guitars, and synth lines were masked by the booming drums and bass.

The speaker’s sound is more affable when you listen to pop songs such as Glass Animal’s Deja Vu and Dua Lipa’s Physical. Mind you, they still lack some of the vocal texture these songs have on offer. But a single driver can only do so much to deliver balanced sound.

There’s one visible advantage of a front-firing speaker. If you’re sitting at a slight angle from the speaker, you won’t have to yell out commands, even when it’s blasting music at full volume.

I think the Mi Smart Speaker is good enough for the desk in your study, or in a small room. It’s much better than the Google Nest Mini and the Amazon Echo dot in terms of sound quality. However, I wouldn’t necessarily use it as a speaker to pair with my TV.

Currently, Xiaomi is selling the speaker for ₹3,499 ($47.50), which is a no-brainer price for this device if you were in the market for an Echo Dot or Nest Mini.

If you don’t mind the prominent bass in its sound signature, you’ll appreciate having the Mi Smart Speaker around with its ability to get loud and offer Google Assistant features at a low price. The speaker is available for purchase on Mi.com starting today.