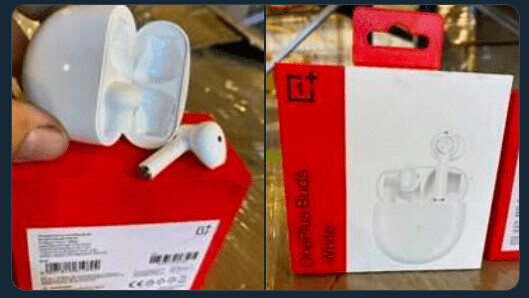 If you’re not a stickler for detail, chances are that you would mistake another company’s buds with AirPods. And the US Customs made the same mistake.

Earlier this morning, the US Customs and Border Protection (CBP) tweeted that it had seized 2,000 counterfeit Apple AirPods worth nearly $400,000 at John F. Kennedy International Airport.

However, the twist in the tale was that these were legitimate buds from OnePlus. Weird thing is that in a picture tweeted by CBP, OnePlus‘ branding is clearly visible, and no one seems to know about the company.

CBP officers at JFK Airport recently seized 2,000 counterfeit Apple AirPods from Hong Kong, valued at $398K had they been genuine.

In a statement, CBP said “CBP Officers are protecting the American public from various dangers on a daily basis. The interception of these counterfeit earbuds is a direct reflection of the vigilance and commitment to mission success by our CBP Officers daily.”

I’ve used the OnePlus Buds and while there’s some resemblance to the AirPods’ design, it doesn’t look exactly like the AirPods. Also, it might’ve helped OnePlus’ case if they had shipped their gorgeous Blue colored buds. The white-colored Buds might’ve made the Feds’ job a tad more difficult to tell them apart.

We’ve asked OnePlus for a comment, and we’ll update the story if we hear back.