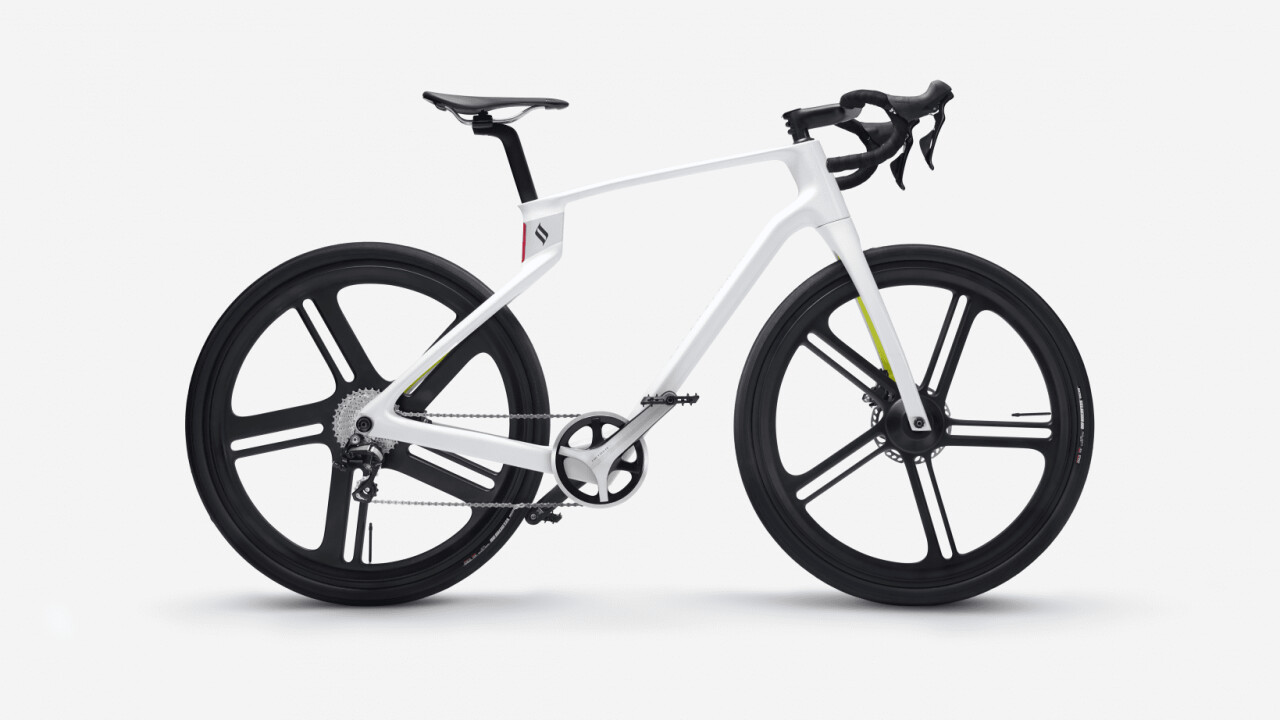 For all ebikes can do to make transportation easier and more pleasant, there’s one complaint that continues to haunt them: weight. Slowly but surely though, we’re beginning to see more ebikes approach the weights of traditional bikes using clever designs and lighter components.

An upcoming bike called the Superstrata, launching for pre-order on Indiegogo today in both regular and electrified versions, claims to push the boundaries of lightweight ebikes even further by using a 3D-printed, unibody carbon fiber manufacturing process.

Coming in at around 24.2 pounds for the electric model, dubbed the Superstrata Ion, the bike is not only lighter than practically every other ebike out there, but it also claims to be far more durable than existing carbon fiber, steel, and aluminum models. And I say ‘around’ 24.2 lb because the Superstrata has another trick up its sleeve: the 3D-printing process means each model is custom-fitted to the individual rider, allowing up to 500,000 variations of the unibody frame.

The Superstrata is made by a Silicon Valley company called Arevo, which had previously created components for the aerospace and medical industries; it’s CEO, Sonny Vu, had previously helped found Misfit, the fitness wearable company. The idea to make a bike seems to have begun first as a way to show off Arevo’s 3D-printing technology, before taking on the endeavor more seriously. The company hired Bill Stephens, a veteran bike designer whose StudioWest consultancy has created products for the likes of Giant, Cannondale, and others, to help flesh out the product.

Most unibody carbon fiber frames require carefully arranging and multitudinous sheets of carbon fiber around a mold, using thermoset composites which are then basically ‘cooked’ to cure. It’s a laborious handmade process that inevitably leads to some variance from model to model.

Arevo’s 3D-printed process instead uses a thermoplastic composite that is cured instantly during printing and is supposed to be “significantly tougher and much more resistant to impact,” according to designer Bill Stephens in a 2019 Eurobike presentation discussing prototype models. The 3D printing, in theory, also gives Arevo more control over how its frames are resistant to the various dynamic forces bikes are subjected to on a regular basis and allows the company to rapidly iterate on designs.

In fact, Arevo says it isn’t really focusing on making the lightest carbon fiber frames anyway. The Superstrata Terra, the non-electric model, has a total weight of about 16.5lbs — very light, but not unheard of.

The proof, however, is in the pudding. The Superstrata’s strength claims make some intuitive sense, but I’d like to see the company show us its prototypes can live up to their claims with some well-designed durability tests against the competition.

It’s also worth noting that while the frame and weight are impressive, the electronics are not particularly remarkable, with a 250W rear hub motor, a 20mph speed limit, and a 125Wh battery. Arevo claims you’ll get up to 60 miles out of that tiny battery, which might just be possible given the use of a torque sensor and the lightweight frame, but I’d estimate the real range to be lower.

Then again, if you’re investing in a bike this light and with these specs, chances are the mild specs won’t matter much to you. This is an ebike for people that want something that rides like a normal bike and has assist as a bonus, as opposed to some models that are basically electric mopeds.

Those reservations aside, the technology behind the design is impressive, and the possibility of thousands of variations through 3D printing is exciting. If the idea of a custom-fit, 3D printed, carbon fiber bike has tickled your fancy, you can place a pre-order over at the Indiegogo campaign. The first units are expected to begin shipping in December. with later batches to go out in early 2021.