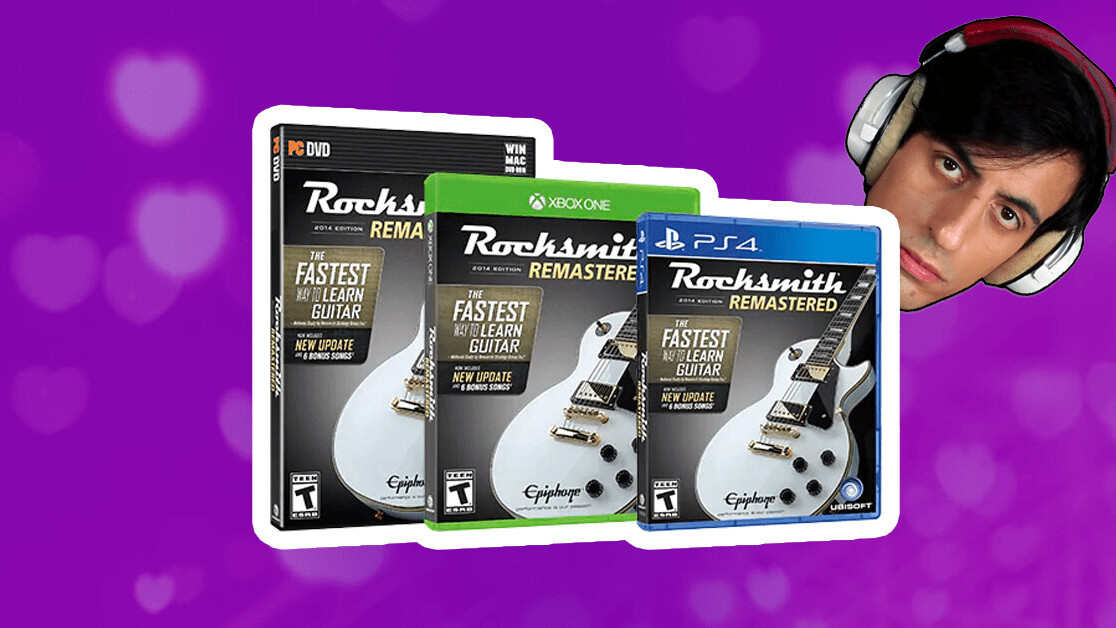 Very recently, I rediscovered — no, fell in love all over again — with the video game that turns players into music maestros: Rocksmith.

If you’ve never heard of it, Rocksmith is, for the most part, exactly like Guitar Hero — except in place of that tacky, five-button plastic “axe,” you use a real guitar or bass.

Rocksmith was released in 2011, originally it was only compatible with your standard six-string. But a year later, Ubisoft added support for bass guitars. And, as a wielder of the low-end, I was intrigued.

I first picked up a bass as part of a school project when I was about 13 years old. Our task was to compose or cover any song, and, here’s the best part, we could use any instruments we wanted to.

[Read: Fender’s new Acoustasonic Stratocaster is the guitar for people who want it both ways]

I was in a group with two of my classmates, one of us was a bit of a guitarist, and they suggested I try the bass. Since that moment, I’ve been obsessed. I now own multiple basses, amps, and I am nurturing an ever growing collection of effects pedals.

[If you were wondering, my classmates and I did an old-school, punk-rock cover of “Catch a Falling Star.” It was all loud, chaotic power chords, with everything dialed up to 11. We passed the class project, probably to prevent us from playing it ever again.]

By the time I was 21 and working full time, I didn’t have as many hours to sit around and noodle on the bass. Listening to music, playing along, and learning new techniques became a luxury for when I had time to spare. I also had housemates who didn’t appreciate 300 watts of wall-shaking bass bouncing around the house. So my bass playing took a back seat, and became a bit stale.

For Christmas one year, I got the special quarter-inch jack to USB cable required to turn your guitar into what is effectively Rocksmith’s controller. I downloaded the PC version of the game, and I was off.

There are two basic sides to Rocksmith: Songs and technique. The learning technique section is really targeted at absolute beginners. It covers things like tuning your guitar, fretting notes, plucking strings, and navigating your way around the neck.

It does go into more advanced techniques like slapping the bass, but it really is still just the basics. It won’t make you the next Mark King, Marcus Miller, or Davie504 overnight — but if it gets you slapping the bass, I’m sure they would approve.

The really neat thing is the amount of control Rocksmith gives you over the song. You can change the difficulty — in other words, add or remove notes to make the song simpler or more complex. This means you can start easy, and build up to a note-perfect rendition.

There’s also a cool feature called the “Riff Repeater.” This lets you zoom in on a specific section of the song and play it over and over, starting slow and building up until you learn it note for note.

Before I first started playing Rocksmith, I thought it would keep me entertained for a while. Maybe it’d help me learn a few songs here and there. But it ended up doing so much more.

Playing Rocksmith opened my eyes to heaps of great bass players and bass lines from songs that, ordinarily, I would never have considered learning. For example, I’ve always been a casual Iron Maiden listener, but I never thought about having a crack at one of Steve Harris’ savage galloping bass lines, but Rocksmith gave me the belief I could.

In other cases, it got me playing songs I knew, but would’ve never even listened to, let alone learned. I’ve ended with songs by the likes of The Knack, Maroon 5, The Kinks, Creedence Clearwater Revival, Queen, and many more in my repertoire.

Don’t worry about running out of songs to learn either, there are mountains. This is what’s really reignited my love for Rocksmith: the endless streams of downloadable content.

As I got back into playing Rocksmith recently, I found the wonderfully active Reddit community where other players share song packs, tips, and just genuinely help others get into the game.

If it’s ever a rainy day or I just want to spend some time alone and switch off from the world, Rocksmith is where I go. While I might never play in a band again, Rocksmith has made me a virtual rock and roll legend. Or maybe just a one-man, virtual, bedroom-based wedding band. And for that, thank you.