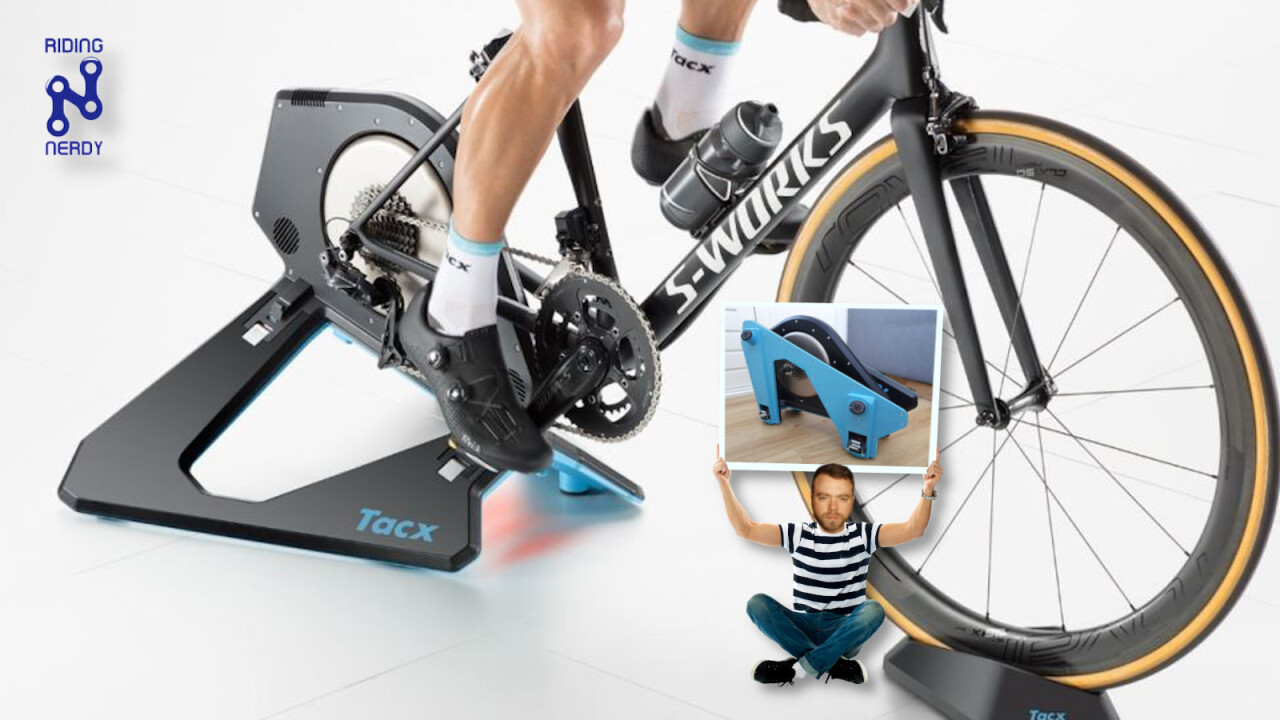 I have a bit of a love-hate relationship with cycling indoors. On one hand, it’s a great way to stay fit through winter, but on the other hand, it’s so boring I’d rather stab myself in the thigh with a rusty compass. But thanks to modern technology, it’s getting a lot more exciting. Perhaps to the point where I only need to slap myself with a spatula to keep things interesting.

Over the past few months, I’ve been using the Tacx Neo 2 smart trainer, and it’s been a revelation of many revolutions.

I’ve put in well over 1,000 virtual km (around 650 miles) on the Neo 2 since mid-December last year, mostly on online gaming-training platform Zwift, but I’ve also put some hours in on Sufferfest  — to find out my thoughts on those platforms click here (Zwift) and here (Sufferfest).

Both of those platforms are great, but what really makes them so enjoyable to use is the hardware they interact with, AKA the smart trainer.

Trainers used to be kinda dumb

Back in the olden days, hardcore cyclists used something colloquially known as “the turbo,” to train through the winter months. A turbo, turbo trainer, indoor trainer, static trainer, or just trainer, is a piece of kit that cyclists hook their bike up to, so they can ride indoors. A typical turbo trainer has a magnetic or fluid unit that attaches to the bike’s rear wheel and applies friction to generate resistance to pedal against.

These old-style, wheel-on trainers were loud, uncomfortable, didn’t feel much like riding on the road, and good gracious were they monotonous. I’ve spent many an hour sweating myself silly atop a turbo, using one felt akin to a coal miner at the pit wall; hot, hunched over, uncomfortable, and unpleasant, but necessary, work.

Modern “smart trainers,” along with the use of software like Zwift and the Sufferfest, have managed to curtail nearly all the negatives of cycling indoors, and the experience is leaps and bounds more enjoyable than it once was.

The smart trainer I’ve been using isn’t the latest from Tacx. In the past 12 months, the Dutch company has brought out the Neo 2T, a slightly updated version of the Neo 2. For all intent and purpose, the 2T is the exact same machine, but with a few refinements to make it quieter and more powerful. In my opinion, these are luxuries and not necessities, because the Neo 2 is already hella powerful, and perfectly quiet.

Tacx first released the Neo 2 back in 2018, but it’s standing the test of time very well. It also appears to be a very robust unit, I’ve been using a press review machine that’s clearly well-used and it still works perfectly.

At the time of writing, the Neo 2 can be bought for around £900 ($1,100), the newer 2T retails at about £1,200 ($1,500). All things considered, I’d say it’s probably one of the best value high-end smart trainer out there at the moment. Other big hitters worth checking out are the Wahoo Kickr, and the Elite Drivo II.

[Read: This indoor cycling app is making me suffer, and it’s highly effective]

All these machines are known as direct drive smart trainers, meaning you take the rear wheel off your bike, and attach the bike and its drivetrain directly to the trainer itself. This does mean you need to put a cassette (cogs/gears) on the trainer, at small additional expense, but the upside is you don’t wear out your wheel or tire.

It also means that resistance instant, trainer feedback is more direct, and there’s a lot less “wheel slippage” because the trainer isn’t relying on the friction between tire and resistance unit.

Once you’ve got the wheel off, and your bike fitted, things couldn’t be simpler. Get on and start pedaling. Mounting your bike to this kind of trainer is pretty much the same as fitting a rear wheel.

The trainer works with or without power, the only difference being that without power, it will stop working as soon as you stop pedaling. If you use platforms like Zwift, in my experience, it’s best to use the power supply to maintain Bluetooth connection and to enable the virtual flywheel to really add another level of realism to indoor rides.

And this is where the Neo 2 really wins, its ability to simulate real world riding is other worldly.

To generate resistance, the Neo 2 uses a ring of neodymium magnets (hence its name) around its main flywheel, and an electric motor. This combination of magnets and motor can be used to spin the flywheel and make it feel like you’re coasting downhill or generated masses of resistance to simulate the hardest of climbs.

These magnets are also incredibly powerful. The Tacx Neo 2 can generate 2,2000 watts of resistance and simulate gradients of up to 25%. In other words, this is enough resistance for pretty much everyone in the world. There are only a few handfuls of elite Olympic level track sprinters that could hit more than 2,200 watts, and when they do it’ll be for a few seconds. For the rest of us, the Neo 2 will never leave anyone wanting more.

What’s more, because of its ability to generate high resistance and its direct drive setup, there is no slip when smashing out short, high power intervals. There is some “virtual wheel slip” in some situations, but this only happens when using easier gears and riding up steep virtual gradients.

Historically, I’ve steered clear of sprint intervals on indoor trainers because the wheel slip gets in the way far too much. But on the Neo, I can wind the gear up, lower my cadence, and get ready for a big explosive burst without shredding my wheel off the trainer.

Another big plus about the Neo 2 is its power measurement — this makes it great for long steady intervals too. According to Tacx, the Neo 2 is accurate to within 1%. What’s more, it never needs calibrating, meaning you can just get on and ride day after day, and be sure you’re gathering accurate data.

I’m not going to go into the nitty gritty of power measurement here, but if you are interested, I recommended reading this highly detailed review of the Neo 2 from fitness tech guru DC Rainmaker. The TL;DR though, is that the Neo line of trainers are the most accurate smart trainers you can buy.

If you’re interested in improving your fitness, being able to accurately measure your improvement (read: power) is incredibly important. Accurate power measurement means you can set your training zones accurately, train consistently, and be more efficient with your time. For me, it means I’m training less, recovering more, and still making improvements.

The Neo’s power accuracy has actually become a bit of a meme in some cycling circles. I joined a few owner’s groups on Facebook to get a feel for wider public experience of the device, and pretty much the first thing everyone comments on is how low their power readings seem to be.

In reality though, it’s likely that their original power meter was just over reading, and they have been welcomed to Tacx with what’s become known as “The Neo Effect.”

Over my time using the Neo 2 (and Zwift and Sufferfest) my functional threshold power (the power I can output for an hour at maximal effort) has increased by about 10% and my peak 5-second power has gone up by approximately 15%. This isn’t bad for about 10 weeks of winter training, that had Christmas and New Year slap bang in the middle.

All of these features and results are great to have, but what I’ve fallen in love with most about the Neo 2, is just how quiet it is.

I train with my window open and can barely hear the trainer over the noise from the road outside my flat — and it’s not a very busy road. I barely have to adjust the volume on my TV above normal levels. On my old wheel-on trainer, I would use rubber mats to dampen vibration, and in-ear headphones to block out as much sound as possible. I would also never dare to use the trainer at awkward times of the day for fear of upsetting my housemates or neighbors.

It might seem trivial, but being able to cycle and listen to the TV or music at a sensible level is not only practically great when you live in a flat with left, right, upstairs, and downstairs neighbors, but its impact on overall mental exhaustion is tremendous. After finishing a session on the smart trainer, I don’t feel aurally and mentally exhausted like I used to after using a wheel-on trainer.

Getting the most out your trainer

Now, there’s a colossal caveat to using a smart trainer and that’s the software or app that you employ to control it.

All smart trainers, Neo 2 included, will come with an app from the manufacturer that you can load on to your tablet or smartphone to use as a control center of sorts for your trainer.

The Tacx app bundled with the Neo 2 is perfectly adequate for controlling the trainer and getting in a good workout. If I could only afford the trainer and nothing else, I’d be perfectly happy using this to control my workouts. The only real downside is that workouts need to be planned or controlled manually, but some people will actually like this level of control.

Where smart trainers come into their own is when paired with a laptop, tablet, or smartphone running something like Zwift or the Sufferfest.

In the capable hands of these platforms the smart trainer simulates gradients you see on screen to create a unique and seamless cycling experience. It’s so good I will quite happily hop on the trainer instead of going outside — if it’s wet and cold out that is.

Back in the olden days, I would avoid the trainer at all costs, I’d rather get cold and wet to the bone than use that wretched thing. But thanks to smart trainers, cycling indoors is far less shit than it used to be.