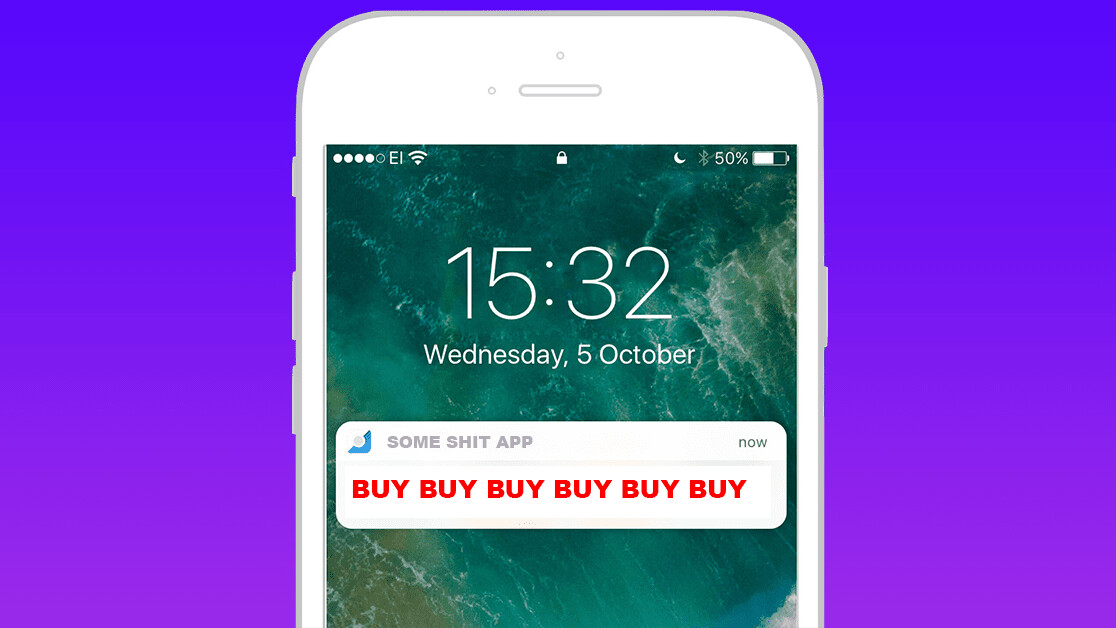 Today, Apple updated its App Store guidelines. A lot of the time this isn’t particularly interesting, but this time around something really stuck out: Apple will soon allow push notification ads on iOS.

Yep, you might soon feel your phone vibrate, pull it out your pocket, and find an advert for some piece of shit there.

This story was first reported in 9to5Mac and, basically, it means that app developers will be able to send push notifications for “direct marketing purposes.” God, this is depressing me just writing about it.

[SLAP YOUR PEEPERS ON THIS: Your gadgets are likely made in Chinese forced labor camps]

Read the full section from the App Store guidelines there:

Push Notifications must not be required for the app to function, and should not be used to send sensitive personal or confidential information. Push Notifications should not be used for promotions or direct marketing purposes unless customers have explicitly opted in to receive them via consent language displayed in your app’s UI, and you provide a method in your app for a user to opt out from receiving such messages. Abuse of these services may result in revocation of your privileges.

Now, as bad as this is, it’s important to note it could be way worse. According to those guidelines, you’ll have to specifically opt in to receive push notification ads on iOS. On top of this, developers will also have to provide an opt-out function in their apps.

That doesn’t sound too bad — why are you worried about push notification ads on iOS then?

Well, first off, the language in the App Store guidelines has a lot of wiggle room. You can use push notifications as ads if customers have “explicitly opted in to receive them via consent language displayed in [the] app’s UI.”

From my understanding, a single check box on a menu when you first start the app would be enough. And, considering lots of apps already have this, it’s probably going to be quite easy to accept push notification ads without really know what you’re doing.

And, let me ask you this: How many apps do you keep meaning to turn push notifications off for, but you kinda leave them there anyway, because you’re busy and can’t be bothered right now, but you’ll eventually get to it?

The easy counter argument to the above is that people should be aware enough to not even get into the situation where they receive push notification ads on iOS. That’s wishful thinking though. Just because some individuals aren’t as tech-aware as you doesn’t mean they should be punished with adverts.

No, there’s something worse than this.

What’s the worst part then?

It’s to do with the fundamental nature of Apple and its ecosystem.

One of the reasons I’m content with the company getting me to pay over-the-odds for its hardware is that Apple, unlike Google, doesn’t rely on ads for its revenue. In other words, you pay for some level of privacy and protection from third parties.

While getting push notification ads on iOS isn’t exactly the same as being sold stuff in Settings, the decision is a slippery slope. I’m not saying that next year iOS will be filled with old internet style pop-ups, but it wouldn’t surprise me if Apple began to slowly loosen some other regulations in its wake.

None of this is what I want from Apple. Which sucks.

At the end of the day though, this probably won’t impact me or you. I’m sure as hell gonna make sure that push notification ads on my iPhone are never even turned on. It’s just this whole thing doesn’t feel very Apple. At least not in the way I imagine the company being — which is probably the biggest mistake of all.

Anyway, keep an eye out for apps trying to send you push notification ads on iOS and stop that shit right in its tracks.