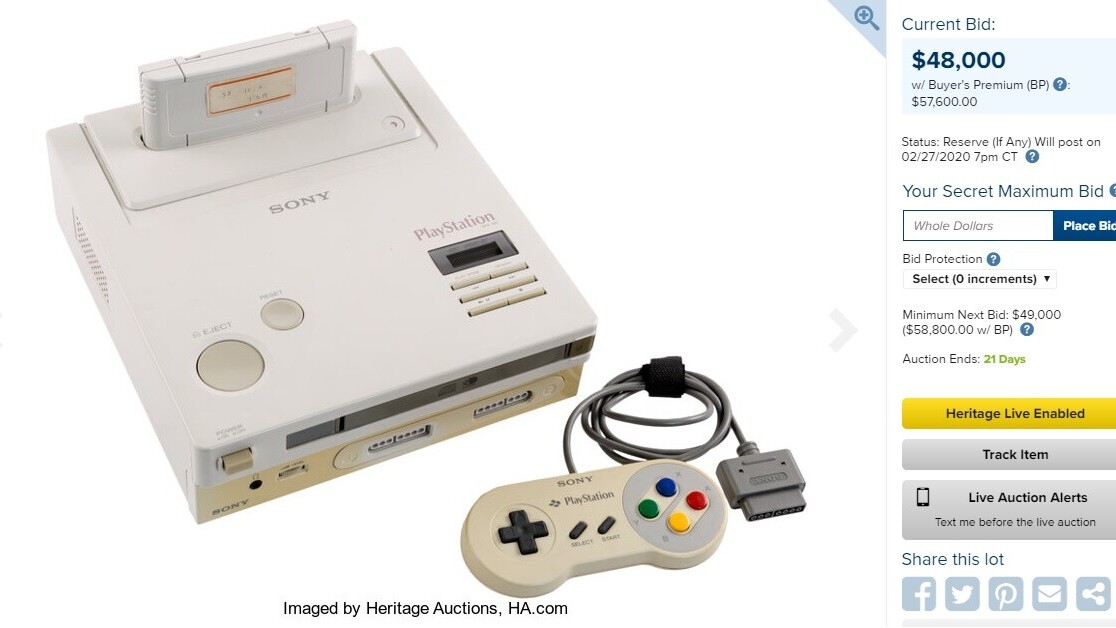 Update (1:58PM, February 14, 2020): Oculus co-founder Palmer Luckey claims to have the highest bid on the Nintendo Play Station prototype at $360,000. He explained in a tweet that he’s especially keen to pick it up because he is “on a quest to digitize and preserve the history of physical videogames [sic]. “

It’s happening: the rare (possibly unique) Nintendo Play Station prototype is for sale. The auction house has opened up the bidding, and so far the price is sitting pretty at $48,000 — and the auction will be open for the next 21 days.

In case you don’t know what a “Nintendo Play Station” is, you can read a quick primer here. In the smallest possible nutshell, it was a console that never existed outside of the crushed dreams of the fledging company Sony and a few prototypes destined for destruction. Terry Diebold, the current owner, decided to put it up for auction after years of showing it off, and it looks like the time is now. It’s being sold by Heritage Auctions, an auction house known for carrying various rare collectibles — last December a sealed copy of Mega Man sold at one of its auctions for $75,000.

[Read: Okay, fine, there is no Nintendo Switch Pro on the way (this year)]

If it sells for that price, that’d make it one of the most expensive consoles ever. There have been a few that exceed that price, but most of them are just ordinary consoles dipped in gold or jewels. This is a piece of gaming history, up there with the likes of that sealed copy of Super Mario Bros or that gold copy of Nintendo World Championships. Heritage Auctions agrees, saying in the item description:

This prototype has been around the world and back again, admired and appreciated by video game enthusiasts from all over. Even though this is the closing of this portion of its narrative, it will continue to remain a pivotal piece of video game history no matter where it ends up.

I mention this is a museum piece because I’m not sure I’d want to attempt to play games on it. The Heritage description mentions employees have “played a couple of rounds of Mortal Kombat on it,” but is quick to remind everyone that this isn’t a console with exclusive games. It does, however, have the ability to play music, and has a few features that set it apart from both the SNES and the actual PlayStation:

Though the CD-ROM drive was not currently working when it was found in 2009, it has since been repaired by Benjamin Heckendorn, a YouTube personality known for his console repair videos. It now has the ability to play music CDs like the commercially produced PlayStation, but there is no proprietary software that’s known to have been made during the prototype‘s development. The prototype‘s small screen on the top of the console shows the user which music track is currently being played from the CD, allowing the user to listen to their own music and play a cartridge-based game at the same time.

Just for reference, Diebold obtained the prototype bidding on a lot from a bankrupt credit card company for a $75. Even if the bidding doesn’t go any higher than $48,000 (and the figurative night is young, so I suspect it will), that’ll still be a tidy profit for the man who’s been bussing the console around to conventions where we could gawk at it for years. At the moment, we can’t see who put in the current high bid, but we can only hope it’s someone who’s going to treat this thing with the care it deserves.

Proxy bidding (which is what those who’re bidding on it now are doing) ends on March 6, whereupon the console will be up for a live floor auction.