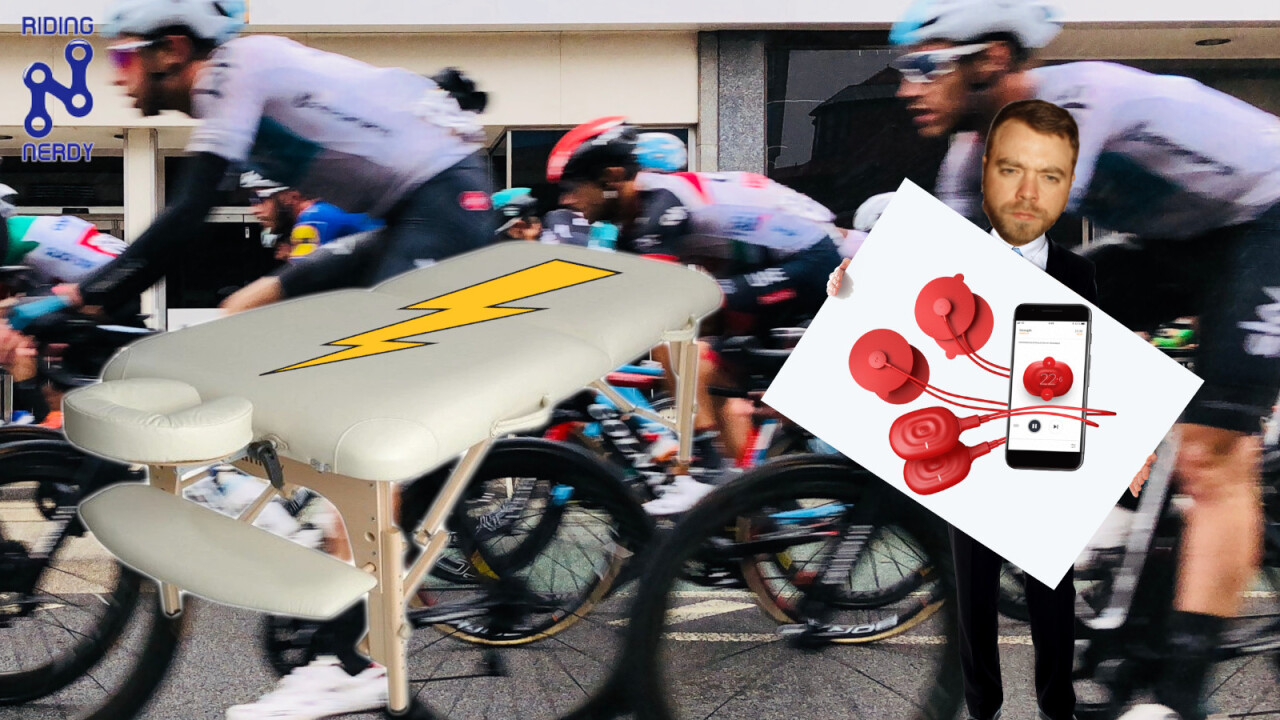 Lance Armstrong has been fighting legal battles left right and center with former sponsors, the US government, and ex-teammates since coming clean about his doping exploits. Last year, Armstrong finally settled a long-running federal case – in which he was being sued for nearly $100 million – for just $5 million. With all that behind him, what next for the Texan? Venture capital and investing in wellness tech – obviously.

Armstrong is one of the co-founders of Next Ventures, an investment firm focusing on sports, fitness, and wellness tech. Early last year, it made its first investment into a company that makes electrical muscle stimulation devices called PowerDot.

The former cyclist often cites an early $100,000 investment in Uber for saving him and his family – financially speaking – during the intense litigation procedures. Doping history to one side, maybe he’s got an eye for tech? I got hands on with the PowerDot DUO over the past few weeks to see if that’s true.

I typically cycle around between 150-300c km (100 – 200 miles) per week, and play squash regularly. It’s safe to say there’s usually a part of my body – usually my legs – that’s aching; so I’m most keen to see if the PowerDot can alleviate some of that discomfort and help me take my recovery to the next level.

PowerDot is an electric muscle stimulation device. You’d be forgiven for thinking it’s similar to abdominal bands that promise to cut fat, increase muscle, and make your body Baywatch ready in just weeks without actually exercising. Thankfully, PowerDot takes a different tack. It positions itself as a “smart muscle recovery and performance tool.” It doesn’t claim to make you fitter, but it might lend a helping hand to your recovery.

With consistent and regular use PowerDot says its device can help athletes – and me, not an athlete – recover faster, reduce muscle soreness, increase strength and endurance, and generally “feel their best.”

The tech behind the premise is fairly simple and is nothing new. The device relies on something called the Gate Control theory, which claims a non-painful stimulus (in this case electricity), can block the pathways that transfer pain signals to the brain, thus lessening the sensation of discomfort. Note, these systems don’t actually heal you, but they can lessen your perception of pain.

The device uses transcutaneous electrical signals (TENS) to instigate neuromuscular contractions. In other words, electricity makes your muscle spasm in a controlled fashion.

Different electrical frequencies elicit different responses from the body and can train either slow-twitch or fast-twitch muscle fibers, provide a workout or a massage depending, and increase circulation or so PowerDot claims.

The jury is still out on whether TENS actually works. The UK’s National Health Service (NHS) does acknowledge that transcutaneous electrical nerve stimulation can reduce pain, though. Results tend to vary between individuals and the specific conditions being treated.

At the moment, there’s not currently enough good quality studies to definitively say if TENS has a universally positive impact on health. But what’s the worst that could happen?

Actually, quite a lot. The PowerDot comes with a very comprehensive user manual (by modern standards), in which many pages are dedicated to all the possible side effects that can be brought about from improper use of the device. Importantly, this device is designed to be used by already healthy individuals, if you have any concerns please speak to a real doctor. What else is in the box besides the manual?

Well, you get two “Dots” (you only get one in the PowerDot Uno), four connecting cables, a rubberized zip-up travel case, and a set of electrode pads. On first impressions, the Dots are cute, light, and appear well-made.

The travel case is a very nice touch as there are quite a few components that could easily be mislaid and lost.

The Dots are held in the case using the magnetic connector, which is also how the Dots and cables connect to the electrode pads.

Before you can sit down and use the PowerDot for the first time you must download the PowerDot app (available for both iOS and Android) and pair the dots to your phone. And here things got kind of frustrating.

Getting down to business with the PowerDot

My first attempt to pair the dots was challenging. Only one of the dots paired and activated as it should have. No matter what I tried, I couldn’t get the second Dot to pair.

It turns out it was faulty, PowerDot swiftly replaced this and are analyzing the dodgy unit. I will update this piece when we know the cause of the problem. The company assured me this was a freak incident, and a quick scan of the Google Play Store and Apple App store shows customers are on the whole very happy with the app and the device.

When you’ve got the Dots connected and paired with your phone you can find a program to suit your needs. As I spend many hours each week pedaling, I’m often carting round sore, heavy legs. I thought one of the PowerDot’s massage programs, designed for recovery, would suit me best.

So, one evening, I sat down in my chair and began. I peeled off the electrode pads, followed the easy-to-use directions in the app on where to stick them on my quads, attached and wired up the Dots, clicked the wires to the magnetic connectors on the electrode pads, and started the program.

It’s also worth pointing out that the electrode pads don’t stick well over hair. I had no problems on my legs, but I won’t go into more detail than that, for now.

If you’ve never used a TENS system before you will probably be startled by the sensation. Imagine that feeling you get when you stick your tongue on a nine volt battery (please don’t), but coursing through your muscles.

It’s not painful, it’s not really even uncomfortable after a while, but it’s certainly unusual. Don’t worry about that though, in the app you can control the overall strength of the stimulation, and you can even adjust each electrode channel (left or right) to dial in a level of stimulation that works for you.

Just out of curiosity, I turned the power up as far as I dared. I wimped out with severe muscular engagement long before I reached PowerDot’s full potential.

The massage setting is fairly simple, it runs for about 20 minutes and goes through three phases. Each phase causes your muscle to contract in a slightly different way. The first phase instigates fast and frequent contractions, the second phase contractions are slower and less frequent, the final phase is even slower still.

After running the massage program, my quads felt lighter and fresher, standing up out of my chair feels less laborious than it did before. The next morning was even more remarkable, as I woke and climbed out of bed, I realized my legs were nowhere near as stiff as they are usually. Typically, first thing in the morning I need to move around and stretch off a bit to loosen up.

Over the course of three months, I used the PowerDot during the evening after bike rides and squash games, usually just as I’m winding down to go to bed. I can safely report, the fresh feeling the morning after wasn’t a one off. I regularly awoke feeling more relaxed and looser than I would normally expect to, it’s almost as if the previous day’s workout wasn’t quite as intense as it actually was.

The massage setting is just one of many settings available on the PowerDot. The TENS device also has muscle strength, endurance, and wellness programs. The strength and endurance programs claim to increase athletic performance and muscle hypertrophy (eg, gains). Wellness programs are a little less clear on what they’re supposed to do, and are designed to target your joints rather than large muscle groups.

As it happens, during a 300 km week on the bike and two 90-minute squash sessions an old injury on my left knee started to present a bit of discomfort. Normally, this injury starts to rear its ugly head when I’m doing too much and not recovering adequately. However, using the PowerDot’s wellness program for the knee a couple of times seemed to take the edge off my usual discomfort. This was along with icing, stretching, foam rolling, and additional use of the PowerDot on my iliotibial band (the fascia that runs down the outside of your thigh).

After using PowerDot regularly after workouts, I certainly felt fresher than I would have otherwise. In some ways though, it lured me into a false sense of security.

Following a hard ride of about 60 km, I used the PowerDot to recover from the day’s effort. Come Sunday, I felt sprightly and fresh. So I saddled up and went for another long and hard ride.

It became quickly evident, about one minute into the first of four 10-minute intervals, that I did not have the strength or energy to complete my intended workout. Even though I felt great, I didn’t have any energy.

While the PowerDot might make you feel fresher, it’s not a replacement for a structured training plan and recovery.

It isn’t going to transform you into an athletic hulk who can smash every workout, but for me, it sped up recovery and let me go about my post workout days with far more ease and less discomfort. It’s certainly a tool I’d recommend to people who have the cash.

But as ever. There’s a catch.

For an app and what is in reality a fairly simple collection of electronics, that feels pretty steep. A quick search for a TENS device will throw up a raft of cheaper alternatives. It should also be noted that the electrode pads have a lifespan of about 30 applications, you can buy replacements of course, for about $18 a set. It’s trivial in the grand scheme of things, but it’s a running cost worth keeping in mind.

I must admit, I’m far more impressed with this device than I thought I would be. Besides being well-made, it has actually taken my recovery to a new level. Having the device means I take recovery seriously which undoubedtly helps too.