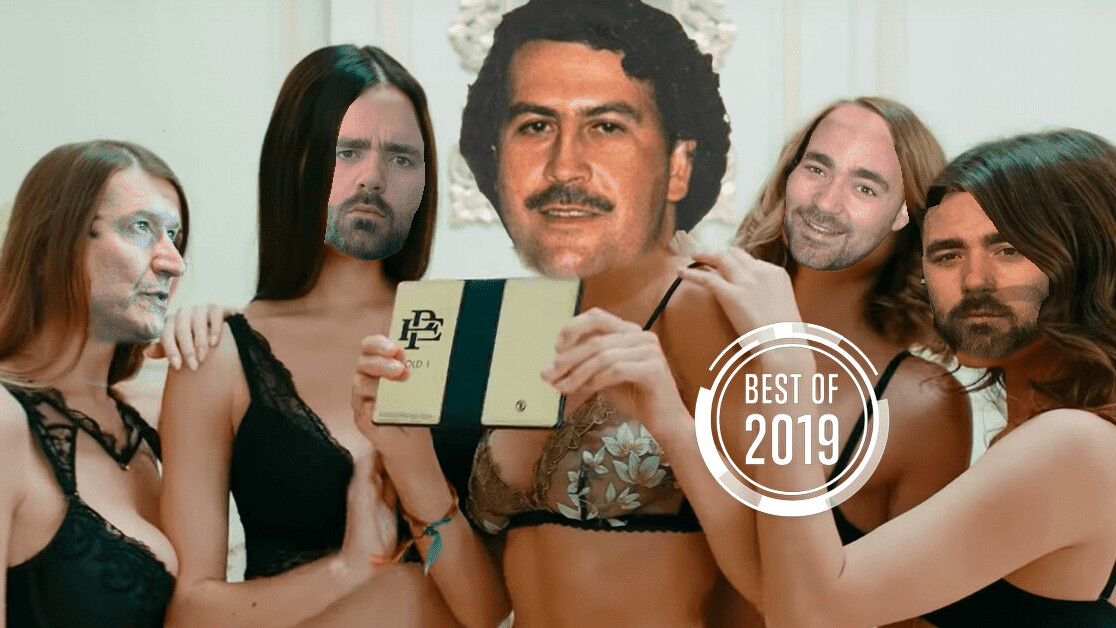 Sometimes, there’s an event so momentous, an idea so revelatory, a product so astounding that the only way to truly communicate its importance is by creating a 30 second promo kit filled with women in lingerie.

What? You think that’s weird? Well look, sorry, but I didn’t make the rules. I’m pretty confident it says that in the bible or something, okay? Actually, yeah, now I think of it; remember that painting of Jesus having his last meal? With those 12 people all around him? I’m like 99 percent sure they were all draped in some of Ann Summers’ finest. That’s it. That’s where the rule comes from.

But yes, friends, you guessed it correctly, I’m talking about Pablo Escobar’s brother releasing a $349 foldable phone: the Fold 1. We covered the announcement here, but this piece is doing something different: analysis.

We’re going to be going deep into the 30 second video that the people (men, it was definitely all men) behind the Fold 1 created to advertise the phone. First off though, you need to watch the damn thing:

So, why am I doing this? Why have I spent the better part of a day thinkfluencing? Because all art deserves analysis, people.

Men… we need to talk. Yeah, come closer, sit on my knee. Now, tell me, what’s going on? Why, with all our privilege, all our potential, everything we’ve been given, did we deign to create this video?

Look, I know you might be over there right now saying “nOt aLL MeN,” and “I Had notHInG tO do WiTH tHIs Video SO why ARE yoU BLamIng Me, CAlluM, thaT Doesn’T seem fAir, sOME Of uS ArE DecenT,” but “shhhhh,” I say in return [at this point I put my finger over your lips], “we’re all responsible.”

Try and explain to me how this genuine shot from a phone advert in 2019 is anything but the fault of us, men?

Somewhere, a group of dudes sat around and came up with the idea for this video. Actual people (read: men). They probably look back and believe they were doing it in leather chairs, smoking cigars, but I bet it was around a stained plastic table in the basement of their uncle’s takeaway that smells slightly of piss.

At some point during this meeting of the minds they came to the conclusion that one or both of the following things are true:

Or do we want to tackle whatever it is that causes our gender to act like this and maybe meet up and go for a walk and talk about our feelings a bit?

Look, I’m not Emmeline Pankhurst or anything, but I do know several women. Okay, a few. Maybe a couple. However many women I know, it’s not hugely important, because whatever that number is, I can safely say it’s higher than the amount the creators of the Escobar Fold 1 phone have met.

I’m not saying that the people behind the device are cum-stained incels, but I’m also not not saying that. I guess my only point is I’ve never really come across a group of women doing this:

How do I know this? Well, I guess the fact I’ve never called up my mates, got us all to slip into our finest trunks and thongs, rubbed our bodies against each, and laughed at a single phone… in slow motion.

In fact, aside from a little bit of walking, sitting, standing, and smiling, I’m not really sure I’ve seen women do very much of what’s in this video. In fact, I’m not sure I’ve seen anyone of any gender ever walk, sit, stand, or smile in the way it’s portrayed here. This actually begs a further question: the people working at Pablo Escobar’s brothers company ever met… anyone?

But — maybe, just maybe — women actually do this all the time and it’s me who’s the big old sexist. Makes you think. Really, it makes you think.

So, the title of this video is “Escobar Fold 1 – Escobar Girls show the $349 foldable phone.” On one hand, this is correct. Aside from two seconds at the start of the video and the credits at the end, the Fold 1 is in every shot.

Or, more accurately, 50 percent of the phone is. In other words, you only ever see the device from this angle:

This suggests that the phone isn’t functional. But — and to be fair — Escobar Inc. did release a video showing the Fold 1 in action:

All well and good, right? Well, apart from the fact it has the phrase “Real Video” in the its title, which — because of the “If You Say It Is, It Probably Isn’t” rule — immediately makes me think this, in fact, isn’t real at all.

But, that’s not the point. That is the fact this is a video that’s meant to show the Fold 1, yet all we have are people pretending to look at it. I mean, there’s no way it’s actually working in this shoot, as one of the models actually looks like she’s going to take a bite out of the phone:

But… it’s probably mainly to distract people from understanding there’s no way a $349 folding phone will work even a little bit. Oh, and the sexual harassing thing too.

This sure is a crock of shit

Okay, so at this point there’s not a huge amount more to analyze in the video. Should I talk about the clock in the background of an opening shot that seems far sweeter than the piece of shit phone they’re shoveling women’s bodies over?

Or maybe just how weird it is that the name of the phone (in this case, the Fold 1) is written on the phone itself in text so large, the font size was probably set by your (insert Brexit- or Trump- depending on your nationally) voting grandma?

I’m also sure I could spin a few hundred words out of the tiny man in the painting below, who seems to be standing at the base of a beautiful hillside, appearing to contemplate and consider issues so massive they could crush the human spirit if their full weight was allowed to fall on a normal, regular person, but, friends and lovers, this is no ordinary human, no, not at all — instead, this individual is of such a sound constitution, has such an all-encompassing, compassionate mind, is so pure and righteous that they, and they alone, are able to bear and manage questions such as “how much of a dickhead do you have to be to make this dumb ass fucking sexist promo video?”

Seriously, the fuck? I think the only positive thing about this neanderthal approach to product advertising is that at least it’s some shady fucking company pushing it out, rather than, I dunno, Samsung or someone.

The technology industry is already a huge sausage fest with a massive sexism problem, and Pablo Escobar’s brother’s company doesn’t exactly improve this situation. Whether it’s booth babes at conferences, female sex toys being banned from trade shows, or even Apple’s fucking credit card being straight-up sexist, women — as either consumers or as a literal part of the industry — are not treated or experience life as equal citizens.

And this is a goddamn tragedy.

Now, I’m not out here saying that Pablo Escobar’s brother is such a moral compass and influential figure in tech sector that this is going to set women back another 20 years, but it’s indicative of a historical attitude that can be summed up as “men like tech and women, so sell them the former with the latter.”

This regressive and repressive attitude has led to fewer women applying to STEM course, has led to women feeling unwelcome at tech companies, has led to the gender imbalance that plagues the entire sector. And this attitude has no place anywhere, no matter how bizarre, ridiculous, or peripheral the product or company is.

But, before we go, I want to point something out: this piece is in no way an attack on the women in this video. They can do whatever the hell they want with their bodies and I have no right to tell them what’s right or wrong. The issue is that a technology company is using its influence and money to market a product in a way that is deliberately exclusionist of women, something that won’t harm the individuals in this video per se, but will have an impact on people working in the sector.