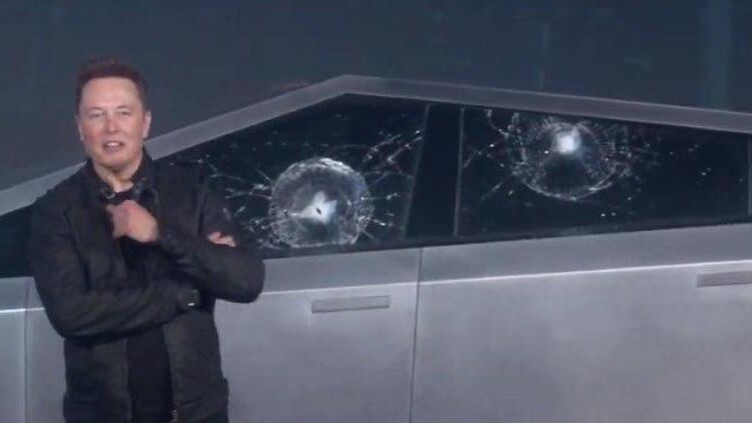 One of the biggest selling points for Tesla’s new Cybertruck is that its glass is supposed to be near indestructible. So it didn’t go so well when during its live presentation, throwing a steel bass at the truck‘s window caused it to, umm, get destructed. Twice.

To be fair, the steel ball Tesla was throwing at the window didn’t actually go through the window as it presumably would have on a normal car door. Tesla also demonstrated a naked sheet of the material emerging unscathed during the presentation, which made the eventual cracks particularly disappointing/hilariously awkward.

People have been providing theories on why the glass cracked ever since – aside from the fact that glass is, you know, glass – but now Musk is stepping in:

Yup. Sledgehammer impact on door cracked base of glass, which is why steel ball didn’t bounce off. Should have done steel ball on window, *then* sledgehammer the door. Next time …

So it turns out hitting a door with a sledgehammer isn’t good for the glass underneath it. Got it.

On Friday, Musk had provided further evidence the glass could withstand the steel ball in a video recorded “right before launch”:

Franz throws steel ball at Cybertruck window right before launch. Guess we have some improvements to make before production haha. pic.twitter.com/eB0o4tlPoz

Although as some have pointed out, the rear door wasn’t hit with a sledgehammer, so it’s not clear why that initial impact might’ve affected the glass.

A related theory – as pointed out by CleanTechnica – has to do with the fact that hitting the windows with the sledgehammer caused them to roll down slightly. This meant the windows weren’t properly braced against the frame, leaving them more vulnerable.

Either way, you can bet Tesla will try to make sure this demo goes better by the time the vehicle is ready for production.