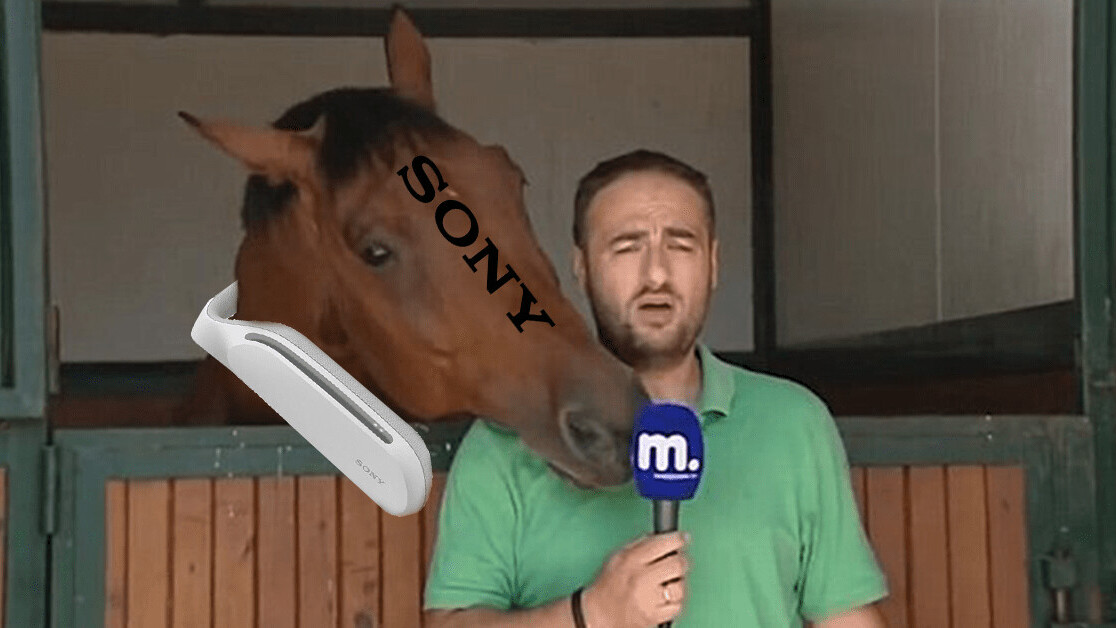 You know what’s boring and lame and passé and boomer and stupid? Watching your television with normal speakers. Just the thought of it is making me want to hurl all over the nearest soundbar.

And, friends, Sony knows this. Sony is here for you. Shh, let Sony hold you. Sony‘s getting closer now.

Sony is wrapping itself around your neck, you’re worried for a moment, but then Sony starts to buzz and vibrate pleasantly on your shoulders.

You look down and — shock, horror, joy, surprise — it’s not Sony at all! No, it’s the company’s SRS-WS1 Immersive Wearable Speaker.

And it’s coming to the United States.

While Sony‘s neck speaker might bear some resemblance to the Bose SoundWear, it has a different purpose and functionality. Rather than being an all-round speaker you wear, it’s been created to enhance your TV-watching experience.

It works like this. You attach a transmitter to your TV‘s audio output and then you slip the sultry sound collar over your shoulders. The audio is then piped in through the neck speaker, alongside some vibrations.

It’s like a homewear version of the N64’s rumble pak. But with, uh, sound.

The transmitter can send audio to two neck speakers, meaning a pair of you can get in on the shoulder sound action. While Sony‘s neck speaker can connect to your smartphone via a cable, it’s really designed for at home use. This makes sense, as I still have no idea who the Bose SoundWear is actually aimed at.

Battery-wise, Sony says its neck speaker will work for around seven hours, which should get you through a few movies easily. And when it runs out? Charging to full will take about three hours.

Will Sony‘s neck speaker become the future of home entertainment? Probably not — especially when it’s selling for between $250 and $300.

Also, I’m not sure plopping a bit of moulded plastic on my shoulders when I want to watch a movie is really an experience I desire.

Despite saying this, I’m going to be a big old hypocrite. Although the Sony neck speaker sounds dumb, I really, really want to try it out.

Plus, speakers are boring.