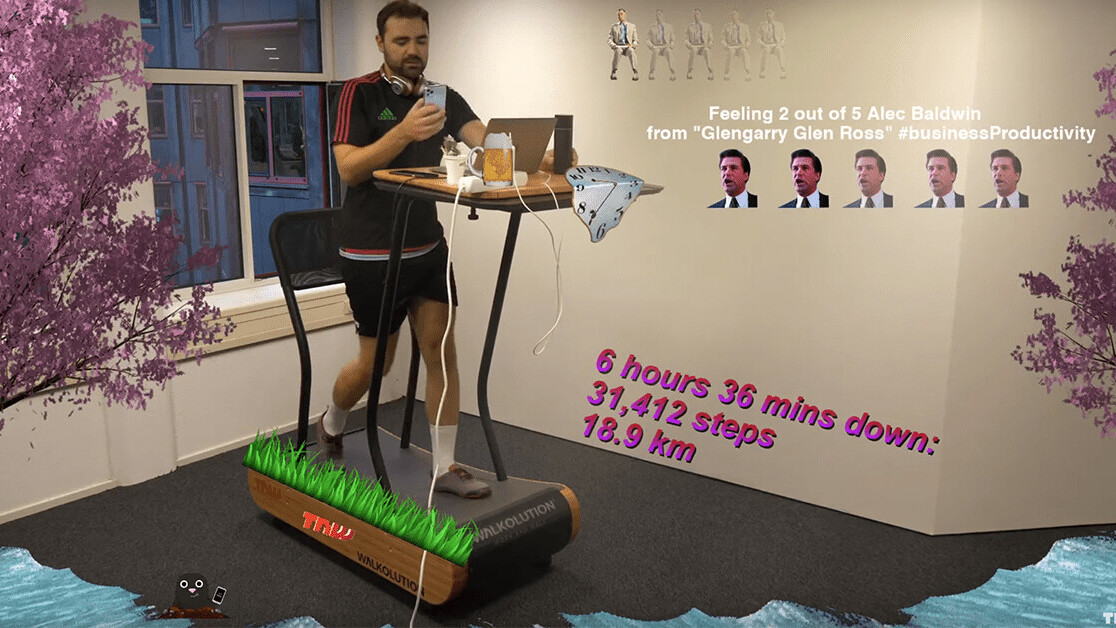 Recently, and as the headline makes clear, I spent a workday on a treadmill desk. Yep, I partook in a full seven hours of walking, while doing my job. Why? Well, I’d direct you to the piece I wrote at the time.

This article is going to do something different: look at what it’s actually like to spend a full day walking and working — and share some of my findings along the way. Who knows, it might be useful if you’re thinking of getting something like this for your home and office.

Want to see what it was like? Well, I’ll point you towards the livestream of (almost) the whole event, which — if you’re insane — you can watch in full here:

I was actually productive

During the seven hours, I wrote probably my daily average of articles. Which isn’t bad considering I was sweaty and irritable for much of the process.

But I wouldn’t say that my productivity produced quality

I found that my work wasn’t quite up to my usual standards. It wasn’t bad, but it also wasn’t amazing. It also felt like everything took a much longer time than I anticipated.

Answering emails or responding to Slack messages was fine, but writing anything longer was much more of a struggle. Basically, the constant motion of my body meant it was tricky to actually concentrate on the screen, as my eyes were bobbing everywhere.

…but it does get easier over time

Ah, the brain. On one hand it’s responsible for that oppressive feeling of dread cloaked over my entire life, but on the other it is adaptable. So, after about an hour of walking and typing, I barely recognized the fact I was moving.

Unfortunately though, I found that my creativity and clarity of thought wasn’t up to much. I find that going outside for a walk really gets my mind whirring, but doing it on a treadmill desk didn’t have the same effect.

The machine I used is good, but could do with some improvements

The Walkolution is an interesting bit of kit. It’s non-electric and works pretty well, but it has a few downsides.

One of these is the manner in which you have to generate the movement of the treadmill yourself. On one hand, this okay, because you can move at your own pace. But this design has a flaw.

This curved area at the top of Walkolution (which you can see below) feels a bit different from, you know, actually walking. You have to put some force onto the machine to keep it moving, and it takes a little while to get used to that method.

Another issue I had was with the desk part. As I was walking, the work surface constantly wobbled.

This wasn’t a huge issue for my vision as it seemed roughly in sync with my body movements, but it did mean other things (such as my water bottle) kept falling off the Walkolution. It’d be great if there was an automatic stablization feature, but I do understand this would increase the cost of the device.

These things are expensive

A Walkolution desk starts from just under $4,000. In other words, you best hope your company is paying for the treadmill desks.

But you probably weren’t considering that anyway, right?

Who would treadmill desks be suitable for?

Well, if you’re in an office that wants to get a bit of exercise in while working, it could be for you.

Thing is, we’ve had them for a couple of months at TNW and, aside from a rush at the beginning, people haven’t really used them that much. We could just be lazy though.

Honestly, while working on the treadmill desk was entertaining for a bit, the whole idea seems middling. You’re neither getting in a great workout, or doing fantastic work. In my opinion, you’d be better served working at a regular desk, and then going for a run or something at lunch. That way you get the best of both worlds.

Still, anything that encourages people to move and get healthier at work isn’t a bad thing, so if you think it’d work for you, go right ahead.