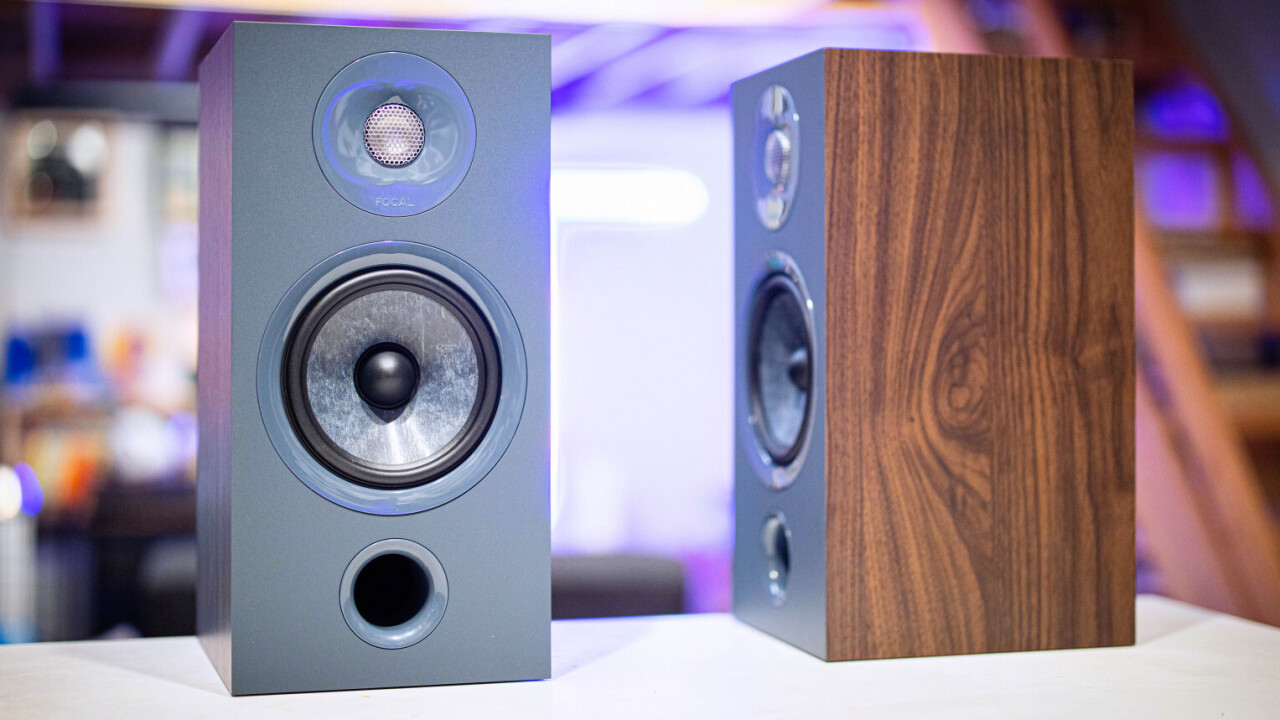 French audio company Focal has been in the hi-fi business since 1979, making everything from car speakers, to studio monitors, to surround systems. Nowadays, it’s perhaps best known for its high-end products with eye-searing price tags. Whether we’re talking about the excellent $3,000 Stellia headphones or the $230,000, costs-as-much-as-a-house Grande Utopia Evo, these products are out of reach for the average audio enthusiast.

But just because Focal’s pricey items are its most conspicuous doesn’t mean the company can’t make an excellent pair of speakers at a palatable price point. Case in point: I’ve been listening to the Chora 806, the company’s newest bookshelf speaker, and have found it to be a superlative entry in a crowded price bracket. For $1,000 a pair in the US, the 806 is already a great deal, but it is a particular steal in Europe, where you can grab a pair for €600/£600.

Launched in September, the Chora line replaces Focal‘s Chorus family as the company’s most affordable speakers. This wasn’t a simple refresh: it’s an all-new design, including a fancy ‘Slatefiber’ woofer. This new material is comprised of non-woven, recycled carbon fibers embedded in a thermoplastic polymer. According to Focal, that means improved damping, rigidity, and lightness over the polyglass cone in its predecessor. Translation: it sounds better.

Like all of Focal’s hi-fi speakers, the Chora is relatively unique in that its cabinets and drivers are made right in France. The company invited me to visit its facilities over the summer for its 40th anniversary (disclaimer: Focal covered travel and accommodation, but I try to remain as objective as I can), and I have a separate piece coming about that tour and how Focal goes about creating its speakers. But for now, I’ll summarize: the fact the company hand-crafts even its entry-level speakers is a luxury you rarely get from products in the price bracket.

It provides a certain peace of mind. Of course, hand-made components and assembly don’t necessarily guarantee longevity, but it’s not often companies go through the trouble of making their products locally when labor is cheaper overseas. Focal instead chooses to produce its cabinets in a small town called Bourbon-Lancy in the Burgundy region of France – two hours away from Focal HQ in Saint-Etienne.

The company’s cabinet manufacturer had long been a staple of the town, and when Focal bought the facility in 2007 as it expanded its output, it decided to keep the local expertise rather than move the factory over to Saint-Etienne. Considering Focal’s reach, the facility is operated by a surprisingly small team of locals, many of them who’d been working in the cabinet factory for years.

It’s a similar story for Focal’s drivers. Rather than using off-the-shelf parts or teaming up with driver manufacturers, Focal instead makes its drivers in-house back in Saint-Etienne. This allows it to tweak and improve drivers in rapid succession, as well as customize each driver for the particular speaker it’s being used for – down to the coil windings. Where many companies will need to tweak circuits and cabinets to fit a particular combination of woofers and tweeters, Focal has more flexibility in adjusting the drivers themselves. The company claims the net effect is higher sensitivity, improved dynamics, and lower distortion than competitors.

Returning to the cabinets for a bit, the Chora comes in three colorways, including an inoffensive glossy black, a chic white-and-light-wood, and the driver-matching slate blue and dark-wood of my review unit (every speaker should come in blue, just sayin’). While the Chora’s sharp edges and faux-wood veneer wrapping do betray its price point, I dig the look. It should be easy to match the speakers to just about any kind of decor, which is a good thing, considering the Chora is on the large side for a bookshelf speaker.

So no, the Chora doesn’t feel as premium as the Focal Kanta I reviewed earlier in the year, but well, it also doesn’t cost $12,000. For $1,000 it’s one classy-looking speaker.

Play some music through the Chora and thoughts of price point disappear: these are good-sounding speakers, period. As with every Focal product I’ve tried – headphones and speakers alike – the Chora’s dynamics immediately stood out. Having come from the much larger JBL L100 Classic prior to these, I expected a bigger downgrade in this regard (bigger speakers tend to be better at dynamics).

Played through a Yamaha RX-A3080 receiver and powered by a pair of Emotiva Stealth PA-1 amps, the Chora handle transients in drum lines with a snappiness that felt authentic. Timbre and tonality were impressively neutral; vocals that struck me as particularly well-rendered. There is perhaps a slight edge to the treble, giving the Chora a bit of a ‘crisp’ presentation, but it’s a subtle thing.

No one will mistake these for sounding ‘soft,’ overly ‘warm,’ or ‘laid-back.’ These are not qualities I typically hear in live music, so I don’t expect my speakers to impart them upon recordings.

The Chora also presents a wide, expansive soundstage that seems to emerge from beyond the boundaries of the speakers. I’ve previously felt some Focal products have a smaller soundstage, but not so with the Chora. My impression is that of an enveloping presentation and a wide sweet spot, meaning you needn’t be exactly in the center of the two speakers for realistic tonality.

Bass presentation feels judiciously balanced in my room, with a taught response and a nice amount of kick – none of that mushiness you sometimes get with bookshelf speakers. That said, it’s worth noting bass extension is not particularly remarkable for the speaker‘s size, at least compared to some of some recent competitors. Focal rates the Chora 806 as extending down to 49Hz(-6dB). The similarly-sized KEF R3 reaches all the way down 38Hz, and the noticeably smaller Buchardt S400 goes almost as low as the KEFs.

Then again, both of those speakers are roughly twice as expensive as the Chora (depending on where you’re located), and it’s worth remembering bass extension is easily addressed with a subwoofer. You could add an SVS SB-1000 subwoofer to the Chora for 500 bucks, for example, and achieve get full-range sound while still saving on the competition. Alternatively, you could opt for the larger Chora 816 ($1,600 a pair) or 826 ($2,000 a pair) towers, although I personally always prefer the bookshelf+sub combo.

Throughout my testing period, I felt the Chora punched above its price class. In brief comparisons, I found it had less bass and a slightly less focused soundstage than Buchardt’s excellent $1,800 S400, but it provided a more enveloping sound, with a more forward midrange and arguably better dynamics. The $4,000 Bowers and Wilkins Formation Duo handily beats the Chora on bass – active speakers typically have an advantage in this regard – but I preferred the latter for just about everything else. Again, a subwoofer is your friend.

The above are my listening-only impressions, but measurements can tell you a lot of a speaker without the influence of my biases and quirks of my particular setup. Luckily, the measurements seem to largely back up what I’ve been hearing.

Though speaker companies sometimes like to create a ‘house sound’ by tweaking a speaker‘s frequency response, research tells us the vast majority of people prefer a speaker that shows a flat frequency response when measured in an anechoic chamber. But because much of the sound we hear in a normal room is actually reflected from the walls, it’s also important that the speaker‘s sound changes smoothly as you move away from the primary listening axis; the sound the speaker radiates to its sides will affect its tonal balance.

I don’t have an anechoic chamber, so instead, I use an established technique that emulates one by removing room reflections from recorded data. It’s not perfect, but it should be fairly representative of the speaker‘s performance.

First, let’s take a look at the speaker‘s horizontal frequency response. The grey curve at the bottom is the most important single line, as it’s an average of the sound radiating within a ±30-degree horizontal and ±10-degree vertical “listening window.” This is most representative of the direct sound you’ll hear in a typical seating position, as we don’t usually sit 100 percent still. The colored lines above represent how the speaker‘s sound changes off to its sides in 15-degree increments:

Right away, we see the Chora impresses in a few regards. For one, the listening window is superbly flat, especially for a passive speaker with no digital processing to ‘fix’ the sound. There is a slight downward trend, but this appears to be balanced by the off-axis sound.

Off the sides, we see the speaker does not change much in level and maintains a relatively flat response even as far at 75-degrees to the side. Lesser speakers will tend to exhibit a dip where the woofer hands off frequencies to the tweeter (AKA the crossover). That happens around 3,000 Hz on the Chora, yet no dip is apparent.

It’s an impressively wide and even performance for a speaker at this price point, and it implies the Chora will have an expansive soundstage. It also means music should sound good even if you’re not sitting in the exact sweet spot. That said, you will want to ‘toe-in’ the speakers towards your ears for the best sound, as the response above 10 kHz drops precipitously beyond 15 degrees off-axis or so.

For comparison, check out my measurements of the KEF R3. That speaker also has an even response off-axis response, however, the sound drops lower towards the speaker’s sides. That typically means a narrower soundstage and sweet spot, although the image might appear more focused. I generally prefer a more expansive soundstage, but your mileage may vary.

Unfortunately, the Chora is less impressive in the vertical plane. You can see a large dip in the frequency response begin to form as soon as you move a few degrees above or below the tweeter. Granted, a dip forms on almost every speaker with its tweeter and woofer in a vertical arrangement, but the Chora controls this dip less than some high-end speakers.

Luckily, the vertical response does not typically affect our perception of sound as much as the horizontal, as long as the overall sound remains fairly balanced. I did not find this dip to be particularly audible. Still, these measurements do imply you should make sure the Chora’s tweeter is at the right height and angle relative to your listening position.

Ultimately, the Chora 806’s caveats are few: you’ll want to take some care in positioning them, and you might want a subwoofer to reach the deepest bass. But those relatively common issues aside, there’s very little not to like about the Chora.

It’s beautifully designed, feels well built, and comes from a reputable company. It sounds fantastic with a transparent, neutral tonality, a wide soundstage, and dynamics to get your toes tapping. The Chora readily competes with some of the most popular speakers in the $1,500+ price bracket; that it costs just $1000/€600 is icing on the cake.

This post includes affiliate links to products that you can buy online. If you purchase them through our links, TNW gets a small cut of the revenue at no extra cost to you. If you’d like to support us, you can purchase the Focal Chora 806 for $1,000 here.