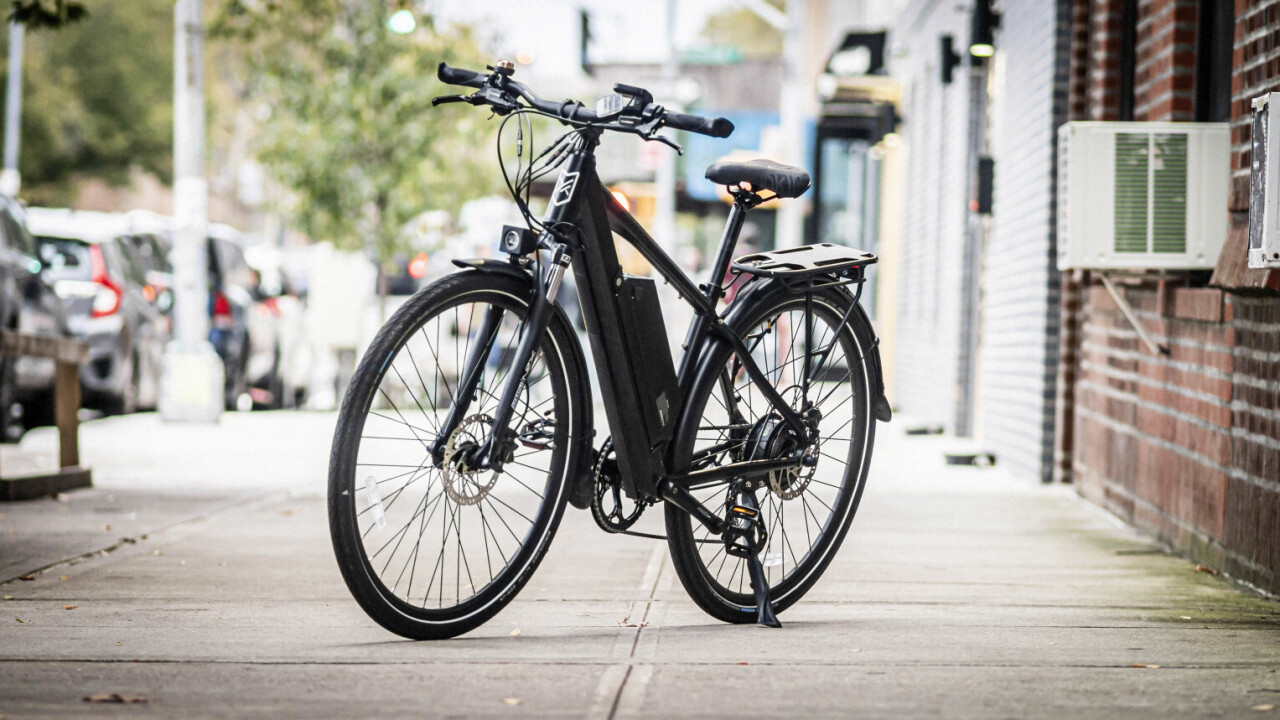 I am convinced personal electric vehicles like e-bikes and e-scooters are the best way to get around a crowded metropolis like New York City. No vehicle has convinced me more than the Juiced Bikes CrossCurrent X.

This $2,500 e-bike is a standout commuter vehicle, checking off a formidable list of features at a price that won’t break the bank – at least relative to other e-bikes with similar features, which can easily venture past four grand. 28+ mph adjustable top speed? Check. Real-world range of 70 miles for an average rider? Check. Ultra-durable tires? Check. Both smooth pedal assist and throttle operation? Check. A sturdy rear rack, front suspension, hydraulic brakes, a bright integrated headlight? Check.

For a well-rounded commuter bike — and short of building your own DIY e-bike — you’d likely have to spend a lot more money to beat what the CCX offers.

Juiced Bikes is a California-based company that’s been making e-bikes since 2011. As an internet-direct company, you probably won’t get the same personal attention you might have with a bike from a local dealer, and processing warranty claims or getting parts for repair can take longer. The company also only ships to the contiguous US, so you’d have to use an expensive forwarding service elsewhere. Nonetheless, Juiced provides some of the best specs per dollar in the country, so it’s no surprise it’s one of the most popular online e-bike retailers here.

The CCX actually stands out a bit from the rest of Juiced’s models. While most of the company’s other e-bikes, such as the moped-style Scorpion, feature trendy and cushy fat tires, the Juiced CCX is the company’s flagship ‘normal’ e-bike. Replace the massive battery with a normal downtube, and it’d just look like a fancy bike.

It’s equipped stock with 28 x 1.75 inch (700c x 45c) Schwalbe Marathon Plus tires, known to be among the very best at repelling flats. There’s a 9-speed Shimano Cassette drivetrain, the metal Wellgo pedals have a nice amount of grip to them, and the Tektro hydraulic disc brakes need just a light squeeze to stop this 270lb rider on a dime.

The bike comes in three frame sizes rated for users from 5′ 4″ to 6′ 4+,” each available in matte black, glossy red, or brushed aluminum. I tested the smallest ‘medium’ frame meant for users 5′ 4″ to 6′ 0″; I’m six feet tall, but I wanted to let my other half give it a go as well. I found the CCX required a moderate riding position that puts your weight slightly forward, for which I appreciated the chunky ergo grips, front suspension fork, and comfy Selle Royal Lookin saddle (too small for me, but among the comfiest stock saddles I’ve tried). A sturdy rear rack and fenders complete the package, though I wish Juiced offered a front basket option like many competitors.

Of course, it’s the e-bike components that stand out. The bike features a 750W custom Bafang motor, which is at the legal limit for public roads in the US. This motor actually allows the bike to go a little over 30 mph on a flat road in its de-limited ‘race mode’ with some pedal assist, but by default, it’s configured to the federal limit of 28mph (most other e-bikes are limited to 20mph). That said, you can easily adjust that limit in the display’s menu to fit your local ordinances (25mph in NYC, 20mph in much of the country).

All this makes for a bike that is a veritable blast to ride. The difference between 20 mph and 28 is greater than you might think – it’s often the difference between being able to keep up with cars or be at their mercy. Though most of my time was spent riding around a comfortable 18 mph – still more than enough to zip past cars stuck in traffic – the extra speed actually helped me feel safer when the cars around me sped up. It’s also nice to not feel like I’m holding up the cars behind me.

Notably, the CCX is equipped with both torque and cadence sensors, making for smoother pedaling than cadence-only systems. If you don’t know what those words mean, Juiced has an explainer here. Basically, a cadence sensor is like a pedal-powered on/off switch for the motor, providing a fixed amount of power based on your assist level once it detects you’re pedaling. A torque sensor, on the other hand, actually adjusts power depending on how hard you’re pedaling. It will provide more power from a dead stop or up a hill than while cruising along a straightaway.

That can mean a significantly more enjoyable ride. To make a crude analogy, a cadence sensor feels like riding a bike with a rocket that turns on whenever you start pedaling. You feel like you’re being pushed along; it makes the ride easier, but you don’t feel totally in control of that speed. A torque sensor feels a lot more like riding a regular bike, except you’ve never skipped leg day and can suddenly squat 1,600 pounds.

There are six assist levels: Eco, 1, 2, 3, ‘Sport,’ and the de-limited and sparsely legal ‘Race’-mode. Despite being a heavy rider, I spent most of my time using assist levels 1 and 2.

Eco feels like riding a lighter bike in a tailwind – a small boost to make that makes your ride just a smidge easier. It’s great for those long leisurely rides where you want to conserve battery.

Level 1 already makes it easy to pass most other cyclists on the road, and I can already hit the 28mph limit in mode 2 if I pedal hard enough. Level 3 is bordering on overkill for stop-and-go city riding unless you absolutely do not want to break a sweat, but it’s handy for getting around fast outside the city. I pretty much only used Sport mode when I wanted to get somewhere as fast as possible with minimal effort – or was letting my inner speed demon take over.

But even in assist level 2, I found I could regularly beat Google Maps’ travel time estimates for both subways and cars going almost anywhere throughout Brooklyn, Manhattan, and Queens. This had the effect of making me want to go out more, and means I’m taking longer trips I might’ve avoided with public transportation.

Side note: Lest you roll your eyes at e-bikes making people lazy, it seems people riding e-bikes actually burn more calories overall. A recent study involving 10,000 riders showed that while e-bike riders may use fewer calories per given mileage, they typically ride further. This has been the case for me. With the CCX and other e-bikes I’ve been testing, I almost never take the subway or a cab anymore – what used to be passive trips have become active ones. Often, I’ll bike to a meeting using a high assist level to avoid sweating, then return home with little to no assistance to get a better workout. E-bikes give you options.

That said, having a throttle (limited to 20 mph) does come in handy for those times I’m too tired or don’t want to risk breaking a sweat. Mostly though, I found it useful to achieve maximum power at any given moment, such as using the throttle in conjunction with the pedals to accelerate quickly from a dead stop at a red light.

The rest of the bike makes for a good ride too, with reliable braking on a dime, an integrated bell, a headlight that’s actually bright enough to see as well as be seen, and front suspension to smooth out the ride. You’ll still want to get off the seat to avoid the big potholes though. Or you can add a suspension seatpost; I found the $60 Satori Animaris gave me all the suspension I needed for city use.

But the best part of the CCX is definitely its massive 52-volt, 19.2 amp-hour battery. Multiply these two numbers together and you get 998 watt-hours, a value that essentially determines the battery’s range. That’s far higher than the vast majority of competitors, which typically come in at about 500 watt-hours. In other words: The CCX will take you further than almost anything else on a single battery.

Of course, range is directly tied to the bike‘s payload; companies usually use lightweight riders for their range estimates, so at 270lb (not to mention an extra 10 pounds or so in gear) I’m used to getting far less range than most vehicles claim. Still, I consistently managed to get anywhere from 45-60 miles on a charge with the CCX when aiming for about 16-18 mph in assist levels 1 and 2 – about twice as much as I’ve gotten with other e-bikes.

If you weigh 200 pounds or less, chances are Juiced’s 70+ mile claim is well within reach. Moreover, the company actually has a real-world range chart that gives you an idea of how far 190 lb rider could go depending on their speed. Here’s the section describing the CCX’s range on assist level 3:

So a rider might only get 57 miles if riding at a continuous 20 mph. On the other hand, decrease your speed to 10 mph for a long, leisurely joyride, and you could achieve a whopping 168 miles. These figures would presumably be even higher by using the lower assist modes or with still lighter riders. And unlike e-scooters, e-bikes like the CCX are generally still very rideable if the battery does run out (I even taught a friend how to ride a bike on the CCX with the battery removed).

As a subtle bonus, the big battery means you can charge to 80 percent while still beating most of the competition on range. Why would you want to do that? Longevity is the answer: never fully charging nor depleting the battery means less strain on the cells and can significantly increase its power retention over the years.

Not everything is peachy though. To sum up a list of caveats:

And of course, no bike can accommodate everyone’s needs. If you expect to haul a lot of cargo often or want to bring along a passenger, the RadRunner I recently reviewed is a more versatile bike; it’s much cheaper too, starting at $1,299 and has a better accessory system. If you want something that’s fun to ride and folds for easy storage or to bring on a car, the Oyama E8D Mark II I’m testing is worth considering too. There are a myriad of other options for every kind of use case.

But as far as well-rounded commuter bikes go, Juiced does a whole lot right with the CCX. It’s super fast, it’s a joy to ride, and it has ridiculous range. It will also probably never get a flat, features a solid set of components, and looks good – in a traditional sort of way – to boot.

Above all, it’s convinced me to bike just about everywhere I can. I’ll live a healthier, more eco-friendly life for it – and get around this city faster to boot. If speed, range, and fun are your priority, you’ll have a tough time finding an e-bike that offers as much as the CCX at its $2,500 price or beyond.

The CrossCurrent X is available to purchase from Juiced Bikes for $2,499. For the $1,7999, the CrossCurrent S2 offers most of the same features but with a smaller battery and different tires.