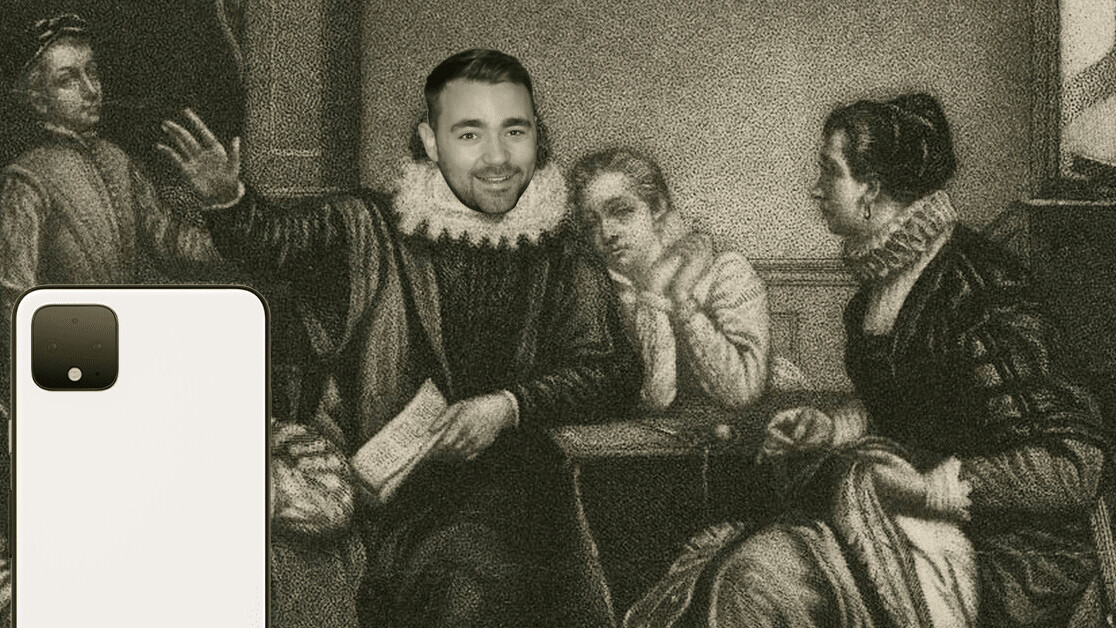 It’s been a couple of weeks since the launch of the Pixel 4. We got our hands on one, and have a full review and video in the pipeline, but we wanted to get some thoughts down before then. In a… different way.

This then, is the acrostic review of the Pixel 4. What’s that? Well, when the first letter of each paragraph will form its OWN REVIEW BY THE END OF THE PIECE. See if you can unravel our tricky, brain-rending riddle. Good luck, friends, good luck.

I think the first thing that struck me about the Pixel 4 is the design. It’s a beautiful looking phone. I’m a big fan of the camera square on the back of the Pixel 4, as it looks so much slicker than the trio of lens holes on the rear of the iPhone 11 Pro range.

Something else I loved about the Pixel 4 was Google doubling down on its decision to murder the notch. This jutting bit of blackness is a horrendous chapter of phone design, and the quicker it dies, the better — especially when it was as bad as the Pixel 3. Good riddance.

Perhaps one of the most talked about elements of the Pixel 4 is motion sense. Basically, there are cameras and sensors on the front of the phone that can track hand movements and turn those into commands. You know, like swiping your hand to change tracks. Currently, this is a gimmick with no real use. But I’m hoping that’ll change.

Related to the Pixel 4’s front cameras is another new element of the phone: face unlocking. Compared to the iPhone, I’ve found the Pixel 4 to unlock quicker, and work better in low light environments. The issue is that it’s nowhere near as secure, with Google allowing your phone to unlocked with your eyes closed by default.

Even though the face unlocking feature is good, I really miss the fingerprint scanner. That was so much quicker and more reliable than this face-scanning nonsense. Plus, loads of Android apps don’t support Google’s face unlock yet, which makes it far less useful than the iPhone.

The photography is probably the part of the Pixel 4 I’ve probably enjoyed the most. We’ll be running more in-depth pieces on this in the coming weeks, but it really produces some gorgeous shots, with minimal work needed from the photographer.

The particularly exciting thing is the Pixel 4’s photographs are only going to get better, as much of the heavy lifting is done by software, rather than hardware. So, in six months time, the already impressive results might be even better. Which is terrifyingly cool.

Yet, not everything is rosy. Let’s talk about the battery. Google actually reduced the capacity of the Pixel 4 compared to the Pixel 3. Which — and to put this lightly — is absolutely fucking insane. At the moment it’s just fine, lasting me about a day of use. But the amount of time you’ll get out of that will drop over time because, you know, batteries. Honestly, I don’t understand what Google was thinking here.

Generally, the Pixel 4 feels like a premium phone. But… there’s something about it that doesn’t quite match the price tag. The base model comes in at $799, the same price range you can get souped-up flagships from a company like Huawei. Which, specs-wise, run rings around the Pixel 4. I know you could level the same accusation at Apple’s iPhones, but there’s something about them that feels more premium. They’re weightier, feel more robust, and — importantly — have an air of prestige the Pixel doesn’t quite have. Yet.

Of course — and despite this — the Pixel 4 is still a damn good phone. It has the cleanest (and best) version of Android around, and, OS-wise, is probably the best future-proofed phone you can get (because Google will keep offering updates for it for some time). And although I might pick an iPhone over the Pixel 4, I can’t really think of an Android device I’d prefer to use day-to-day.

On the other hand, I’ve said before that Google’s “a” range of budget phones are the best hardware fit for the company, and I’m excited to see how this pans out with the 4a. But, that doesn’t take anything away from the Pixel 4 currently: it’s a good phone, that’s well designed, but has one too many flaws for it to sit alone at the top of the Android tree — even though it’s pretty close.

Did you like this acrostic review? Do you feel like you’ve read TWO WHOLE articles at once? Like you’re now a brain genius? Same, buddy, same.