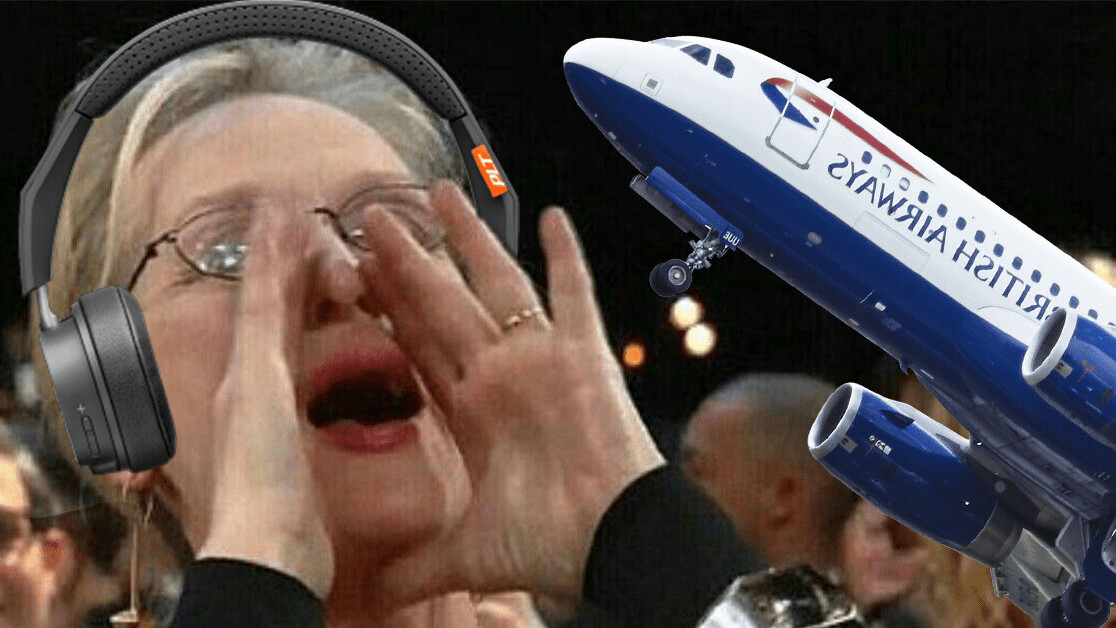 The more I think about it, the weirder it gets that I never used active noise-canceling headphones (ANC) on a flight.

I mean, I review tech for a living for god’s sake. I’ve tried out a raft of noise-canceling cans. I’m pretty sure I’ve event been on flights with ANC headphones. But, for some cursed reason, I never actually turned on noise-canceling features during a flight.

Until last week. And lord, my life has been altered forever.

Generally, they work by having a series of microphones on the headphones that analyze and neutralize the ambient sound. They basically invert the sound waves that are entering your ears, meaning the noise is literally… canceled.

I’ve had a pretty mixed response to noise-canceling headphones in the past — probably because of my completely unrealistic expectations. When I first heard about the technology, I assumed it’d be like that bit in the Ben Affleck Daredevil movie (yes, I made that reference) where he sleeps in a water coffin thing in order to escape the cacophony of the world. I could picture it: I’d slip my ANC headphones on, and would be safe in a world free from banal conversations about people’s kids.

Instead of pure, unbridled silence, ANC headphones tend to muffle and dampen my environment. Yes, everything’s quieter, but you can still catch what people are saying. Which is a shitter.

Without getting too bogged down in details, this happens because of frequencies. ANC headphone technology functions up to sounds with frequencies of 1,000Hz, but works best on those under 500Hz.

And, irritatingly, the human voice’s intelligibility range goes from about 500Hz to 4,000Hz — explaining why those tinny voices seem to echo around your expensive ANC headphones.

Here’s the kicker though: most engine noise and vehicle sound occurs under 500Hz, something ANC headphones are adept at eliminating. A fact that explains what can only be called my blessed airplane ANC revelation.

It happened unexpectedly. I was using the Master and Dynamic MW65 headphones on a journey to London. I wasn’t even aware that I had the noise-canceling function on as I boarded the plane and it took off.

Then, at some point on that flight, I realized something: I couldn’t hear the actual plane itself. And I could hear my music really well. And my phone wasn’t at top volume. Some magical fuckery was going down, I was sure of it. And, friends, it was.

I fiddled with the Master and Dynamic MW65 headphones, and turned off the noise-canceling function. The sound of the plane roared into a space where it previously wasn’t. I turned ANC back on and the clamor stopped. On. Off. On. Off. I felt like a noise-canceling god. And that felt great.

It wasn’t just that my music was so much clearer; everything felt better. I found the journey more relaxing, it was though I was in a glorious audio cocoon. Honestly, it fucking rocked.

So, let me say this: if you do any amount of flying, do yourself a favor and pick up a pair of noise-canceling headphones. You won’t regret it.

Well, luckily there are a whole load of us at TNW who can recommend you a great pair.

“These are the headphones I had my transcendental experience with. They’re expensive, but I’m already in love with the damn things.” — Callum

“I’m pretty happy with my pair of Sony WH-CH700N headphones. They’re relatively cheap and good quality. I find a lot of ANC headphones uncomfortable and a bit headache-inducing, but the ANC on my Sony pair is just right. They were a real life-saver on my trip to Seoul!” — Már

“These are the headphones you do a listening test with, and they then customize the sound they produce to your hearing. They’re amazing. And have active noise-canceling. If you want something different, these are for you.” — Callum

Get involved by clicking here.

“I like to pack light when I travel, and that means I generally restrict myself to a single pair of headphones. That’s when I reach for my trusty TaoTronics SoundSurge 46. They’re not up there in terms of audio fidelity like some of my other cans, but they’re comfortable enough to wear for hours, charge quickly, and offer pretty solid ANC that makes long flights bearable. They’re also fairly inexpensive and come with a durable case, so you don’t have to worry too much about wear and tear on the road.” — Abhi

Read our full review here and pop in this direction to simply buy the cans.

“The Jabra 85h are perhaps the most well-rounded pair of ANC cans I’ve ever used. The battery life is perhaps the most enduring of any headphones I’ve tested, while the noise cancelling is surprisingly effective. They’re comfortable and well-built, and sound amazing.” — Matt

There you go: not only did you get a life-changing recommendation about ANC headphones on flights, you also received selection of the best noise-canceling cans about. What a life.