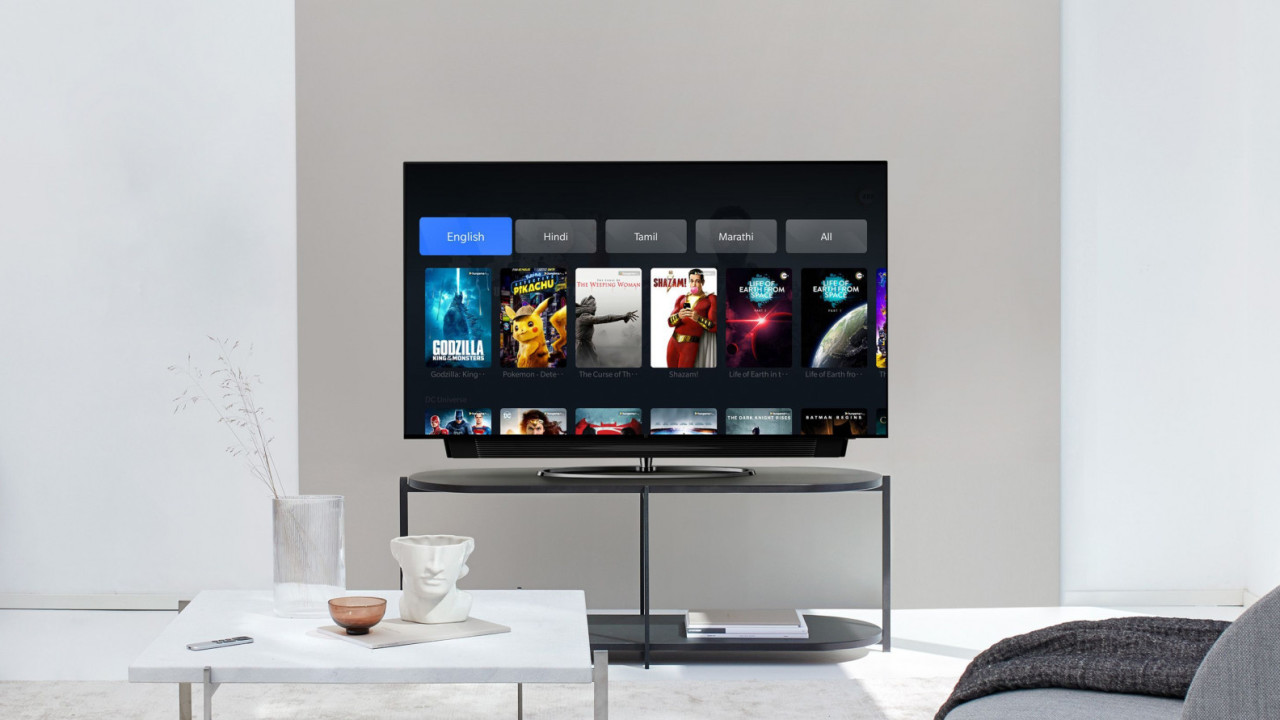 OnePlus unveiled its most ambitious new product — a smart TV — to great fanfare in India a couple of weeks ago, after hyping the product for months beforehand. The company made a name for itself with a slew of well designed and thoughtfully appointed smartphones, and I was hoping to see that sort of thinking applied to a TV — so I was only too happy to test the 55 Q1 Pro over the past few days.

Besides featuring a QLED screen, a minimalist remote control, and a mechanized soundbar that slides into place beneath the screen when it’s turned out, the 55-inch Q1 Pro comes with Android TV on board (based on Android Pie 9.0), as well as OnePlus’ own content discovery service.

It’s also surprisingly expensive for the Indian market, which has recently seen a flood of competitively priced smart TVs from several Asian brands. And OnePlus hasn’t yet said if it’ll make its TVs available elsewhere. So, here’s my take on the company’s foray into home entertainment, in the form of the $1,408 (Rs. 99,900) 55 Q1 Pro.

I should note that we’ve used OnePlus‘ photos for this review instead of my own, as it was near impossible on my limited schedule to shoot pictures in my living room without my own existing TV messing things up.

The Q1 Pro seems designed to blend into any home, with a narrow bezel around the display, and an oval polished metallic stand. It looks elegant, and this shape allows for placing the TV on a console or table that’s smaller than the width of the screen. However, it doesn’t help you hide your cables as they snake from multitude of ports on the TV’s rear – unlike some other well designed stands from LG’s stable.

There are a couple of neat design flourishes, like the carbon fiber-patterned rear, the ports section on the rear that’s concealed with a pattern-matched removable panel, and the mechanized soundbar. The latter is hidden from view when the TV’s turned off, and slides down when you turn it on. It lights up too, and pulses to the beat of music that you play on the speakers over Bluetooth.

The Bluetooth remote is well designed, with a compact form factor, and just a handful of buttons to navigate the Android TV interface. You can also speak into it to issue commands via Google Assistant, and charge it through its USB-C port.

The Q1 TVs feature mostly stock Android TV, with a couple of little customizations. The big one is called OxygenPlay, and it’s essentially a one-stop destination for browsing content available across all your subscribed streaming services. At present, a bunch of local offerings like Amazon Prime Video, Eros Now, Hungama, Jio Cinema, and Zee 5 are supported – and when you tap on a movie or show in there, it’ll fire that right up. If you’ve tried a Xiaomi Mi TV in India, you’ll find this similar to the company’s PatchWall software.

This works well enough, but my main issue with the interface is text input: as with many other smart TVs, you’ve got to fiddle with a D-pad to find letters on an on-screen keyboard. Now, you can use voice commands with Google Assistant, and there’s a sort of ‘universal search’ tool in one section of the interface – but neither of these work well, and I usually got far worse results than if I’d used the more painful on-screen keyboard.

OnePlus has customized the screensaver so it brings up pictures shot by other users of its phones, when the TV is idle. You can also connect your phone or tablet to the TV to use as a Bluetooth speaker; when connected , the lights on the soundbar glow in time to the beat. I still don’t know how I feel about that, but at least it’s not some gross visual assault of cycling RGB colors.

The Q1 Pro has Chromecast functionality built in, so you can beam content from your phone to your TV just as you would with Google’s hardware dongle plugged in. This works as expected, but I’ve noticed that performance sometimes suffers when compared to running the same content using locally installed apps – such as 4K YouTube videos.

There’s another feature I like a lot more than I’d care for: the TV turns down the volume automatically when you receive a call on your phone (which has the Connect remote app installed).

I wish the company added more quality-of-life tweaks like this to the package, so as to make this TV feel less like just another one you can grab at the store and more like a well thought-out OnePlus product. The company hasn’t included farfield mics – which would pick up voice commands with a wake word from anywhere in the room – though there’s a slot for them at the top of the TV, and the Q1 Pro doesn’t support Apple’s AirPlay 2.

Living with the Q1 Pro

This TV is certainly capable of delivering a good viewing experience, thanks to its QLED panel and support for standards like HDR10+ and Dolby Vision. However, since it’s a VA panel, its viewing angles aren’t great. That means that if you’re sitting about three full-size couch seats away from the center of the TV, on-screen colors will seem a bit off, and that’s particularly noticeable in skin tones. However, it’s not so bad as to be deemed unwatchable.

The on-board processor and graphics chip are generally good at keeping navigation fluid and mostly painless – but at times, firing up apps took a little longer than I’d like, and launching content can cause video to skip a frame or two for a bit. The same thing happens with some 4K video, like high-res clips on YouTube, and I noticed lags across the entire lengths of videos — as opposed to only during the first few seconds like with a Chromecast dongle. I’d have liked to have seen OnePlus tackle this sort of thing, given its ‘Never Settle’ ethos.

Next, OnePlus chose to apply some poorly chosen picture settings to the default mode, so you’ll be subject to oversaturated colors and unnaturally smooth motion. One aggressive HDR setting made some Amazon Prime Video shows practically unwatchable, but this has been resolved in a recent software update.

Not having Netflix at launch has proved to a real bummer, particularly because we don’t know exactly when support for the service will become available.

As for picture quality, it’s a bit of a mixed bag. I switched from OnePlus’ silly overblown settings to ‘Film’ before I got going, and things went well after that. Colors are rich and vibrant, contrast is solid, and the panel is capable of getting plenty bright. However, you’ll want to tweak the settings to suit your room and lighting before settling in for your first binge. The edges are a tad darker than the rest of the screen, but this didn’t prove to be a major issue while watching films and shows.

Unlike most TVs, the Q1 Pro is actually a winner in the audio department, thanks to the well designed sliding soundbar. There are four full range speakers, two tweeters for highs, and two 10W woofers for bass output. I generally pooh-pooh in-built sound systems on TVs, but this one is seriously capable, to the point that I usually don’t feel the need to fire up my external soundbar and other speaker sets that are hooked up in my living room, whether I’m listening to music or watching an action movie packed with explosions and dramatic dialogue.

If you’re in a small living room like mine that accommodates about five or six people, it’s adequate. But if you’re setting this up in a larger space, you might want to consider additional firepower. Still, props to OnePlus for delivering pretty darn solid speakers into a TV — something most other manufacturers haven’t managed in years.

Playing games on the Q1 Pro, with my laptop hooked up via HDMI, was an absolute treat. When photorealistic lighting isn’t absolutely necessary, the TV is great for blasting through titles like Control, GRIP, and No Man’s Sky. However, you’re limited to 60 fps. That’s enough for smooth gameplay, but it’s not on par with the smoothness of dedicated gaming monitors that support higher frame rates, or some new high-end TVs from LG.

Now for some harsher words: while OnePlus has proved it can build a pretty good TV, it hasn’t brought its A-game on the software front. It’s not terrible, but it lacks that OnePlus touch, in the form of a suite of thoughtful features.

The Q1 Pro’s Achilles’ Heel is pricing. At Rs. 99,900 ($1,408), it’s closer to premium 4K smart TVs from heavy hitters known for outstanding picture quality and finish like LG, Sony, and Samsung. However, its panel isn’t on par with sets at this range; it’s more easily comparable to TVs from TCL and Xiaomi, which are more focused on features than pure image fidelity. Those competing products are far cheaper, and it seems like OnePlus has slapped on too hefty a price tag on its good-but-not-incredible TV.

And while the soundbar on the Pro is nice, it costs Rs. 30,000 ($420) more than than the model with four fewer speakers. For half that price difference, you can pick up an external soundbar that will blow the Pro’s speakers out of the water.

So, at Rs. 99,900, the OnePlus TV is hard to recommend. But if you’re good with the feature set, and like the idea of a capable built-in soundbar, this is a an enjoyable piece of kit.