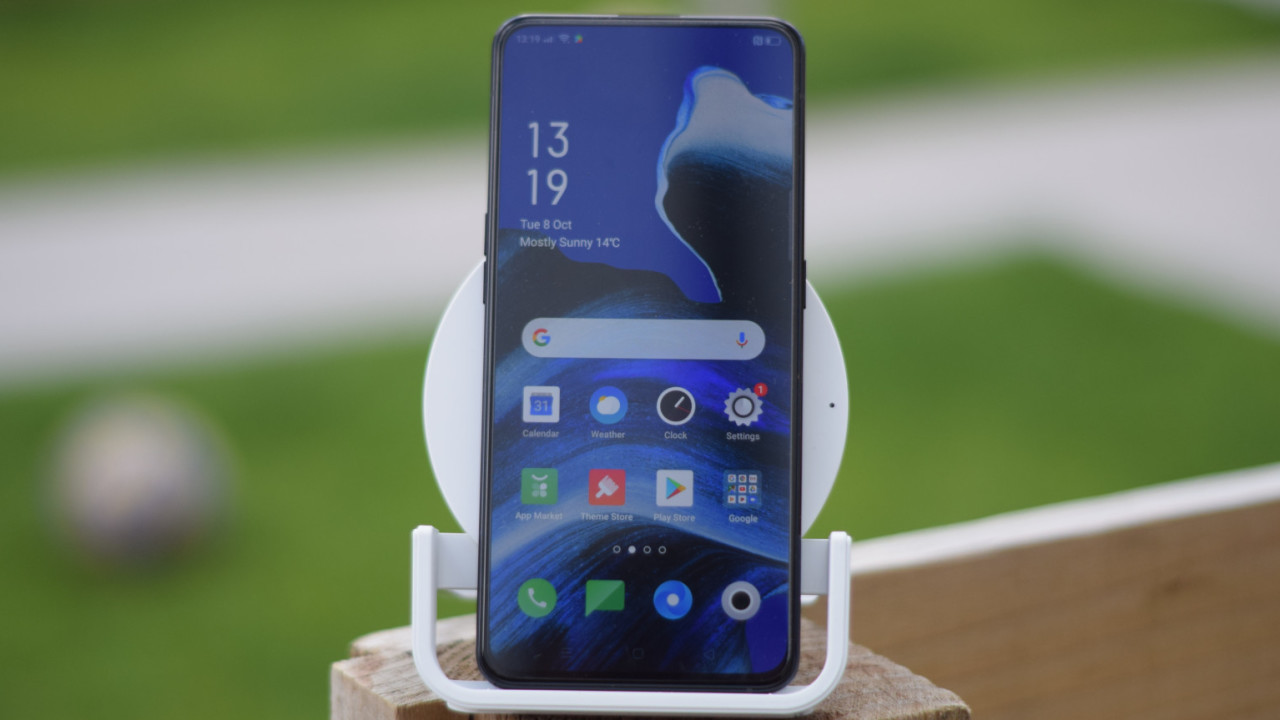 After proving itself in the cut-throat Asian handset markets, Chinese smartphone maker OPPO is defiantly marching its way to prominence in the West. If the OPPO Reno 2 is anything to go by, it won’t have to march very far, thanks to a flagship handset that exquisitely balances poise with performance to create a great-value all-rounder.

The Reno 2 is primarily a marriage of style and substance. Under the hood, you’ll find everything you’d expect from an upper-midrange flagship phone, which is augmented by design elements that elevate this handset spectacularly. These include a selfie-camera that’s hidden within the body of the phone, plus a polished Android experience courtesy of Color OS 6.1.

Before we delve into the phone itself, let’s chat about the hardware that powers this handset. It’s a bit of a weird one. Some specs are unambiguously high-end, like the phone’s four-camera constellation, or the generous amount of RAM it includes. But there are also a couple of compromises along the way. These push the Reno 2 out of the high-end sphere into what you’d reasonably consider to be an upper-midrange handset.

Before we find ourselves too deep in the technical weeds, let’s talk about what the Reno 2 is packing:

Perhaps the most eye-catching thing here is the inclusion of Qualcomm’s mid-range silicon. In fairness, the 730G is no slouch. It uses an 8nm manufacturing process, which offers improved battery life and performance. It also features visible improvements in the chipset’s ability to handle AI tasks, as well as support for Wi-Fi 6.

Sleek in all the right places

Despite a heavy marketing push (this year alone, OPPO sponsored the UK Cricket World Cup, as well as the Wimbledon tennis tournament), OPPO isn’t quite yet a household name in the West. Could the Reno 2 be the device that raises its profile into the stratosphere?

I want to think so, and if it happens, it’ll be because OPPO has created a fundamentally aspirational device in the Reno 2.

The front of the phone is an unbroken panel of screen, with no cameras or notches to intrude. The display is bright and crisp, with excellent viewing angles and faithful color reproduction.

Black tones are precise and well-defined, whites are bright and perfect, while the rest of the color gamut is expressive and lovely. These attributes make the handset well-suited for long Netflix binges, and the vibrancy of the screen allows you to effortlessly immerse yourself in shows like Planet Earth and Blue Planet.

At the bottom of the device, you’ll find the USB-C charging port, as well as a solitary speaker and a 3.5mm headphone jack. The latter is particularly welcome, especially given that in 2019, headphone sockets are somewhat of an endangered species. The speaker, while not the loudest we’ve ever heard, is adequate, with little distortion and solid clarity.

The rear of the device is understated. Unlike the iPhone 11 and Huawei P30 Pro, the constellation of cameras is buried within the device, giving it a very flat profile. The solitary splash of color comes from a strip of blue surrounding the OPPO logo.

And then we get to the software. On the Reno 2, OPPO bundles Android 9.0 Pie with its own skin, called Color OS 6.1. I’m usually cynical about third-party skins because they quite often get in the way of the default Android experience, which has improved markedly over the past decade or so.

That said, Color OS 6.1 isn’t too bad, offering a reasonably uncluttered experience, with buttery-smooth animations. My biggest complaint is the level of pre-installed software that comes with the device, which feels overwhelming. The unit provided to TNW came with OPPO’s app store, a theme marketplace, the Opera web browser, and several random social media apps, including WeSing and Soloop.

The standout feature of the OPPO Reno 2 is undoubtedly the camera, which produces detailed and vibrant shots, even under challenging conditions. The camera app itself is somewhat pared back, especially compared to Huawei’s offering, which heavily emphasizes the bells and whistles.

The portrait mode on the Reno 2 is one of the best I’ve used so far. It’s capable of producing some gorgeously soft backgrounds, while still ensuring that the subject of the photo looks sharp and defined, with accurate skin tones and plenty of detail.

The Reno 2 is also excellent at photographing the world around you, capturing images with exquisite detail and vibrancy. Although the camera app does occasionally optimize settings based on the subject (like, for example, taking a photo of a plate of spaghetti will get the Reno 2’s camera to switch to “food” mode), the AI optimizations are less intrusive than those offered by Huawei.

The front-facing camera pops up on a mechanical “pizza slice.” While I couldn’t fault the overall quality, my biggest qualm was with the fact that it takes a second or so for it to get into place, which makes it a tricky proposition for those pictures where spontaneity is the order of the day.

Who is the OPPO Reno 2 for?

The OPPO Reno 2 is a great phone and ticks the majority of most people’s boxes. It has an excellent camera, which performs well during daylight and nighttime. It’s stylish and well-built. The front-facing camera, while slightly gimmicky, takes beautiful shots. The screen is vibrant and bright, and Color OS 6.1 is genuinely pleasant to use.

Ultimately, this is an excellent handset, and serves as a worthy alternative more expensive Android flagship devices, like the Huawei Mate 30 Pro and the Samsung Galaxy S10.

OPPO will launch the Reno 2 in Europe next week, when we’ll learn more about its UK and Eurozone pricing. It’s already on sale in India, where the top-tier model retails for 39,990 INR. We’d guess this handset will retail around the £500/€550 mark.

Keep an eye out for our full review later this month, where we’ll take a closer look at this excellent phone.