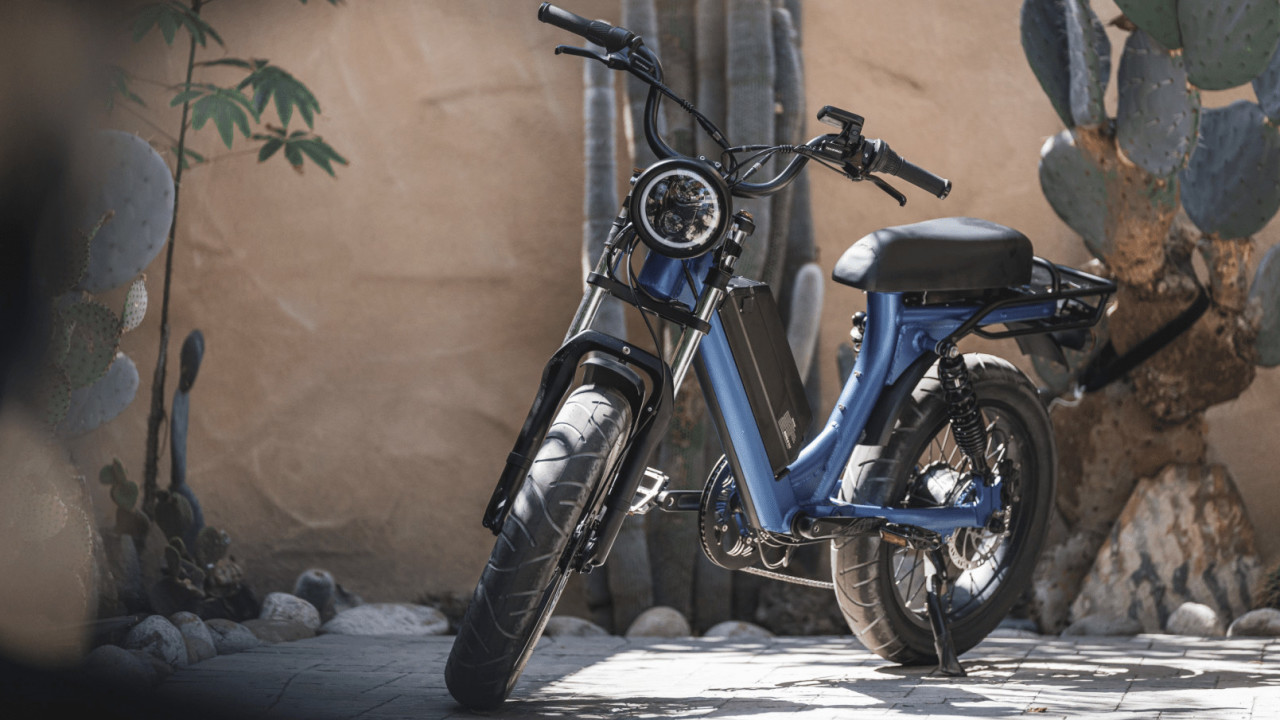 E-bikes can be roughly placed along two sides of a spectrum. On one end, you have models that are basically normal bicycles with motors, encouraging you to pedal while providing you with a boost when you need it. Others are more like modern mopeds, encouraging you to pump the throttle and cruise comfortably at city speeds.

The upcoming Scorpion by Juiced Bikes takes the ‘modern moped’ concept to heart. With a cushy seat, fat tires, dual suspension, and a massive headlamp, it’d be easy to mistake it for some newfangled motorcycle. With a sleek design and a top speed of 28mph – over 30mph on a ‘HyperScorpion configuration – it’s not too far off from one. Despite all this, it maintains a number of features that make it a decent pedal bike too.

Most importantly, the Scorpion just feels good to ride, as I attested to during a stroll around Manhattan’s Lower East Side.

The blue frame is particularly stunning, turning heads from onlookers and prompting a couple of compliments within the 30 minutes or so I spent with it. The large seat is fixed, but comfortable, and Juiced is working on a passenger kit so you can bring along a friend. And the Scorpion is actually smaller than you might assume from the photos; the 20-inch wheels mean the bike isn’t any longer than a typical commuter bike, at 67 inches.

But the best part is the dual suspension. Ebikes with rear suspension are rare, and even more so ones with a rear rack to mount pannier bags or other accessories. I hardly noticed the rough Manhattan pavement peppered with potholes, and despite weighing 270lb, the suspension didn’t bottom out. For comparison, the somewhat similar RadRunner from Rad Power Bikes also smooths out the ride with chunky tires, but the Scorpion’s suspension puts it on an altogether different level of comfort if you don’t have perfectly paved roads.

Then there’s the HyperScorpion, which is pretty much a slow motorcycle. This version largely looks the same, but includes a number of upgrades:

I imagine most people will be fine with the standard model, given almost no one needs to go above 28mph on a bike – again, it’s practically a motorcycle at that point – and few jurisdictions allow you to use a throttle above 20mph anyway.

But I expect many will go for the HyperScorpion simply for the extended range and torque sensor, the latter which provides a significantly more responsive pedaling experience. I wish Juiced provided an intermediate model that included these two upgrades without the extra speed and accessories of the HyperScorpion.

You could buy the 19.2 Ah battery separately – it’s the same one used in Juiced’s other models – but there isn’t currently an option to configure the base Scorpion with the bigger battery. Then again, the HyperScorpion’s Indiegogo price is the same as Juiced’s other models with a 19.2Ah battery and torque sensor, and even less for Early Birds. So at least for now, it’s something of a moot point.

The one area that will likely turn off more serious cyclists is the low, fixed seat. It may be cozy, but it means that unless you’re really short, you won’t be getting full leg extension during pedaling. For the sake of your knees, you probably aren’t going to want to pedal intensely for an extended period of time, which you’d need to do if you wanted to maximize range and speed. A fixed seat isn’t uncommon among e-bikes and the norm with mopeds, but I wish Juiced had figured out a way to adjust the seat height like on the RadRunner.

But then the Scorpion isn’t really aimed at people who want a normal bike. If you want something meant for serious pedaling, Juiced already has the CrossCurrent and RipCurrent series; aside from missing rear suspension, these offer very similar specs. As a modern electric moped that just happens to also be a bike, the Juiced Scorpion is a seriously compelling option.

You’ll have to be patient to get your hands on one though. The Juiced Scorpion is currently available for pre-order on Indiegogo starting at $1,299 and is expected to begin shipping in March of 2020. We’re normally wary of Indiegogo campaigns around these parts, but Juiced is a long-established company that’s delivered on past campaigns.

In the meantime, stay tuned for our review of Juiced’s CrossCurrent X later this week for an idea of the quality and components on offer.