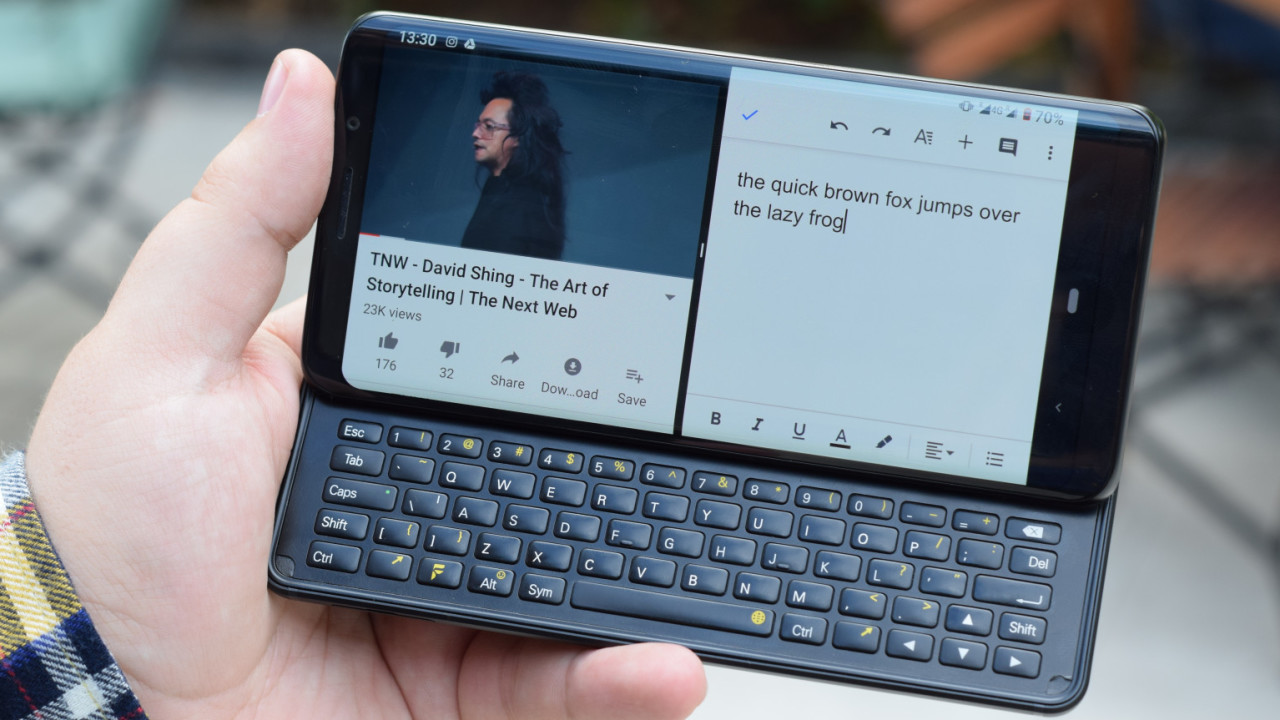 UK mobile startup F(x)tec today announced the upcoming availability of its inaugural handset, the F(x)tec Pro 1. This handset is a contemporary take on the old Nokia E7 slider phone, aimed at power users, as well as those for whom virtual keyboards aren’t good enough

At first glance, it resembles an ordinary (if not somewhat hefty) smartphone. Looks, however, are deceiving. Concealed within its chassis is a full QWERTY keyboard, which slides out with a push of one’s thumb. This gracefully snaps into place with a slick spring-loaded mechanism, allowing you to bang out emails and documents with relative ease.

F(x)tec will ship pre-orders of the F(x)tec Pro 1 in the middle of September, with general availability on October 1. Punters can buy it from F(x)tec’s website, as well through Amazon and selected high-street retailers, like Selfridges and Harrods. In the US, it’ll go for $699. In the UK and Eurozone, F(x)tec will sell the device for £649 and €649 respectively.

But is it worth your hard-earned money? We’re reserving our judgement until we get a device to thoroughly test, but first impressions are positive, particularly to this nostalgic BlackBerry enthusiast. TNW met with F(x)tec at Berlin’s IFA tech conference, where we got a brief hands-on with the quirky productivity-oriented blower.

The unique and slightly complicated design of the F(x)tex Pro 1 hasn’t come at the expense of actual internals, which are consistent with what you’d expect with a mid-to-high end phone. Here are the highlights:

The F(x)tec Pro 1 runs Android 9.0 pie. That’s not much of a surprise, given Android 10 only just (just!) came out, and is still gradually running out. As a nice surprise, F(x)tec has decided to release the handset with a completely unlocked bootloader, giving users the option to replace the ROM with one of their own choosing.

But is the keyboard any good?

The keyboard on the F(x)tec Pro 1 is an interesting beast. It’s also one that I’m not sure I’d be able to fairly assess until I get my hands on a loan unit for an extended period, which would give me an opportunity to build the muscle memory required to use it productively. Therefore, read this section with a healthy pinch of salt.

Unlike the Planet Computers Gemini, Unihertz Titan, or BlackBerry Key2, the keyboard on this phone has a distinctly flat profile. There isn’t much distance between the top of a keycap and the actual chassis of the keyboard itself, which reduces keypress travel. Despite that, my experience showed it was reasonably comfortable to type on – although I admit I only wrote a few short passages of text.

The actual keypress mechanism is solid. Presses registered consistently on the first time, allowing me to build a steady cadence when writing with little need for self-correction.

I can’t imagine touch-typing with the F(x)tec Pro 1, even with the requisite muscle memory. The keys are just too small and narrow, forcing you to concentrate when using it. Despite that, the keys are still easy to find and hit, and I don’t recall accidentally hitting any other characters by accident.

One complaint is that the keyboard is rather wide. This is a consequence of the decision to accommodate a large screen with a conventional aspect ratio. That notwithstanding, I really had to stretch to reach the middle section of the keyboard with my thumbs. It didn’t feel particularly natural, but I still think it’s something I could eventually get used to with practice.

When the keyboard pops out, the phone’s display locks into place at a fixed angle. This was comfortable for reading and watching videos. It’s also arguably a preferable alternative to holding a phone for the duration of a Netflix binge, or carrying a separate kickstand wherever you go.

Where the F(x)tec Pro 1’s physical keyboard really shines is when it comes to multitasking. Although it’s long been possible to use Android apps in split-screen mode, this tends to fall apart when the virtual keyboard comes into play. With this handset, I was able to watch a YouTube video while working on a Google document.

One feature cribbed from the keyboard on the BlackBerry Key2 is the ability to assign shortcuts to individual keys. Like the latest BlackBerry model, you can press one button, and set it to open a specific app.

You can also set up chorded keyboard shortcuts, where you press several keys and perform an action. Sadly, I didn’t get a change to look at this in any level of detail, but it’s nice to know that F(x)tec has thought about the keyboard beyond it being a simple input device.

What about the rest of the phone?

Again, I want to emphasize here that this isn’t a review. I only got to use the F(x)tec Pro 1 for a relatively short spell.

But overall, my first impressions were good. As you’d expect from a phone with its specs, using this device was delightfully fluid. Apps opened quickly with little perceptible lag, and although it didn’t sport the best speakers on a phone I’ve ever used, the ones on the F(x)tec Pro 1 were certainly good enough for listening to podcasts and interviews.

It’s also amazingly well-built. The slide mechanism is based on a magnesium alloy that felt strong, and made me confident that it wouldn’t experience the kind of woes that afflicted the Palm Pre. The chassis is reinforced with aluminium, which is also a nice touch.

Ultimately, this is a device that’ll cater to power users. Those who want a physical keyboard. Those who want to customize their device to their heart’s content. If that sounds like you, you’ll be glad to know that TNW will take a closer look at the F(x)tec Pro 1 in the coming weeks. For a deeper dive into this intriguing handset, keep an eye out for our coverage.