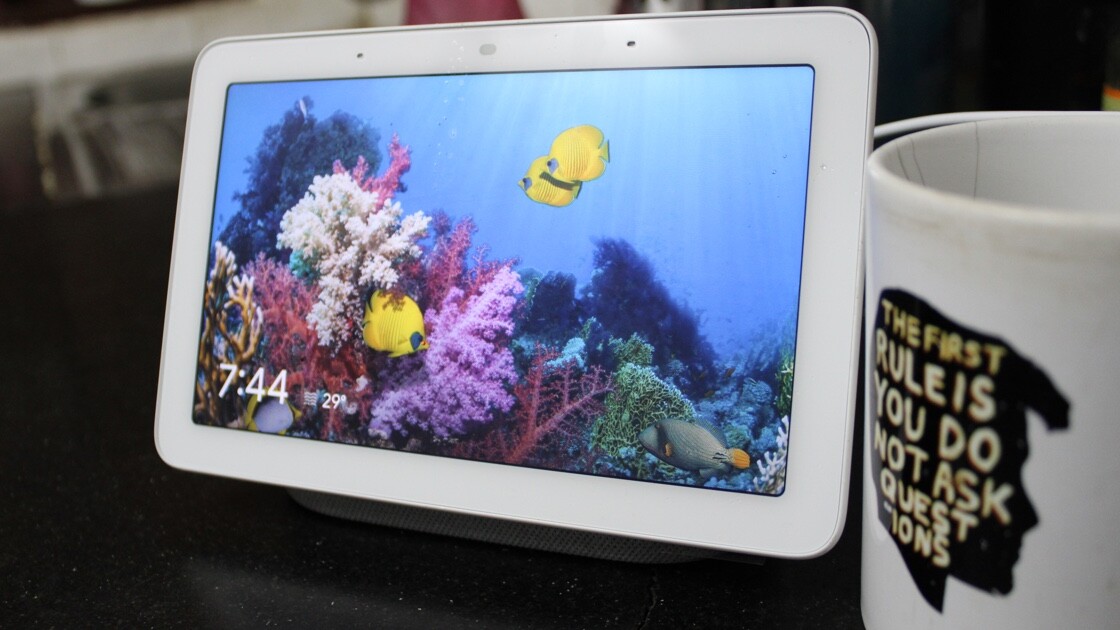 When Google was briefing a bunch of journalists including me about the Nest Hub at its India launch last week, it described how the smart screen could be useful in various parts of your home. But in my mind, it was clear where this would go – my kitchen.

I often carry my phone to the kitchen: to listen to music or podcasts while cooking, to check my progress on a recipe, or to keep an eye on the score of a match I’m following. Google’s Nest Hub can do all of this and more – hands-free.

While some press photos might give you an illusion of a sizeable device, the Nest Hub is more like a really large phone slapped on a speaker stand. I mean, larger than a Galaxy Note 10+. The 7-inch HD screen stands out in the front along with two mics to listen for voice commands, and an ambient light sensor. Google’s opted not to include a front camera for video calls, since many people think a household gadget like this could open them up to privacy intrusions. However, you can still make calls through the Duo app if you’re in the US, the UK, or Canada.

The display is bright enough to watch videos or read instructions when the device is placed on a kitchen countertop. It also acts as a photo frame when it’s in the Standby mode.

Plus, you can cast content from certain sources like YouTube and Hotstar; pretty handy when you have to spend more than a few minutes in the kitchen. Sadly, some popular apps such as Amazon Prime Video and Netflix won’t allow you to cast to the Nest Hub.

You might not enjoy watching videos if you’re more than a few feet away, so if the Nest Hub is in your bedroom or drawing room, you’ll end up using it more as a photo frame or a smart display.

I was worried about the screen failing to respond to touches when my hands were greasy or wet. However, with its anti-smudge, oleophobic coating, I didn’t have much trouble working with slightly filthy hands. Well done, Google.

The Nest Hub’s speaker gets pretty loud and can fill a small room. However, it doesn’t have a top-notch driver, so don’t expect it to deliver high-fidelity sound. It’s good enough for casual listening, and great for podcasts. That suits me just fine in the kitchen, where I’m happy to just have some tunes playing in the background while I cook.

For its smarts, the device relies on Google‘s Cast operating system – the same OS that handles all of Chromecast’s operations. Plus, there’s Google Assistant at your service to handle your queries and requests. There are no app icons you can launch, everything relies on your commands to the assistant.

The Nest Hub also acts like a control centre for all your smart devices. You can use your voice to control them, or swipe down from the top of the screen to go to a handy dashboard to see and manage them.

You can also set Routines to trigger multiple commands. I’ve set up a Routine for my kitchen to turn on my grill through a smart plug so I can toast bread, and to read me the news while I’m at it.

One of the main reasons I installed the device in the kitchen was to conveniently follow recipes. It does a brilliant job at does a brilliant job of finding and displaying them for when you have your hands full. You can also ask the Assistant to guide you through the step-by-step process of making a dish.

The smart display supports almost all leading music streaming services including global apps such as Google Play Music, Spotify, and Amazon Prime Music, and Indian music> apps such as Gaana and JioSaavn.

If you use Google Podcast as your primary podcast listening app, you can ask it to play an episode of your favorite show and it’ll pick up from where you left off.

Google Assistant still needs some work to recognize Indian voices. While it generally hit the mark with basic commands such as recipes and scores, it faltered with some song names and podcasts.

The Nest Hub launched in the US last year (as the Google Home Hub), it’s launching in India today; priced at Rs. 9,999 ($139). It competes with Amazon’s Echo Show 5 which has a tiny 5-inch screen and video calling; it costs you Rs 8,999 ($124). However, Google’s smart device has a clear advantage with a bigger, brighter screen, and a handy dashboard for smart devices.

Find the Google Nest Hub on sale in India at Flipkart, Tata Cliq. In the US, you can get it at Google Express.