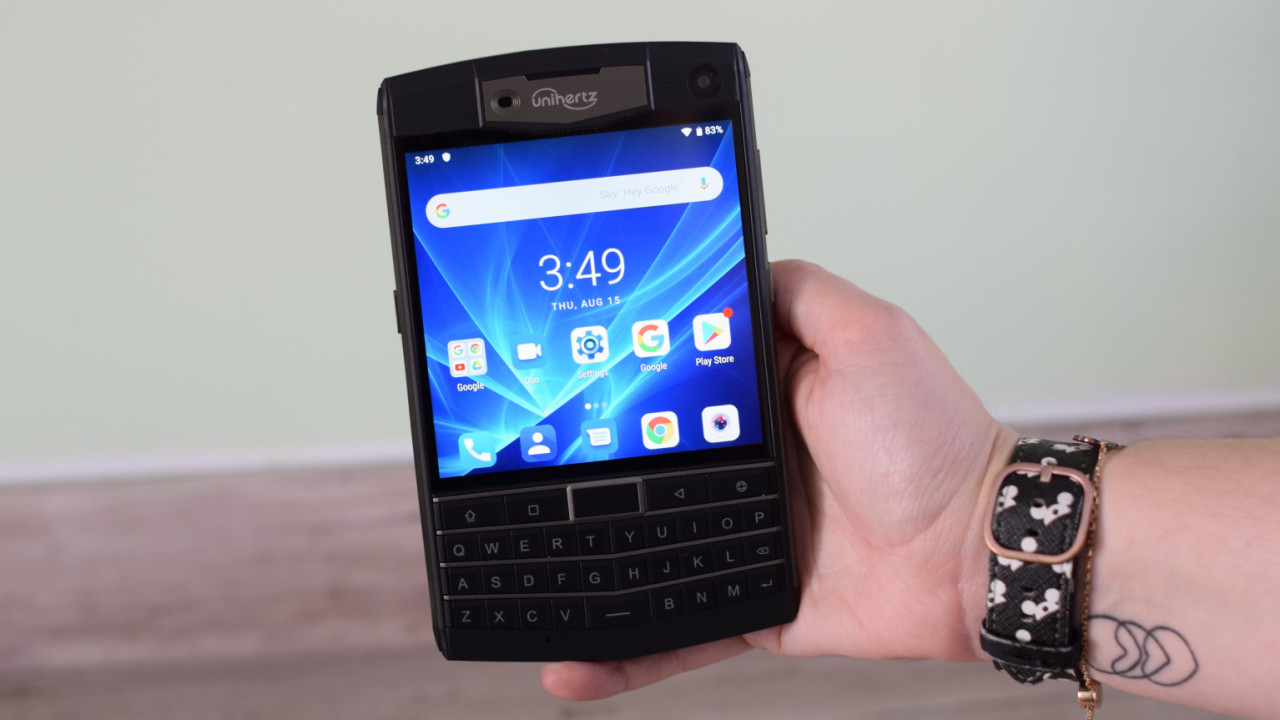 Phones are interesting again. Manufacturers, predominantly Chinese in origin, are designing quirky devices that target select, often narrow, demographics. A great example of this is the Unihertz Titan, which is currently in the process of being crowdfunded on Kickstarter.

This handset caters to the (presumably small) niche of people who desire a rugged phone with a physical keyboard and a widescreen display. It’s strongly reminiscent of the divisive BlackBerry Passport, albeit running Android 9.0, and with the inherent hardiness of a CAT phone.

In short: it’s weird. But also, I kinda love it.

I got my hands on one last month, and I’ve been testing it out. And while there are some areas where it doesn’t quite excel, it’s fundamentally a decent handset. Even if it doesn’t command mass-market appeal, it’ll undoubtedly make some people happy.

But first, a throat-clearing

Before we progress further, I want to emphatically state that this isn’t a review.

Why? As a general rule, reviews tend to be of finished products. That’s a deliberate editorial decision. When we test a product, be that a phone or some headphones, we want our experience to mirror the consumer experience as much as possible.

Shortly after our unit was dispatched, a Unihertz representative said that the device was a prototype, and the precise software and hardware configuration was still being developed, and was therefore subject to change.

With no way of knowing how close our experience will mirror the real-world consumer experience of using the Unihertz Titan, we won’t label this article as a review. You can call it a “first look” or a “hands on,” but it definitely ain’t a review.

Are we clear on that? Good.

The Unihertz Titan performed in-line with what you’d expect from a standard mid-range phone, with apps opening promptly, and no UI lag. It certainly outstripped the similarly rugged Doogee S40, which was the subject of a somewhat damning review earlier this year. This was thanks to the inclusion of a competent MediaTek processor, paired with a generous helping of RAM. You can read the full specs below:

As I said, that’s all fairly in-line with what you’d expect from a mid-range handset. The biggest aberration is the square display, which is relatively unusual, but not unheard of. The BlackBerry Key2, which I reviewed and loved, boasts a display with similar equilateral dimensions.

And yes, there’s the physical keyboard, which I’m itching to talk about.

I’m going to extensively contrast the Unihertz Titan with the more recent BlackBerry phones, because that’s the best frame of reference. Almost everyone still using a phone with a hardware keyboard will have a BlackBerry. And, for what it’s worth, it’s remains the gold standard.

Although physical keyboards aren’t to everyone’s taste, the current licensor to the BlackBerry marque, TCL, has done a good job of replicating what made the Bold and Curve of yesteryear special.

So, how does the Unihertz Titan compare? For the most part, fairly well, although I’d emphasize that it’s a fundamentally different typing experience to the Key2. In fact, I’d argue that it more closely mimics 2014’s BlackBerry Passport, thanks to it wider design, and therefore more spacious keyboard layout. It’s clear that Unihertz has taken great pains to ensure that this device doesn’t feel cramped.

The buttons on the keyboard are big and pressable. Using this device still took a bit of adjustment, however. I had to re-learn the muscle memories I’d developed from using the BlackBerry Key2. That’s because in terms of layout, the Unihertz treads a completely different path.

For starters, keys are arranged linearly. Q, for example, is directly above A. Compare that to the Key2, where buttons are placed at a slight offset in order to accommodate special characters and other punctuation.

Speaking of which, punctuation is added via a small on-screen virtual keyboard. This mechanism actually impressed me.

While typing, the phone’s keyboard software will show you a row of the most common special characters, like period, colon, and the question mark. To access more esoteric characters, you can tap a button which’ll show you the entire range of punctuation available.

Initially, my error rate while typing was quite high. This forced me to spend time backtracking on my emails, removing typos and other embarrassing errors. Fortunately, this became less of an issue as I familiarized myself with the device. That said, it still took time.

One major divergence from the Key2’s design is that the buttons are almost completely flat. That makes it slightly harder to touch-type, as you don’t have the tactile clues that distinguish keys from another. I also felt the keyboard was a bit squishier than the Key2’s, and didn’t have that same level of delightful clickiness.

Another major omission is backlighting, which is crucial when typing in dark environments, like when in bed or during a red-eye flight.

Of course, you can attribute much of my criticisms to personal taste. I prefer clickier, more tactile keyboards. Others might not feel the same way. And, as I said in my throat-clearing above, the specs and design of this phone are subject to change, so these criticisms might not be valid when devices roll out to consumers.

At the top of the keyboard is a row of shortcuts. These are far larger than ordinary keys and replace the hotkeys you’ll typically see at the bottom of a standard Android phone, allowing you to return home, or travel back through an application.

They also perform roles when inputting text. For example, the back key also doubles up as the backspace. This is fine, but there’s obvious room for software optimization. For example, if you’re typing your password and you make a mistake, you need to press ‘back’ the right number of times. Press it too many, and you’ll find yourself inadvertently leaving the application.

Like the Key2, the Unihertz Titan’s fingerprint reader is located on the keyboard itself. I’ve no complaints with this; it worked accurately and quickly. And, taking another page from BlackBerry‘s book, the keyboard on the Unihertz Titan is touch-sensitive, allowing  you to swipe through pages and menus by gently caressing the device.

What about the rest of the phone?

Broadly speaking, I have few complaints. The IPS display on this phone is gorgeously vivid, with accurate color reproduction. Blacks look black, and whites look white. It’s also wonderfully bright. Even on the most luminescent of days, the display remained readable, which is more than I can say for other rugged devices. (We’re looking at you, Doogee S40.)

I can’t imagine using this device to watch movies on my morning commute, thanks to its unusual aspect ratio. However, it’s good for other things, predominantly productivity tasks, like reading documents and composing emails.

Those willing to brave letterboxed films will appreciate the Unihertz Titan’s exceptional battery life. As I mentioned, It ships with a 6,000mAh cell, and in my experience of testing this device, can last over two days with moderate usage.

The phone’s built-in speaker isn’t the best. It produces a somewhat constricted and muddy sound regardless of whatever you listen to. Fortunately, it makes up for this with the inclusion of a 3.5mm jack, as well as Bluetooth.

Similarly, the camera didn’t impress much, with poor color reproduction, and low-light performance. The absence of a secondary camera also means it can’t produce the same stunning bokeh effects consumers have become accustomed to.

The Unihertz Titan’s other big selling point is its inherent ruggedness. While it’s undeniably girthy (and, at 303g, heavy) it’s accomplished this without looking unattractive. The display has tight bezels on its left and right flanks, and the rear of the phone is encased in a slip-free rubber, which doesn’t particularly attract fingerprints.

It is, however, measurably thicker than most conventional handsets.

The Unihertz Titan is an undeniably strange phone. That said, I really enjoyed using it.

It’s clear that Unihertz has tried to accomplish something new with this device. Although it made a few missteps along the way, particularly with the camera and (in my opinion) the tactile experience of the keyboard, the rest of the device felt polished. It didn’t particularly feel like a pre-production prototype, even though that’s what it was.

The keyboard isn’t as good as the one on the Key2, but I did appreciate how spacious it felt. I’d like to hope that it improves with future iterations of this device.

The Unihertz Titan feels like an homage to the BlackBerry Passport. It wins points for that alone. The Passport was an ambitious, but woefully underrated phone, released at the point when the Blackberry 10 operating system was in its final days. At the very least, I hope the success of this device (the Titan has already blown past its modest Kickstarter goal) inspires TCL to review this form-factor.

If you want to prove me wrong, you can back it on Kickstarter. Pledging at least $259 gets you a Unihertz Titan, with devices expected to ship by Christmas this year. When it eventually hits retail, the company expects it’ll sell for $359.

For what it’s worth, I can imagine it’ll be of interest to those working in challenging environments, like building sites and oil rigs. It’ll also appeal to the nostalgic BlackBerry fans among us. You know – like me.

Before we wrap up, here’s our standard Kickstarter disclaimer: when supporting a crowdfunded product, remember that you’re not buying something, but rather casting a vote of faith in an idea. There’s always the potential that a device won’t ship, will be late, or will differ from the originally advertised product.