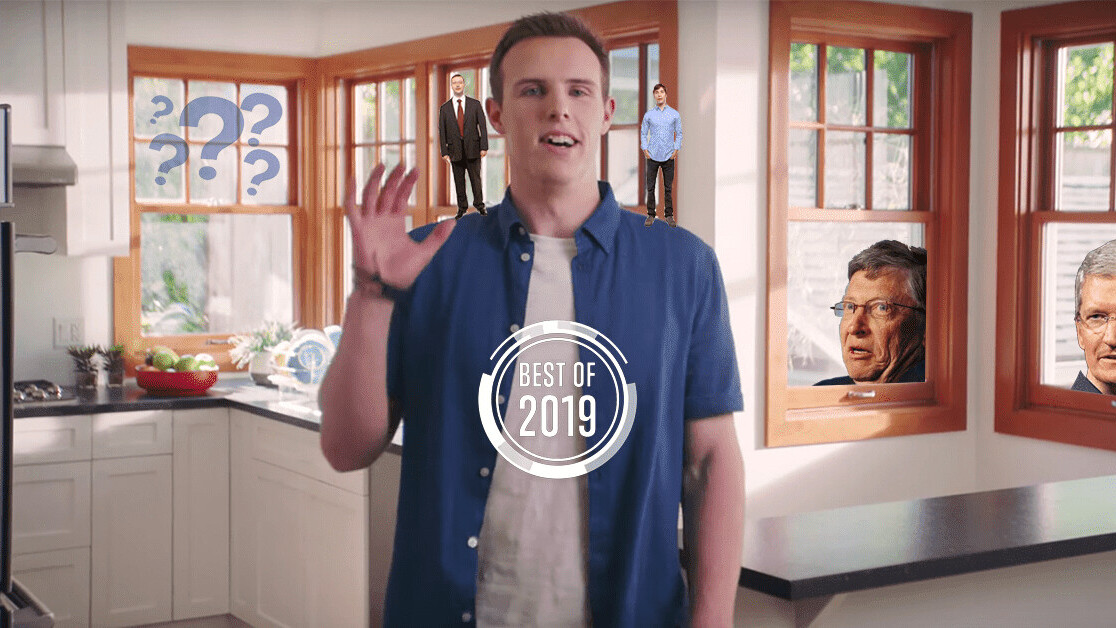 Sometimes, like a soothsayer of shittiness, you know something is terrible before you even see it. And one of those things is Microsoft’s new advert for its Surface 2 laptop.

In this… opus, a man literally called Mac (short for Mackenzie) Book talks bollocks about why Microsoft’s machine is superior to its Apple counterpart. I knew it’d be dire, but, little did I know quite how bad it’d be.

And, like all sensational art, the advert raises some questions. Well, a lot of questions. Here are some of them.

Why did they choose “Mac Book” as a name rather than “Apple”?

Put simply, the central concept of the video makes no fucking sense. Look, I get it what Microsoft’s trying here — Mac Book is not only the person’s name, but also the name of their biggest competitor’s laptop.

The entire ‘joke’ is that aforementioned double meaning, but it’s totally nonsensical, and not even in a whacky way. A Macbook never communicates, so the play on words of Mac Book (or is it MACBOOK LOL) making a claim falls flat.

It’s sloppy and awkward, and the more time I’ve spent thinking about it, the stupider it becomes. Like, if you‘re at all committed to this bit, find someone called Apple. Kidnap Gwyenth Paltrow’s and Chris Martin’s child if you have to. Then you could have an overlay exclaiming “Apple says Surface lasts longer” and it actually makes fucking sense. Really, Microsoft, really? Like, really? Really? Really?

Who the hell is Mac Book to tell me shit?

What are your credentials here, bud?

Just because my last name is ‘Booth’ doesn’t mean I have any understanding how phone booths or toll booths actually operate. You wouldn’t come to me if you were planning on upgrading a selection of traffic kiosks on the strength of my surname. I can categorically say that’d be the worst mistake you’d ever make. My entire selection rationale would revolve around which booth I think looks the most bitching, which, unfortunately, is no way to actually run a business.

I’m sorry, Mac Book, but I do not value your opinion on this matter.

Also, I refuse to believe ‘Mac’ is a name people use in real life. It’s a TV name. Like Chad, or Cletus, or Gunther.

Why do they emphasise Mac Book’s real person-ness, yet film him in a house that cannot be lived in by a human being?

Picture your kitchen. Like really think about it. Where things are, how it’s organized — just really conjure an image.

Now, look at this:

There are two types of people who might have a kitchen laid-out like this. The first are not from this planet, and therefore wouldn’t bother with human distractions like taps. The second type of people are non-existent. Nobody keeps a kitchen like this.

Let’s check this layout. First, I count five plants. Five. A kitchen counter is not the place to keep so much flora, like where are you actually going to chop anything here? On the floor? In the sink? And this is without mentioning the possibility of bits of plant ending up in your omelette.

Next, the fruit. Why the hell is that bowl there? It’s a travesty. A quick experiment, do a Google Image search of “fruit bowl painting” and tell me how many of them are next to a hob. What’s that? None? Weird. It’s almost like human beings don’t keep fruit bowls next to a fire source.

Also, what the fuck is this:

At first I thought it was a salt or pepper shaker, but there’s not a pair of them, so that’s out. It’s too small to be an effective oil holder, and too big and alone to be filled with spices. It has no place in a functioning kitchen.

And yes, I’ve heard of video sets. I know they dress scenes to look fancy on camera. But the core of this advert revolves around Microsoft finding “real person called Mackenzie Book,” something I assume they want some sort of credit for (great, you have access to a directory, cool, nice one, terrific).

Basically, putting this “real person” into an obviously fake house makes me question just how “real” this “person” actually is. What I want is simple: birth certificates. Release them.

Who does this arm belong to?

Throughout the video, Mr. Book spends his time conversing with a smug disembodied voice. Apart from the moment pictured above. This single, joyous time where a muscular arm shoots across the screen like a veiny lightning bolt. But… who is this?

Using the height and make-up of the arm, we had our crack team of visual artists and forensic experts throw together this visualization:

Shocking if true. Microsoft owes us some answers.

How much did the person behind this advert get paid?

There are certain movies I watch and think: “this is not the work of a person, no, this, friends, is the work of cocaine.” Watch Showgirls and tell me otherwise.

Well, I’m getting the same energy from this advert. It would’ve been a Thursday night. Work drinks. After a few pints, someone in a pin-striped suit winks at someone in a light grey one. Now, it’s 3am, another line of laxative-cut powder shoots up their nostrils, and it hits them. They turn to their buddy, wide-eyed: “What if we do an advert with someone LITERALLY CALLED Mac… wait for it… Book.” Confetti falls and angels sing.

So, to answer the original question — probably not as much as their habit costs.

On that note, what’s the price of someone’s dignity?

I’d guess around the amount ol’ Mackenzie Book was paid.

And how on earth is Microsoft still salty about those old PC vs. Mac adverts?

I’m not sure, but I do know one thing. This is proof, truly, that no matter how rich or successful someone becomes that, at the end of the day, we’re all just petty and pathetic on the inside.

An inspiring vibe from Microsoft. We can all learn from this.