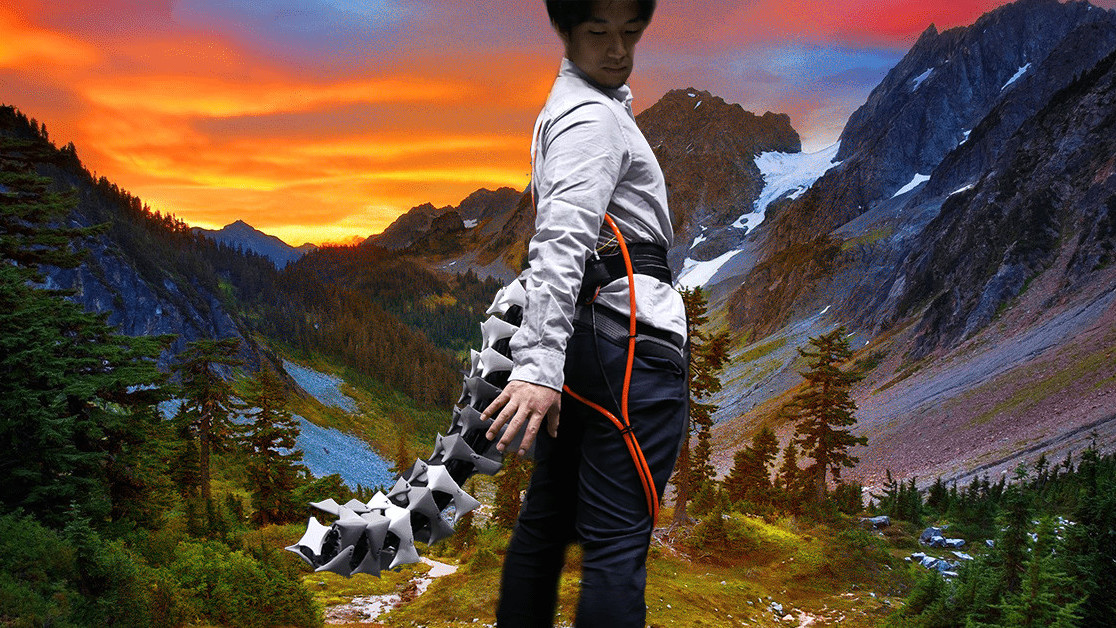 There are two kinds of people in the world: those who look at monkeys and think “damn, having a tail would be fucking awesome,” and liars.

While most of us just imagine though, others create. So, enter the Arque – a mechanical tail that allows humans to experience the benefits our extended-backbone brethren take for granted. Just look at this thing:

The Arque was announced in the run-up to SIGGRAPH 2019, as part of the event’s Emerging Technologies line-up. It’s a collaboration between a number of Japanese creatives, specifically, Junichi Nabeshima, MHD Yamen Saraiji, and Kouta Minamizawa from the Keio University Graduate School of Media Design.

They describe the idea behind the Arque as thus:

“For most vertebrate animals, [the] tail plays an important role for their body, providing variant functions to expand their mobility. In this work, Arque, we propose an artificial biomimicry-inspired anthropomorphic tail to allow us to alter our body momentum for assistive and haptic feedback applications.”

To put that into simpler terms, the Arque is a tail that automatically shifts body balance. This can be used in a supportive way (such as stopping you from falling) or in a disruptive way (like putting you off balance in a video game).

To sum up some of the important parts, the Arque straps around your waist and has an adjustable weight and length, meaning it will work on different body types. Inside the tail, there are four ‘muscles.’ This means the Arque can apply force in eight directions to help keep the user steady.

Another tasty fact is the inspiration from this design came from seahorses, which I think we can all agree is badass.

Jokes-aside, there could be some genuinely useful functions of the Arque. It could be used as part of rehab to build balance, support manual labourers when they’re moving heavy objects, or assist the elderly or disabled with movement and prevent them falling.

Plus, the Arque also looks cool as fuck.

Let’s hope this experiment eventually becomes a commercial reality, I mean, how else are we going to live our tail-related fantasies?