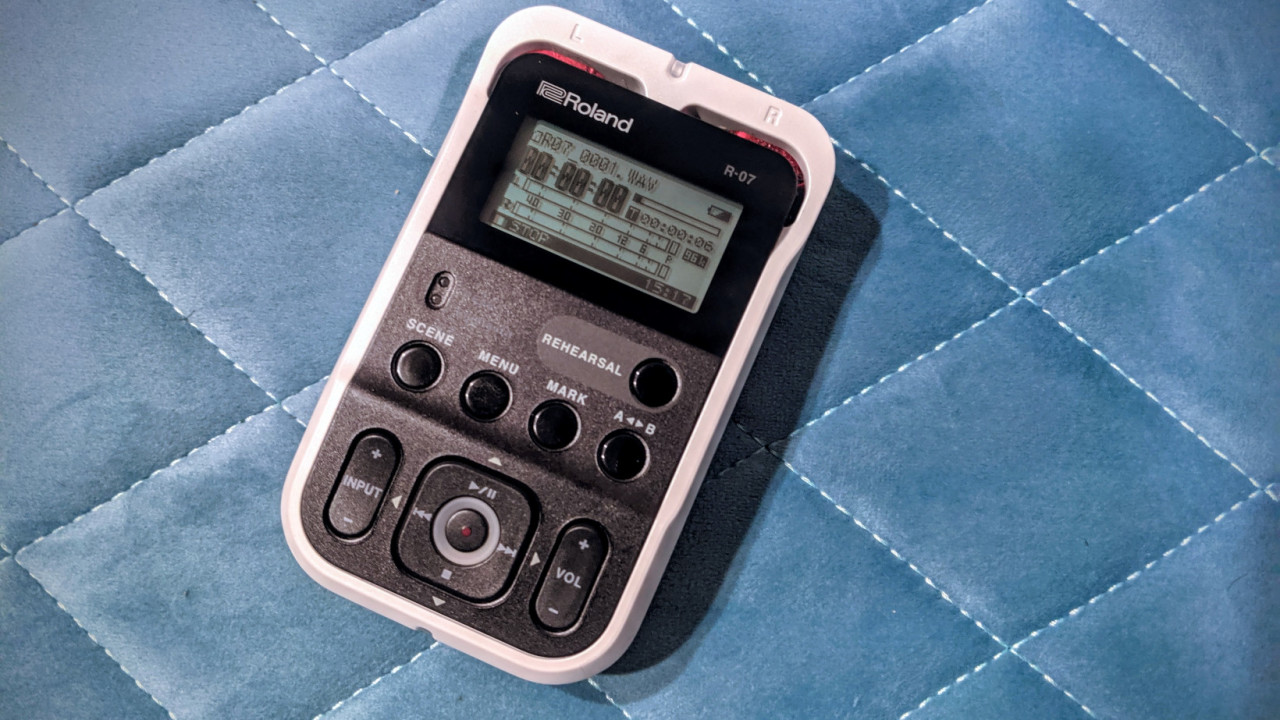 There is no shortage of portable recorders on the market, but the Roland R-07 caught my eye with its unique looks. Add to that the fact that it’s one of the only such recorders with Bluetooth, and it makes for a compelling package that stands out in the market.

At $199, It’s somewhat of a midrange recorder – not as expensive as the flagship Zooms and Tascams of the word, but able to provide a more-than-obvious improvement over what you can capture on your smartphone.

First, some key specs and features:

For such a compact entry-level device, the R-07 has a wide array of features that should cover most people’s use cases. And I do mean compact; it’s about the size of a bar of soap or deck of cards, and should be pocketable for most users (not that I often go pocketing bars of soap).

The interface is easy to understand. A ‘scene’ button lets you quickly switch between settings optimized for different scenarios. ‘Music HiRes,’ for instance sets it to the maximum quality setting and enables the limiter to prevent clipping. But if you’re just using the recorder for Voice memos, an appropriate scene will reduce the recording quality to save space and add automatic gain control to make sure your voice stays a consistent volume.

There’s also the handy ‘Rehearsal’ button, which allows you to do a quick mic check to allow the recorder to automatically set the best settings for your recording environment and input levels. And for other features, you can enter the menu, from which you can extensively customize settings, as well as find the metronome and tuner functions.

Bluetooth capability is neat, as it’s not something you see on other products – although it’s not without caveats. If you’re using Bluetooth headphones to monitor your recordings, there will be a slight amount of lag unless your headphones support AptX Low Latency (few do, and wired headphones will still be faster). It’s fine if you’re recording an event or scene, but noticeable enough to be distracting if you’re using it to record yourself playing an instrument or singing.

The Bluetooth remote is obviously useful if you need to control the recorder from a distance or need to be stealthy – not something you can do with the competition as far as I’m aware. It was rather unintuitive to set up – you’ll want to read the manual – but otherwise worked smoothly. You will not, however, be able to use Bluetooth to access the recordings from Roland’s app – it’s strictly for controlling the recorder.

Of course, a recorder has to perform in the audio department, and the R-07 sounds crystal clear. While it’s not going to replace a studio mic, I was consistently impressed with its performance and the sense of space the two closely-spaced mikes were able to capture. Of particular note is how effective the hybrid limiter is at preventing clipping, which can quickly ruin a recording on other devices during recordings with high dynamic peaks.

At a street price of $199, there’s a whole lot to like about the R-07. It’s compact, it sounds good, has enough features to satisfy most users, and it’s one of very few recorders with Bluetooth support. It’s not as densely packed with editing features as some other products, but it gets the basics right and adds some genuinely useful tools you won’t find elsewhere. That it looks good too is just a bonus.