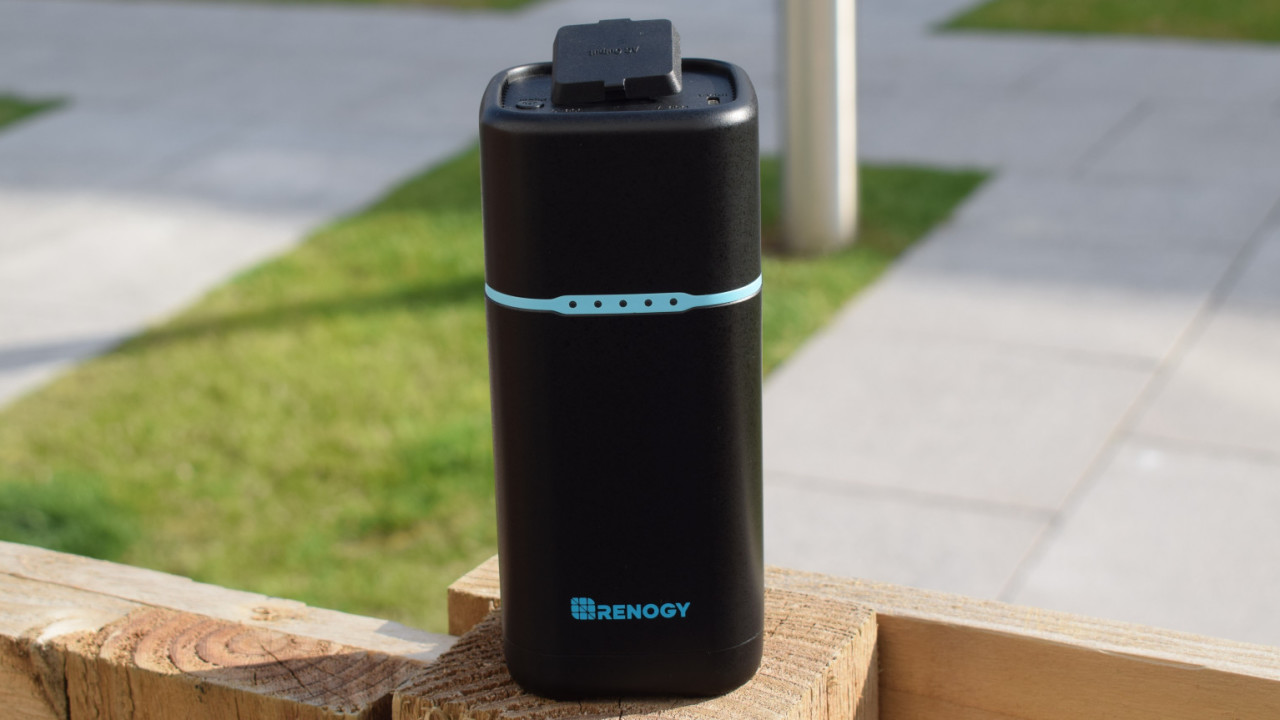 Batteries. Odds are good you’ve got one in your handbag or rucksack. When your phone is low on juice, they’re extremely handy to have.

But what if you’re travelling far, and you need to keep your larger electronics charged, like your laptop?  For that, you need a portable power station, like the Renogy Phoenix 100. This block of lithium and plastic can power all your consumer electronics, as it comes with with AC out, as well as a generic USB-A port.

While it’s not as capacious as some power stations we’ve seen, it’s also reasonably small, and can comfortably fit in a satchel or handbag. Furthermore, it complies with TSA regulations, which state the largest battery you can take onboard a flight is 27,000mAh, or 100 watt hours.

This’ll be a fairly short review. After all, there’s only so much you can say about a battery – even a large, sophisticated one.

The design is fairly straightforward. The Renogy Phoenix won’t win any prizes for aesthetics. It’s a tall obelisk of black plastic. The sole flash of color comes from the light blue band that distinguishes the charging section from the battery itself, as well as the battery status lights, which indicate how much juice you’ve got left.

On the top of the device, you’ll spot the two aforementioned ports, as well as the USB-C port you use to recharge the device.

The AC socket is protected by a flexible rubber flap, which prevents debris from getting in.

This felt sturdy, and I didn’t notice any of my devices coming loose once inserted, even when roughly thrown into a rucksack while moving between coffee shops.

The model provided to TNW came with a US-style plug. This wasn’t a problem, as although I live in the UK, I’ve got a fair bit of gear acquired from American sources.

Renogy says that it can charge a laptop as many as two times. That wasn’t too far off the mark. I tested it out with a Windows-based ultraportable, and I was able to extract one full charge, plus a partial charge, from the device.

The Phoenix 100 can charge smaller devices multiple times between recharges. Renogy reckons it can replenish a smartphone between 6 to 9 times. Obviously though, your mileage varies depending on the battery capacity of your device. Android phones tend to have larger batteries than their Apple brethren. Using the Phoenix 100, and I was only able to completely charge my Huawei Mate 30 Pro five times. That’s still fairly respectable.

At the bottom of the device is a fan, which is used for thermal management. This isn’t too loud, but I’d certainly feel self-conscious about using this on a plane. After all, most consumer-grade batteries don’t have fans.

The biggest downside of this is that it requires you use the device on a flat surface. I tried using it on a grassy surface, and it ended up getting caught in the individual blades of grass poking up through my lawn.

That being said, it does a sterling job of keeping the device cool. At no point did it strike me as dangerously – or even uncomfortably – hot.

If you’re tempted, you can grab the Renogy Phoenix 100 from Amazon for $159.99. That’s a lot, as far as batteries go, but it’s actually fairly cheap by the standard of portable power stations, which are typically geared towards more demanding users. The Anker Powerhouse, for example, retails at $500, although this has several factors more juice within its rugged internals.

Overall, I was impressed. The build quality is great. It’s not flashy, but it gets the job done, and would be the perfect complement to any road trip.